Gateway of India? Taj Mahal Hotel - in Mumbai? What - and Where - Are These Places?

I looked up some spots in Mumbai that have been in the news lately: Gateway of India; Nariman House; Taj Mahal Hotel; and Oberoi Hotel. They're among the ten places hit by terrorists yesterday.

The reason I concentrated on these four is that, unlike the Chhatrapati Shivaji railway station and the Cama and Albless Hospital, they've shown up quite often in the American and international English-language news I read.

The information didn't quite fit into the two posts I've written so far, and I hate to let research go to waste, so here's a little background on what I'll call the international targets in Mumbai.

(from Hotels in Mumbai, used without permission)

King George V and Queen Mary of England visited Mumbai in 1911. The Gateway of India's foundation stone was laid that year, the foundations finished around 1920, and the Viceroy, Early of Reading, opened the monument on December 4, 1924.

In 1947, the last British troops left India by way of the Gateway. 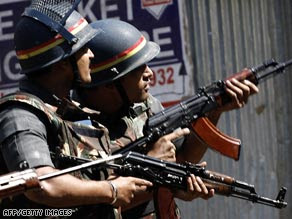 "
(from CNN, used without permission)

This place is a little hard to find, outside news articles, since it's called Chabad of India. No wonder the terrorists hit this place. It's "a Jewish organization that provides social, educational, and religious programing for all.... An institution where you can question your faith and not be afraid of judgment....

"...where one can gain a deeper understanding and appreciation of ones Jewish heritage...."

(from Chabad of India, used without permission) 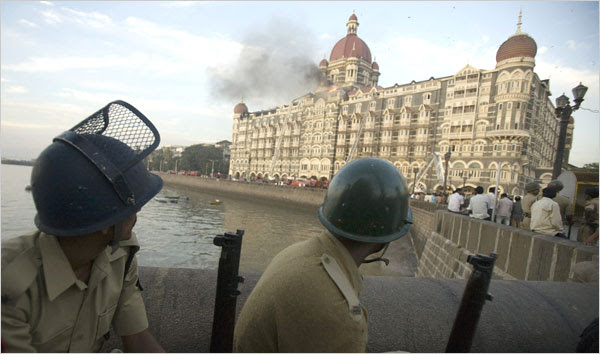 (from The New York Times, used without permission)

The Taj Mahal Palace & Tower, Mumbai is what happened when architects used Moorish, Oriental and Florentine styles to design a seriously upscale hotel. They also used a lot of wood, which is part of the reason that parts of it are still on fire today.

(from DelhiTourism.com, used without permission)

The The Oberoi Hotel, Mumbai, is an award-winning (literally) and very expensive hotel, which seems to focus on business travelers.
Their home page is displaying this message, at the moment:

"We all are deeply saddened by the tragic events in Mumbai.
We are very concerned about the safety of our guests and staff at the hotels in Mumbai. Our thoughts are with their families.

"Despite all efforts we are unable to make contact with the persons inside the hotel. Therefore at present, we do not have more information than what is being relayed by the media. We will update you as soon as we have confirmed information on further developments....

"...The safety of our guests and staff remains our primary concern.

"If you have any questions or need assistance in making contact with your family or friends that may be at the hotel, please call us at +91-11-2389 0606 or call Toll Free. Our attempt will be to assist you as best as we can."

Bangalore, often termed to be the Silicon Valley, holds a major chunk of the responsibility of transforming India into an economy to reckon with that it is now and a prospective superpower in the near future. The excellent weather, the warmth of the people, and the beauty of nature have always put Bangalore on the high ranks in a travelers’ book. In the past decade or so Bangalore has become the IT capital of India and immediately the city saw a phenomenal spurt in its tourism sector. Bangalore was no longer a leisure traveler’s delight, but the city became a major financial hub. Soon delegates from all over the world had to visit the city. In keeping with the taste and travel inclination of the international delegates and business travelers a number of world class luxury and business hotels in Bangalore were opened. Big names in the hospitality industry like the ITC Welcom Group, the Taj Hotels etc have multiple hotels in Bangalore. Only recently Taj opened its 5th property in this beautiful south Indian city. A few months back ITC Welcom Group also opened its 2nd property in Bangalore. The hospitality industry is also opening budget hotels in Bangalore that have a fine mix of business and luxury in a flexible budget.

Spam it may be, but there's so much useful background information in your comment that I'm keeping it.

The Fortune Park Hotels Ltd comment, though spammish, was somewhat relevant to the post, with regional information.

England and Scotland, although historically connected with India, are not in the geographic region, and British bed & breakfasts have only a tenuous relevance to this post.