Quite a few folks stopped living rather abruptly in Algeria a few hours ago. Some of them were hostages, killed by their captors. Others were the killers.

I'm not happy about that. It's a tragic situation. But I'm not surprised, either.

I think that most folks are decent enough people, who want to raise their families, earn a living, and live with some degree of security. They're no more likely to take over an industrial facility and kill hostages than I am.

On the other hand, some folks simply aren't nice. They don't behave well, even if they're asked politely. When they behave badly for personal reasons, we often call them criminals. When their motives are more ideological, news media tends to call them "militants." Another term is "terrorist." Either way, they're - - - simply not nice.

There have been relatively tranquil eras. This isn't one of them: Particularly for a place folks have been calling Algeria recently.

Folks have been living in that part of north Africa for upwards of 1,800,000 years, but our records start much more recently: around the time that king Gala had ties with Cathage, and king Syphax sided with Rome. You hardly ever hear about Massylii and Masaesyli these days, and that's another topic.


Carthage, Chlodowech, and All That

Roughly two millennia after the Carthage-Rome wars, Chlodowech's successors invaded and held this territory. By that time Chlodowech's Franks had taken over a good-sized chunk of Europe: what we call France: and that isn't quite another topic. 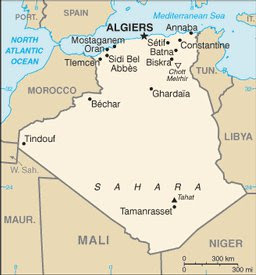 About two centuries ago, France took parts of north Africa from the Dey of Algiers, who ran part of the Barbary States, which was a sort of client of the Ottoman Empire - a whole lot more topics.

France lost control of Algeria about a half-century back. These days, Algeria's called (الجمهورية الجزائرية الديمقراطية الشعبي, or Al Jumhuriyah al Jaza'iriyah ad Dimuqratiyah ash Sha'biyah, or the People's Democratic Republic of Algeria. I'll stick with "Algeria" for the rest of this post.

Folks in Algeria, along with just about everyone else in that part of the world, have had their hands full: sorting out the mess left from centuries of colonial rule and the Versailles treaty. More topics. 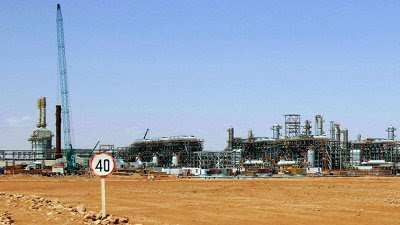 Ideally, Algeria's President President Abdelaziz Bouteflika would have politely asked the militants to please let their hostages go: after which Mokhtar Belmokhtar and company would have released them. After, of course, resolving whatever misunderstanding had prompted the raid in the first place.


Crime, Death, and Other Unpleasantness

We don't live in an ideal world, and that's not how things work.

The United States government tried acting as if taking hostages, blowing up airliners, and similar activities, were crimes: the sort of thing we generally let the police force and social workers deal with.

Eventually, America's policy became 'we will never negotiate with terrorists.' As I recall, this happened during the Reagan administration. What we're supposed to remember about that president is Oliver North, so maybe it was somebody else. Or, not.


"Never" and a Grain or Two of Salt

Particularly where national policy is concerned, I take terms like "never" with the proverbial grain of salt. Anything involving human beings is going to get very complicated, very fast, and "never" is a fairly simple idea.

Even so, I think the basic idea is sound. Folks who run outfits like Al Qaeda are very unlikely to change their minds about killing anyone who doesn't agree with them. Given the circumstances, I don't think it makes sense to "negotiate" with them in hopes that they'll start behaving nicely.

It's fairly easy for me to have that opinion, since I don't know anyone who died as a result of what those "militants" did in Algeria. If I did - well, that's a hypothetical situation: one which I hope I never face.

I gather that this particular run-in with "militants" was handled by the Algerian government. Even so, a spokeswoman for the American State Department repeated what's been this country's policy for a few decades: "The United States does not negotiate with terrorists." (FoxNews.com)

Harsh as it may seem, I think it's still a good idea.


"Algeria crisis: 'Captors and hostages die in assault' "
BBC News (January 19, 2013)
"Algerian troops have ended a siege at a gas facility in the Sahara desert killing 11 Islamist militants after they killed seven hostages, Algerian state news agency APS has said.
"The hostages were summarily killed as the troops tried to free them, it said.

"Foreign workers were among the hostages, but the nationalities of the dead are not known.

"UK Defence Secretary Philip Hammond confirmed the crisis was over and that lives had been lost.

"At a joint news conference with his US counterpart Leon Panetta, Mr Hammond said the loss of life was 'appalling and unacceptable and we must be clear that it is the terrorists who bear sole responsibility for it'.

"Britain was pressing Algeria for further details, he added.

"Mr Hammond said the kidnappers' leaders would be 'held to account for their actions'.

" 'The full force of the UK and US and other allied countries will bear down upon them,' he said.

"The militants had been involved in a stand-off since Thursday after trying to occupy the remote site.

"On Friday, 573 Algerians and about 100 of 132 foreigners working at the plant were freed, Algerian officials said...."
"One American dead in hostage siege in Algeria"
FoxNews.com (January 19, 2013)

"Algerian authorities gave no indication of how many people were still captive at natural gas complex in Algeria the day after an American worker was found dead at the plant and the U.S. sought to secure the release of Americans still being held by Al Qaeda-linked terrorists.

"Frederick Buttaccio, a Texas resident, died of a heart attack during a raid by the Algerian military to end the standoff, Fox News confirmed Friday. The general manager of the complex, Mark Cobb, also of Texas, was able to escape with members of his Algerian staff and is safe....

"...It was not immediately clear whether Buttaccio was the only American killed in the hostage standoff....

"...Secretary of State Hillary Rodham Clinton said she spoke by telephone with Algerian Prime Minister Abdelmalek Sellal to get an update on Americans and others in danger at the sprawling Ain Amenas refinery 800 miles south of Algiers. She said the 'utmost care must be taken to preserve innocent life.'...

"...Clinton talked to reporters after the Obama administration confirmed that Americans were still being held hostage, even as some U.S. citizens were being flown out of the country for recovery in Europe. The Algerian state news agency reported that 12 hostages had been killed since Wednesday's start of an Algerian rescue operation, and world leaders steadily increased their criticism of the North African country's handling of the attack....

"...Clinton, however, defended Algeria's action. 'Let's not forget: This is an act of terror,' she told reporters in Washington. 'The perpetrators are the terrorists. They are the ones who have assaulted this facility, have taken hostage Algerians and others from around the world as they were going about their daily business.'...

"...Still, the U.S. flatly rejected an offer by the militants -- led by a Mali-based al-Qaida offshoot known as the Masked Brigade -- to free two American hostages in exchange for the release of Omar Abdel Rahman, a blind sheikh convicted of plotting to blow up New York City landmarks and considered the spiritual leader of the 1993 World Trade Center bombing, and Aafia Siddiqui, a Pakistani scientist convicted of shooting at two U.S. soldiers in Afghanistan. Both are jailed in the United States.

Dead Bodies at the University: Business as Usual in Syria

Several dozen folks were killed in a series of explosions at the University of Aleppo. I doubt that their friends and relatives are comforted by the idea that this sort of thing happens fairly often in Syria.

The explosions were probably:
Syria is a mess, and who did what to who and why is hard to sort out.

"The explosions reportedly struck an area between the University of Aleppo's halls of residence and the architecture faculty on the first day of exams.

"The Syrian Observatory for Human Rights put the death toll at 52, but Aleppo's governor said 82 people had died.

I'm slightly more inclined to believe folks that state TV calls "terrorists" in this case: but I really don't know who's telling how much of the truth. It does occur to me that dead students gave Syrian enforcers a dandy excuse to to attack enemies of the state.

Syria has had the sort of "stable" government that plagued much of the 20th century, and I've been over that before.

The situation in and around Syria is complicated, putting it mildly. At the UN, 50 countries want the Syrian conflict referred to the International Criminal Court; and Russia doesn't. Maybe Russia's government is right: then again, maybe not.

Ideally, Syria's ruler would recognize that some of his subjects have grievances: and deal with issues calmly and sensibly. We don't live in an idea world, and that's not happening.

Worse, from the point of view of folks who want 'stability,' folks in Syria and elsewhere have found out about freedom and the Internet. Quite a few people who aren't running 'stable' countries have gotten tired of reforms that never came.

And that's another topic.