Malaysia Airlines Flight MH17: This Time it's Over Land (From Reuters, used w/o permission)
("Debris is pictured at the site of Thursday's Malaysia Airlines Boeing 777 plane crash, near the village of Grabovo in the Donetsk region July 18, 2014."
(Reuters))

The good news is that nobody, as far as I have heard, is claiming what happened to Malaysia Airlines MH17 as a glorious victory or heroic act. Remarkably, the outfits most likely to have shot another airliner out of the sky are saying 'it wasn't us.'

Killing nearly three hundred folks whose greatest offense seems to have been in the wrong place at the wrong time isn't good public relations. Not these days. 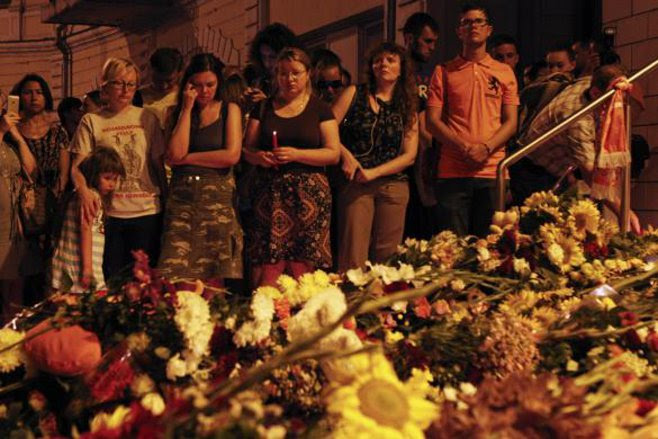 (From Valentyn Ogirenko, via Reuters, used w/o permission.)
"People light candles at the Dutch embassy for victims of Malaysia Airlines MH17, which crashed in eastern Ukraine, in Kiev July 17, 2014"
(Reuters))

More than half of the folks killed yesterday lived in the Netherlands. That's no surprise, since they were traveling from Amsterdam to Kuala Lumpur.

At least one body went through someone's roof, but happily nobody on the ground was killed: as far as I have heard. Folks working for Malaysia Airlines and the various governments involved are probably still trying to sort out who was actually on the flight. So far, it looks like folks from 11 countries won't be going home. Not alive, anyway:
News coverage, understandably, concentrates on what folks with titles are saying: and on the "important" folks who stopped living yesterday. I found one news service that gave a list of the folks who have been tentatively identified as being on MH17. Instead of breaking out the names by country, as they did, I've put the names in alphabetical order, by 'first name.' The article didn't give names for some of the children:
By any reasonable standard, this is a very sad situation for many families.

"U.S. President Barack Obama demanded Russia stop supporting separatists in eastern Ukraine after the downing of a Malaysian airline by a surface-to-air missile he said was fired from rebel territory raised the prospect of more sanctions on Moscow.

"At least one American was among the almost 300 killed, he said, a revelation that raises the stakes in a pivotal incident in deteriorating relations between Russia and the West....

"...But, noting the global impact of the crash, with victims from 11 countries across four continents, he said the stakes were high for Europe, a clear call for it to follow the more robust sanctions on Russia already imposed by Washington.

"Russia, whom Obama said was letting the rebels bring in weapons, has expressed anger at implications it was to blame, saying people should not prejudge the outcome of the inquiry.

"There were no survivors from the Malaysia Airlines flight MH17 from Amsterdam to Kuala Lumpur, a Boeing 777. The United Nations said 80 of the 298 aboard were children. The deadliest attack on a commercial airliner, it scattered bodies over miles of rebel-held territory near the border with Russia...."

As far as I can tell: some folks in Ukraine who were doing well in their 'good old days' want to get back in power; at least some Russian leaders want Ukraine back in Russian hands; and quite a few Ukrainians want to run their own country.

I'm inclined to sympathize with my counterparts in Ukraine: 'unimportant' folks who want to raise their families; vote in elections that aren't rigged; and live without having their 'betters' deciding what they should buy, and who they should deal with.

The situation in Ukraine is not simple. Folks have been living there for nearly three dozen millennia. About a thousand years back, from the time of Володимѣръ Свѧтославичь to Ярослав Мудрий's death, descendants of the Væringjar ruled the most powerful state in Europe. Things went downhill after that, and that's another topic.

The point is that, after tens of thousands of years: Ukraine has a rich cultural, economic, political, and religious heritage: and no shortage of soreheads, in which respect they resemble people everywhere.

There's a lively blame game going on, but all I can be sure of today is that nearly three hundred people are dead.

I think it's possible, perhaps even likely, that this massive tragedy was an accident of sorts. Some trigger-happy fool or paranoid field commander may have mistaken the airliner for something else: a guided missile, flock of birds, whatever.

I don't know what happened. Ukrainians may lose their country — again. And a whole lot of families are mourning.

I do know that this isn't the world I grew up in. In some ways, it's better. We still have petty tyrants, clueless leaders, a scattering of wise people, and the usual assortment of oddballs. But I think many folks have realized that John Donne was right: we're all connected, part of humanity.

The Other Malaysia Airlines Disaster 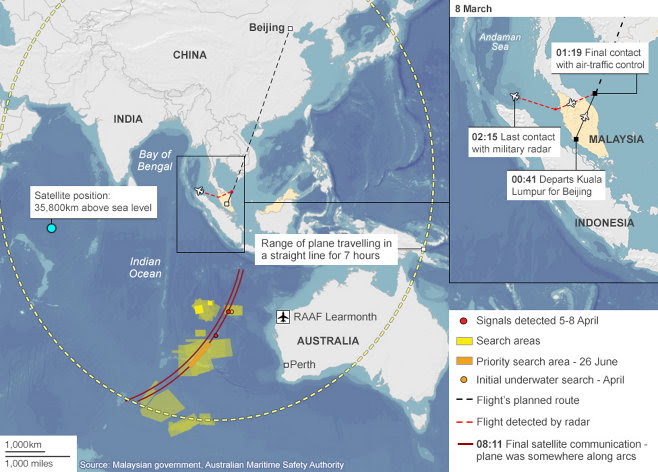 (From BBC News, used w/o permission.)

"Mystery continues to surround the fate of Malaysia Airlines flight MH370, which disappeared en route from Kuala Lumpur to Beijing on 8 March.
"Investigators have identified a new search area 1,800km (1,100 miles) off the west coast of Australia, covering an area of some 60,000 sq km.

"The latest zone is some 1,000km south west of the area which was extensively searched with underwater surveying equipment in April.

"Work will resume in August and take up to a year to complete.

"Malaysian authorities, assisted by international aviation and satellite experts, are continuing their attempts to piece together the plane's final hours and explain what happened to its 239 passengers and crew. Some preliminary details were released on 1 May in a short report...." 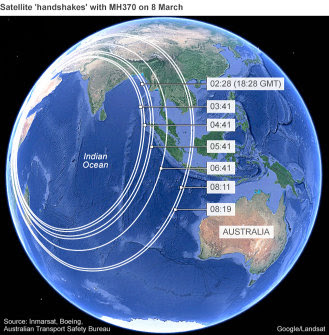 Today's information technology isn't universally loved, putting it mildly. Some folks I know complain about social media: in, ironically, social media. I like living in the Information Age, because today's tech helps me find nuggets of wisdom in the mountains of gibberish.

Folks can still get 'lost without a trace,' but many aircraft now 'talk' to satellites and ground stations: independently of the human pilots: giving technophobes something to fear, and searchers something to work with.

These "handshakes" give searchers more information about Malaysia Airlines flight MH370 than they'd have had in my 'good old days.'

That globe, from BBC News, shows several "handshakes." The last full handshake happened at 08:11. (0:11 GMT) An event recorded a few minutes later, at 8:19, may have been a partial handshake: a request from the aircraft to log on. That request may have happened while the airliner's communications system was rebooting.

Eventually, airlines and global traffic control systems may keep lines of communications open throughout a flight: giving an airliner's avionics a chance to ask for help, if something happens to the humans on board. And that's another topic.