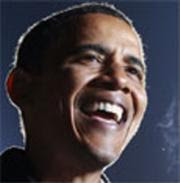 Remember Barack Obama the candidate? Cheerful, upbeat, promising hope for a new tomorrow and an end to partisan bickering?

That was then, this is now. Now we have Barack Obama the President-Elect. We know that he's going to be president of the United States of America, and so does he. 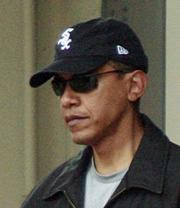 That photo on the right was taken after President-Elect Obama learned some of what's actually been going on. It's one thing to be a candidate, painting a vision of peace, prosperity, and siblinghood1. It's different, when you're the guy behind the desk.

The Obama Presidency: Change has come to America?

President-Elect Barack Obama is, quite wisely, setting up his White House staff now.

Remember how Candidate Obama promised an end to partisanship, an end to the wrangling in Washington? Looks like he's found his own way to get that job done.

President Obama's Chief of Staff will be Rahm Emanuel. "Rhambo" to people who follow Washington politics. Rahm Emanuel knows his way around Washington, and Washington knows him. He's Nothing intrinsically wrong with any of this: party politics is the way things have always gotten done in Washington. But: This is a change?!

Why would the "change" candidate a partisan whose nickname is "Rhambo? Simple: "...no one I know is better at getting things done than Rahm Emanuel," Obama explained. Makes sense, I guess.

Still, I'm with John Boehner, House Republican, who said that Emanuel was " 'an ironic choice for a president-elect who has promised to change Washington, make politics more civil, and govern from the centre.' "
(Times of India)

Isn't this blog about the War on Terror?

Yes. The thing is, America chooses its leaders by political means, American leaders make decisions based in part on politics, and other countries have their own politics.

Not discussing politics from time to time would make as much sense as trying to write about professional baseball without mentioning options, waivers, or contracts. It could be done: but you'd be missing a lot.

Naming a business-as-usual Washington partisan as White House Chief of Staff aside, President-Elect Obama has already brought change to the White House. He's: #1 is something Barack Obama has put in a long, hard, two years to achieve.

#2 was more President Ahmadinejad's doing, than Barack Obama's. Still, it's an historic first.

More, about President-Elect Barack Obama, ancestors, and Ahmadinejad, in "Barack Obama's Presidency: History Being Made" (November 6, 2008).