Today, Pakistani politics is making the last Minnesota Senatorial election look good. Here in the frozen north, we're still waiting for the courts to decide whose vote counts and whose doesn't.

Politics, Pakistani Style: Somebody Speaking Against You? Lock Him Up!

And, while you're at it, lock up some of his supporters.

In my youth, the more rabid right-wingers sometimes expressed the wish that anybody protesting the government should be locked up, or sent back where they came from. In Pakistan, that dream is close to reality.

Nawaz Sharif isn't an ally of the current boss of Pakistan. And, until quite recently, he was under house arrest.

I have no doubt that I'm missing quite a few of the subtleties of Pakistani politics and culture here, but the bottom line is that I realize that there are quite a few ways of running a country: but Pakistan's approach doesn't seem to be working very well. People who are satisfied with the way things are don't, as a rule, throw smoking tear gas canisters back at riot police.

Pakistan and the Open Mind

A little over 13 hours ago, an op-ed by Jason Burke started with these words: 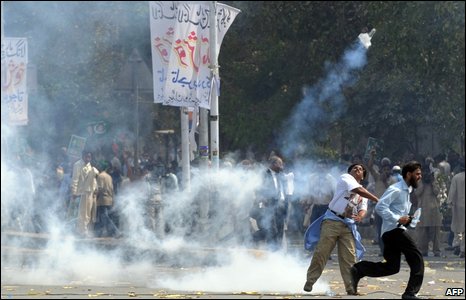 My guess is that Mr. Burke's op-ed got out before today's news from Lahore, Pakistan, filtered through. Or, that he didn't have time for any re-writes. 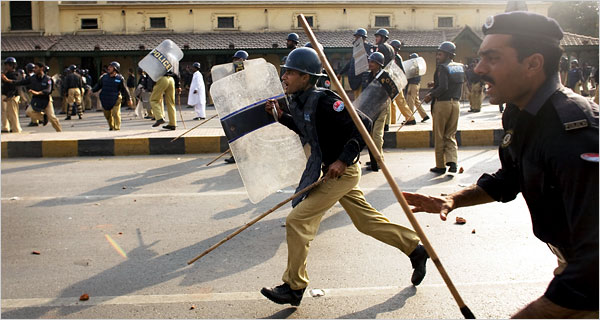 Mr. Burke isn't unceasingly praiseful toward Pakistan. He points out that "Some of the perpetual international hysteria is stoked by the Pakistanis themselves. Successive governments have perfected the art of negotiating by pointing a gun to their own heads...."

On the other hand, his article reminds me of the sort of daft multiculturalism I had to learn, back in the eighties.

My Ways, Your Ways, and Ways that Work

Jason Burke's op-ed was probably written with the British public in mind: It's a guardian.co.uk repost of something the Observer published. On the other hand, he does refer to "the west," so he probably also had America in mind, as well as the Brits and Europe.

My Way or the Highway?

These days, with information technology making terms like "global village" less of an oxymoron than it once was, it's important to remember that people are different: at individual, family, community, regional, and cultural levels. And, that not everybody either is, or should be, alike.

Readers of this blog live all over the world: About two thirds are in America, roughly five percent are in India. People with Internet connections in either the United Kingdom, Canada, or Australia make up about another 12 percent. Besides America, people in 140 countries, from Afghanistan to Zimbabwe, drop by from time to time.

The point is that these days, there's more to your world than the people in your area.

And, within limits, cultures that aren't your own should be respected.

But, one with some basis in fact.

I don't have any problem with a citizen of the United Kingdom having a decided preference for the British way of getting things done. People everywhere should think that their ways are 'best.' Which, if they're doing things right, they are: for them.

I'm an American. I think we've got a pretty good system of governing ourselves, doing business (I don't mean the the anachronistic nitwits at AIG, GM, Chrysler and Ford - think Bill Gates, Sam Walton, and Steve Jobs), and helping each other in hard times (I know: Bush refused to invade Louisiana - I'm thinking of truckers and contractors who sent supplies into post-hurricane Florida and Louisiana).

The "American way" works pretty well. For Americans. That's not just my opinion: quite a number of people vote with their feet, moving to America from all over the world.

But, it's not the only way of running a country.


Truth, Justice, and the [your region] Way

I think humanity would lose a great deal if cultural distinctions disappeared. And, closer to the topic of this blog, I am not at all convinced that "democracy" as imagined by Americans is the one, true, and correct, form of government for all people and all time.

I do think that a responsive, responsible, government is needed everywhere, but details like whether the leaders are selected by elections, civil service exams, or heredity, are just that: details. What's important is that "the government do the right thing by the governed." (A Catholic Citizen in America (March 14, 2009))

I implied, in another blog, that I don't expect everybody to be exactly like me. I think it's great that the entire world isn't like Georgia, or Minnesota, or New York City, or San Francisco, or Bemidji.

Accepting Diversity and Locking Up People Who Don't Agree With You

I hope that Mr. Burke is right, and that Pakistan's abdication of authority in the Swat Valley, harboring (willingly or not) of LeT terrorists, and habit of locking up people who don't agree with whoever says he's president at the moment, aren't indications that the territory we call Pakistan is going to join the list of areas that need to be cleaned up.

I think that reading Mr. Burke's op-ed is a good idea. He seems to have some knowledge of Pakistan and how it works. However, I also think that it's well to realize that 'non-Western' isn't necessarily 'good' or 'functional.' And, that 'Western' isn't 'bad' or 'oppressive.' And, no: Mr. Burke doesn't use the term "oppressive."

The first person to comment on Mr. Burke's column, Zarak, did:

"One sees the thoughts and influences of Imran Khan in this article, who now a days is carrying himself as one of the authorities on the current Pakistan's Islamic phenomenon. The fact is that Pakistan is a complete mess with a powerful Punjab that is trying to run the state in an imperial manner and using fundamentalism/militant Islam to control peripheral nationalism of Pashtuns and grabbing territory in the west (Afghanistan) and the east (Kashmir)...

"...The author's knowledge of Pakistan nationalism is also superficial. There is no strong feelings of nationhood in the citzens of Pakistan. They are either Punjabis, Sindhis, Baluchis, Pashtuns, Siraikis, etc...."

Zarak may be biased about the "the oppressive rule of Punjab's military elite" - but I'm afraid that he may have a point, about the Pakistani-on-the-street's attitude toward Pakistan as a nation.

The idealism of Mr. Burke is admirable. However, I think it's prudent to consider that locking up the leader of an opposition party, together with some of his supporters - and leaving enough supports running around loose to start at least one riot - may not be the mark of a well-functioning government. No matter how non-Western it is.