Rachael Ray and Yasser Arafat? GET A GRIP!

I realize that it is a challenge to come up with a new column on schedule, but I would have hoped that Michelle Malkin, or anyone else who gets paid to crank out words, would take a deep breath, think, and maybe use common sense and a search engine before turning in a column.

This week's prize piece of runaway cluelessness may be Michelle Malkin's identification of a scarf worn by Rachael Ray in a Dunkin Donuts commercial as a symbol of terrorism.

"Rachael Ray ad pulled as pundit sees terror link"
MSNBC (May. 28, 2008) Funny. I thought that Michelle Malkin was a columnist who appeared on Fox News: Now I see that MSNBC identifies her as a "Fox news commentator."

Michelle Malkin's column doesn't appear on the FoxNEWS.com website, but the FoxNews.com website does include an Associated Press article about the mess ("Dunkin' Donuts Pulls Rachael Ray Ad Over 'Terror' Symbolism" FoxNEWS (May 28, 2008)).

The column that started this exercise in nonsense, and has cost Dunkin Donuts a great deal, is "Of donuts and dumb celebrities" Michelle Malkin (May 23, 2008)) I'll admit that "hate couture" is a moderately well-turned phrase. Other than that, the Malkin column seems to be clueless blather.

It would be different, if the scarf that Rachael Ray wore bore a serious resemblance to the kaffiyeh worn by the late Yasser Arafat.

It doesn't. Not to my eyes, anyway. Sure, both are black and white, and have a generally rectilinear pattern. But that's as far as the resemblance goes. Even the ratio of black to white is visibly different.

MSNBC doesn't come out much better. That quote ("popularized by Yasser Arafat and a regular adornment of Muslim terrorsts appearing in beheading and hostage-taking videos") that presumably came from Malkin's column does not appear in the column. Granted, it might have been edited out later - but a blatant bit of clumsy cover-up like that would have been a bigger story than the original.

The closest to MSNBC's purported quote is in a comment to the column: "Look, the kaffiyeh has a *direct* association with Palestinian violent action against Jews and Westerners that goes back at least 40 years. Yassir Arafat himself popularized the use of the keffiyeh in direct conjunction with his terror campaigns. Many, many, many innocent people have been brutally murdered under that black and white emblem"

Keffiyeh: a Symbol of Terrorism?

Doing a little checking for this post, I think I can see why Michelle Malkin might have blundered. "Where Some See Fashion, Others See Politics" (The New York Times (February 11, 2007)) describes how the kaffiyeh had become a fashion statement in some circles. I'm no expert, but I think the Times writer goofed, describing Arafat's 'chainlink' pattern as being the standard in the Arab world. I've seen many variations, in news footage.

Seeing pictures of Yasser Arafat in a kaffiyeh, and seeing knockoffs on fashion-conscious westerners, thinking that any black-and-white tasseled cloth is an Arafat kaffiyeh almost makes sense.

Almost, but not quite.

First, and most important, there isn't all that much resemblance between what Rachael Ray wore, and the sort of kaffiyeh worn by Yasser Arafat.

Second, I don't see much evidence that kaffiyehs (I know: that's probably not the correct plural form) are unique to terrorists. Identifying a presumed kaffiyeh as symbolic of terrorism is not merely ignorant: it is a feat of ignorance on a heroic scale.

I had assumed, from what I saw on news and documentary footage from the Middle East, that patterns on a kaffiyeh indicated membership in a kinship group. That assumption is based in large part on the habit some of my ancestors had, of wearing tartans which identified their clan.

I've been able to find nothing about the significance of the kaffiyeh patterns, but have found sources which show that the 'Arafat pattern' isn't the only one in use.

Finally: a look at Rachael Ray's scarf, the kaffiyeh on Arafat's head, and others:

(from MSNBC, used w/o permission
Screen shot of the Rachael Ray ad, with the 'terrorist' scarf.

(from CBC Yasser Arafat obituary, used w/o permission)
Pictures of Yasser Arafat, at about the same scale as the Rachael Ray picture, and one showing more detail of his kiffiyeh.

(from Dolls Clothes, used w/o permission) 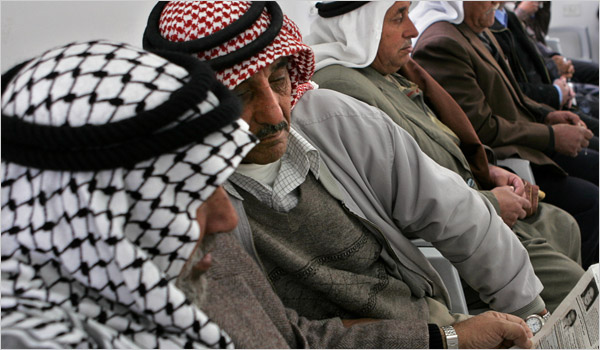 (From The New York Times, used w/o permission)

(From Corbis, used w/o permission)