"RIP NEDA, The World cries seeing your last breath ... We remember you."

The word "calm" is in quite a few headlines, telling what it's like in Iran today. I'm not surprised. Put a few thousand riot police and Basij militia on Tehran's streets, and it would be surprising if thing's weren't "calm." Or quiet, at least.

The Ayatollahs' enforcers have impressed Iranians a great deal. And, provided them with a martyr and rallying cry.

" 'RIP NEDA, The World cries seeing your last breath, you didn't die in vain. We remember you.' 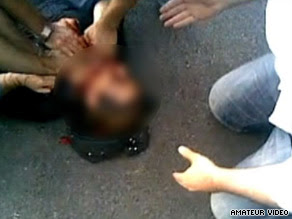 (from CNN, used w/o permission)
"People tend to a woman called Neda as she lies on the street."

"That post on Twitter came from a man who identified himself as an American guitarist in Nashville, Tennessee.

"Amid the hundreds of images and videos of Saturday's brutal crackdown on protesters in Iran that flooded the Internet, it was the graphic video showing the death of a young woman that touched a nerve among those following the events in Tehran for more than a week...." (CNN)

I'm with a BBC op-ed writer. I think that Iran's Ayatollahs have taken a page from the late Shah of Iran's playbook. In a tense situation, they're ignoring the Iranian people (BBC)

Shah Reza Pahlavi survived, but he had to leave Iran. Ayatollah Khomeini returned, became Iran's first Supreme Leader, and Iranians have been experiencing life as subjects of an Islamic republic ever since.

From the looks of it, many of them are fed up.

Also from the looks of it, the Supreme Leader isn't listening.

Not all of Iran's rulers are quite on the same page.

"...The country's foreign minister disputed allegations of ballot irregularities in Iran's disputed presidential election, and the parliamentary speaker implied the nation's election authorities had sided with one candidate...." (CNN)

With my background and biases, I suspect that the parliamentary speaker realizes what's going on, knows a little Iranian history, and would like to be around a year from now.

Not that siding with people like Neda is particularly safe. The daughter of one of Mir-Hossein Mousavi's, Hashemi Rafsanjani, and three of Rafsanjani's relatives, have been arrested. (Update June 21, 2009: "All but Faezeh Rafsanjani, the former president's daughter, were later released, Press TV said. The woman's brother said she was arrested while taking part in a protest." (CNN) CNN's Twitter account (cnnbrk) posted "Iranian media: Rafsanjani's daughter, Faezeh Hashimi, released after being arrested for participating in illegal rally. #iranelection" - but I haven't found that on CNN's website yet.)

From my point of view, it seems likely that the Ayatollahs' enforcers are quite effective at killing women and shoving 14-year-old girls around. (June 15, 2009)

With a Supreme Leader who has forgotten what gave his predecessor control of Iran, and a broad swath of the Iranian population thoroughly fed up with the fruits of the 1979 revolution, that may not be enough to maintain the status quo.

The same old story all over again. World domination, power, money etc. When is the human race going to learn from the mistakes of the past?

As an apolitical man, I felt remorse by the situation in Iran. As a person who went through the communist system, when the totalitarian regime loses ground, they blame external factors. The USA is always the resident culprit followed by Britain then as situations warrant, Germany, France etc. I happen to understand 2 or 3 European languages. Neda in an Eastern European language means "Don't give up". Who knows? Maybe Neda's death is the beginning of a brighter future for Iranians. NEDA, Your death is not in vain. The whole world is mourning you. May your dear soul rest in peace. Freedom for your people.

I feel so bad with this murder. But where was the media when a born American Rachel Crow was smashed under an Israeli bulldozer while she was showing her support for the poor Paelistine people. Do we American know this fact that Isarel dared to kill our daughter -not an Iranian?

Too bad this teen was running around trying to convince her fellow liberal Iranians to mess with Police, burn things, break things, etc, etc. Yeh, boy an I crying boohoo!! Here's a joke: what do you call a protester who has part of their rib cage blown out by a high powered rifle?? A dead protester! Bunch of Iranan knuckleheads who are sore losers over the results of an election. Just like the liberal bile phags here in US BooHoo! BooHoo!!Time for a beer, later whiners

I see a lot of Iranians here in US complaining about their latest election results, saying its inhumane what the Iraninian Police are doing. These Police are trying to keep order over the public. The protesters need to go home and realize their vote lost. These are dedicated Iranian Police doing the right thing. I think we should round up all these candle holding iran indian crybabies here in the US and ship them back to their home land and let them cry there in the streets, and oh yeh, they could get shot at like a turkey shoot, man I just love watching crybabies lose!!!!!! What comes around goes around

"Here's a joke: what do you call a protester who has part of their rib cage blown out by a high powered rifle?? A dead protester!"

I think you need to burn in hell as soon as possible!

Changes in my schedule demand that I get out of the habit of replying to most individual comments.

Anonymous #1, 2, and 3 - the standard-issue antisemitism, and rage at people who try to make a difference help make that a relatively easy decision.

One visitor's response to an earlier comment prompted me to link to another blog.

That response read, in part: "I think you need to burn in hell as soon as possible!"

I think I understand the emotions involved, but judging others in that way isn't recommended in my system of beliefs. I'm a practicing Catholic, and briefly discussed the matter of judging acts and judging people, in "I'm Not Allowed to Judge Pardo" in "Psycho Santa's Slaying Spree - The Catholic Connection" (December 26, 2008).