'All protest against the enlightened policies of our beneficent government's institutions are henceforward to be regarded as acts of terrorism.'

That couldn't happen in America, right?

Pentagon Equates Protest With Terrorism: I am Not Making This Up

A few - 1,546 - of the American Defense Department's 3,000,000 or so employees took an anti-terrorism training exam that included this question:

"Which of the following is an example of low-level terrorism? The 'correct' answer, as the exam was written, was "Protests." (FOXNews)

So Much Depends on What's Meant by "Protest"

Somebody sent a copy of the question - and the officially 'correct' answer - to the ACLU. The ACLU wants the question removed from the exam: and I can see their point.

Lieutenant Colonel Les Melnyk, speaking for the Pentagon today, said that they weren't releasing the name of the employee who sent the question - and: " 'Sharing that with the ACLU wouldn't be any sort of misconduct," which doesn't surprise me as much as it might some. The American armed forces have a long, if unappreciated, habit of reviewing what's been done, identifying mistakes, and correcting them. (June 30, 2008)

He didn't defend the test question, either: " 'They should have made it clearer there's a clear difference between illegal violent demonstrations and peaceful, constitutionally protected protests,' " which makes sense.

I was in one of the "peaceful, constitutionally protected protests" in the early seventies, adding my presence to a protest against American policies in Vietnam.1 The people I marched with were no more a threat to the American government or way of life than delegates to a dentists' convention. We had a very definite point of view, and wanted to make it clear that we were serious in our stand.

People like the late Timothy McVeigh also don't approve of America's policies. But, in his case, the "protest" took the form of a massive explosion which destroyed the Murrah federal building, and killed a great many people. That could be viewed as a protest, but it can also reasonably be viewed as an act of terrorism.

Less destructive acts, like throwing a brick through the window of a courthouse, could also be viewed as "low-level terrorism." Particularly if someone was standing near the window.

But: "protest" being a form of "low-level terrorism"?!

Lieutenant Colonel Melnyk gave some insight into how this world-class SNAFU might have started:

"...many Defense employees work in countries where violent demonstrations are regular occurrences.

" 'In those situations, that anti-Americanism might be taken out on an American in the crowd,' Melnyk said." (FOXNews)

America's Department of Defense operates in many places besides the shores of the Potomac River. Anti-Americanism is very real, and can be expressed in violent ways.

Starting with those facts, and assuming that an overworked government employee with none-too-well-developed language skills wrote the test, based on sketchy instructions, I can see how that 'protest equals low-level terrorism' question might happen.

It's being dealt with, too, apparently:

"...Of the Defense Department's 3 million employees, 1,546 took the exam, Melnyk said. All will be sent e-mails 'explaining the error and the distinction between lawful protests and unlawful violent protests,' he wrote in an e-mail...." (FOXNews)

Disagreeing With the Government Isn't a Crime

I can also see why two people reacted the way they did:

"...George Martin, national co-chairman of United for Peace and Justice, an anti-war group, said he was satisfied with the decision to remove the question.

"' There is a distinction between legal, non-violent action and violent demonstrations. That’s where the mainstream peace movement comes from,' Martin said.

" 'I'm glad to see that question was removed. How the government directs its employees to deal with its citizens is critical.'

"Ann Brick, an attorney with the ACLU, said 'I'd like to talk to them about what steps they're going to take to make sure mistakes like this don’t happen in the future.

"Earlier this week, Brick called the question 'part of a pattern of equating dissent and protest with terrorism.'..." (FOXNews)

I'm no peacenik. And, I have a respect for the American armed forces which comes from some personal experience, and much more study of what the real armed forces are like: not the Berkeley/Amherst version.

On the other hand, I know that the American military is made up almost exclusively of human beings.2, and that humans have shown an enormous capacity for making outrageously stupid mistakes.

I hope this "protest is low-level terrorism" question is the result of a monumentally stupid mistake.

On the other hand, it may represent a disturbing attitude.

'Everyone I Disagree With is a Terrorist' - Third Time This Year

I hope, sincerely, that each of those outrageous opinions was the result of some combination of ignorance, lack of preparation, and a failure to understand that not everyone in America has exactly the same views - and that this is okay.

I was born during the Truman administration, and saw part of the mess left by America's McCarthy era. I was on an American campus in the eighties, when political correctness was flourishing. I have seen what an ideologically-driven effort to enforce one set of views while ostracizing and suppressing those with 'incorrect' views can do to individuals and a society.

America has enough problems already: We don't need people in authority identifying those who disagree with them as "terrorists," low-level or not.

Related posts: In the news: 1 Me? Protest?? In a peace march??! Didn't I say that I'm a patriot, earlier this year?

I think there's some confusion in America over what "patriot" and "patriotism" mean. For some, Frank Burns of "M*A*S**H" and Archie Bunker of "All in the Family" are patriots: ignorant, stupid, hopelessly mired in Hollywood's notion of the conservative world view.

By that standard, I am not a "patriot."

However, my views are, in some key areas, very close to the politically and socially conservative position in American culture. So, if "conservative" is defined as anyone who is neither liberal or 'moderate,' than I am conservative.

So why was I in a peace march?

I wasn't. The march was a protest against American policy in Vietnam. If it had been a march in support of the idea that peace at any cost should be American policy, I would not have participated. I admire people who conscientiously and seriously follow a pacifist philosophy, and think that they will flourish as long as there are non-pacifists to protect them.

At the time, it seemed to me that whoever was running the show in Washington had no intention of winning the Vietnam War, Indochina involvement, or whatever it was supposed to be called.

Or, if they did want to win, they hadn't a clue how to do so.

That, in my opinion, was stupid.

And so, I joined that march.

My views, some four decades ago, might have been summed up in an art project I'd done in high school. It was a large peace symbol, with the words, "DROP IT" underneath. Looking closely at the symbol, the viewer would notice, on the diagonal, four engine nacelles.

More, about my views, in A Catholic Citizen in America: 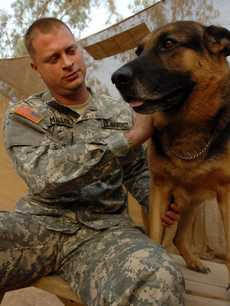