Quite a few people feel uncomfortable when they meet someone who looks different, or speaks with an accent. It's even worse when the outsider enjoys unfamiliar pastimes: and when the other person's beliefs are different, that uncomfortable feeling can turn to something else.

Many Americans associated "terrorism" and "Islam." That's understandable, since Islamic terrorists killed about 3,000 New Yorkers in September of 2001. But not all terrorists are Muslims.

And, not all terror targets are in America.

British law enforcement started out handling a domestic disturbance, and by the time they were through a suburban street was blocked off and a hazmat crew was dealing with what they thought was ricin.

Ricin is a particularly poisonous substance: hence the excitement.

But, not to worry. Following, perhaps, the tradition established by Chamberlain:

"...Authorities expected testing to determine on Friday whether the material they found in the house was ricin, Burroughs said. Agents had ruled out any connection to terrorism, she said...." (CNN)

"A father and son are being questioned by anti-terrorism officers following the discovery of the poison ricin at a house in County Durham.

"The find is connected to a police inquiry into alleged extreme right-wing activity...." (BBC)

"...Nicky was initially arrested at his home in Grampian Court, Annfield Plain, on suspicion of inciting racial hatred but now both father and son are being detained under the Terrorism Act 2000.

"Durham's assistant chief constable Mike Barton said: 'This shows that the terrorist threat in the UK is real and present.

" 'We believe the people involved to be white supremacist extremists and one of our lines of inquiry was that they were going to target people from ethnic minorities.

From "...ruled out any connection to terrorism..." to "...could be part of worldwide terror plot targeting ethnic minorities..." in about 24 hours is quick work. Those are different people, and different publications, of course.

I think it's quite possible that the substance that U.K. law enforcement found is ricin. The BBC says that test results on the stuff found in a jam jar aren't back yet: and that the rest of the house won't be searched until the authorities know what they're dealing with.

My favorite quote of the lot was what Chief Constable Mike Barton said: " 'White supremacists seem to hate an awful lot of people.' " It struck me as a rather good example of the British understatement we used to hear about.

White Supremacists Aren't the Only Ones

Chief Constable Barton was, I think, on to something. White supremacists do hate "an awful lot of people." So, it would seem, do people who use their version of Islam as a reason for strapping suicide vests on their kids, and sending them off to kill Jews and other enemies.

It doesn't, I think, stop there.

A group in Sri Lanka has, for some time, been acting toward people who aren't like them in a way that I'd scarcely call 'loving.' I understand that the leader of the group was killed recently, and that the Sri Lankan government may have some explaining to do. (UPI) As I've written before, things aren't simple.

America has its white supremacists, too. And, some of them have been terrorists: the late Timothy McVeigh is possibly the best known. Mr. McVeigh and the others who blew up Oklahoma City's Alfred P. Murrah Federal Building demonstrated their right to that label.

So, I think, do people at another end of the political spectra, like ELF, in whose hearts burns an environmental zeal that's as hot as the fires they set from time to time.

I don't think that all liberals are terrorists. I've spent quite a lot of my life on college campuses, and eighteen months in San Francisco. I've gotten to know quite a few liberals along the way: and learned that they are, by and large, willing to obey laws and unwilling to set fire to other people's houses.

The point is, I have first-hand knowledge of American liberals. I also have a habit of doing research when I discover a gap in my knowledge.

Those Hate-Filled [fill in the blank] Over There

As I wrote earlier: "Quite a few people feel uncomfortable when they meet someone who looks different, or speaks with an accent."

In America, I think many people assume that the "quite a few people" are those rednecks over there: or perhaps the natives of inner Pennsylvania. One presidential candidate tried, I think with good intentions, to explain the strange ways of inner Pennsylvania to a group of civilized people in the recent presidential election. Candidate Obama got a little bad publicity over his 'Pennsylvania' remarks: but he got elected anyway. And, as I said, I think his effort was well-intentioned.

On the other hand, I think that quite a few of the 'better sort' in America feel that all people who live in a rural area and/or is to the right of center, politically, are: Yes: that's an over-simplification. But not, I think, by much.

I'll admit that 'those people over there' are a scary bunch.

Their ways are strange: if you've spent most of your life in the larger urban centers of America, or have been careful regarding the sort of people you associate with.

The ways of 'those people' are strange. They may never have seen the inside of a Starbucks, many of them have gun racks on the back of their pickup's cab, and many like NASCAR - which is big, noisy, and uses petroleum products.

And, yes: a few people who don't support Greenpeace, the Sierra Club, and the DFL, are dangerous nut jobs. But there are significantly fewer of them, now that McVeigh has been executed.

Most of us are quite safe to have around: gun racks, hound dogs, and all.

I'm 'One of Those People' - Almost

I'm not particularly afraid of people who follow the strange ways of rural America. That's partly because I'm one of them: almost. I grew up in a college town in the Midwest, which was a Standard Metropolitan Statistical Area by 1960. Even then, agribusiness was an important enough component of the local economy to ensure that I saw farm implements more often than your typical kid from the Bronx.

Just as I've gotten to know quite a few liberals, I've rubbed elbows with quite a few people who certainly aren't left-leaning in their politics.

And, as with the liberals, most of the 'right-wing' people generally obey the law. Although I'll admit that several are a bit iffy when it comes to sticking to the low side of the speed limit.

I don't expect people whose spiritual home is downtown San Francisco, or south Manhattan, or Washington, D.C., to want to live the way I do. It would be nice, though, if people in responsible positions would extend the inclusiveness they often insist on, when dealing with non-Western cultures, to the residents of inner North America.

Our ways are not quite the same as theirs: but we're not the enemy. 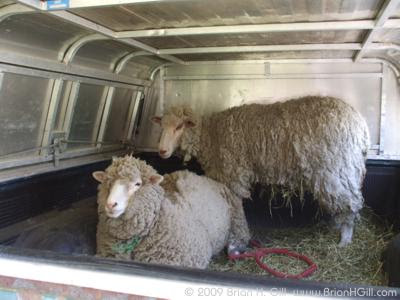 (One of my brothers-in-law stopped by this week: with these sheep. Long story.)

Vaguely related posts: In the news: