Saudi women's eyes are too sexy, so they should wear a niqab: a veil that that only lets one eye look out.

The problem, it seems, is that if women are allowed to use both eyes, they'll be tempted to use makeup.

This bit of Islamic wisdom came from "Sheikh Habadan, an ultra-conservative cleric who is said to have wide influence among religious Saudis, was answering questions on the Muslim satellite channel al-Majd. " (BBC)

A Crackpot With a Thing About Eyes, Makeup, And/Or Women - So What?

One response would be to say that he's not a crackpot, he's a highly respected Islamic leader. The problem is, I've gotten the impression that these aren't mutually contradictory conditions.

Sheikh Habadan, the Muslims in Tayside who recognized a puppy as an insult to Islam, and Sudan's courts have done very little to make Islam seem like a belief system that belongs in the Information Age. As I wrote earlier this year, "...Muslims who decide that dog drool, and the dogs that make it, are "unclean" reminds me very strongly of members of those Protestant sects who are convinced that accordions, alcohol and/or tobacco, slacks on women, and wine glasses are the work of the devil.

"The difference is that, these days at least, members of outfits with names like 'First Church of the Hallelujah Few' aren't taken very seriously. Muslims who are offended by puppies are....

"...What concerns me is the way so many Muslims react to images and events: 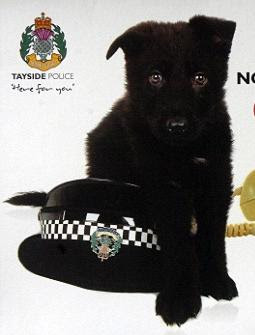 (from Mail, used w/o permission)
"Unclean! Unclean!
"How Dare You Offend Us This Way!" 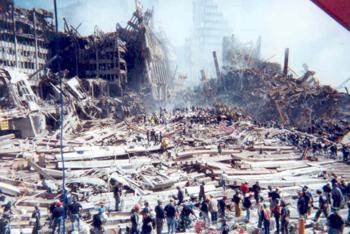 "...I'd like to believe that Islam can exist in today's world. But Islamic reaction to that cute puppy make me wonder."

I think part of the problem is that Islam has no formal, central, authority. It's very 'democratic,' in that when Islam came to different cultures, the local imams decided what they thought the teachings meant, merged that with local customs and beliefs, and called the result "Islam."

It's a bit like the more colorful parts of Protestant Christianity, where a clique can convince themselves that they, and they alone, recognize the demonic threat of Mr. Ed, or whatever it is that they don't like, or fear.

In the News: Selected posts on Islam, beliefs, culture, and over-the-top Saudi clerics: Related posts, on Islam, Christianity, Religion, Culture and the War on Terror.

And you dogs are proud of what you do to yours!

Somewhere in America, a woman is raped every 2 minutes, according to the U.S. Department of Justice.

In 1995, 354,670 women were the victims of a rape or sexual assault. (NationalCrime Victimization Survey. Bureau of Justice Statistics, U.S. Department of Justice, 1996.)

Over the last two years, more than 787,000 women were the victim of a rape or sexual assault. (National Crime Victimization Survey. Bureau of Justice Statistics, U.S.Department of Justice, 1996.)

The FBI estimates that 72 of every 100,000 females in the United States wereraped last year. (Federal Bureau of Investigation, Uniform Crime Statistics, 1996.)

One of the most startling aspects of sex crimes is how many go unreported. The most common reasons given by women for not reporting these crimes are the belief that it is a private or personal matter and the fear of reprisal from the assailant.

Approximately 28% of victims are raped by husbands or boyfriends, 35% by acquaintances, and 5% by other relatives. (Violence against Women, Bureau of Justice Statistics, U.S. Dept. of Justice, 1994)

The FBI estimates that only 37% of all rapes are reported to the police. U.S. Justice Department statistics are even lower, with only 26% of all rapes or attempted rapes being reported to law enforcement officials.

In 1994-1995, only 251,560 rapes and sexual assaults were reported to law enforcement officials -- less than one in every three. (National Crime Victimization Survey, Bureau of Justice Statistics, U.S. Department of Justice, 1996.)

An overwhelming majority of rape service agencies believe that public education about rape, and expanded counseling and advocacy services for rape victims, would be effective in increasing the willingness of victims to report rapes to the police. (Rape in America, 1992, National Victim Center with Crime Victims Research and Treatment Center.)

According to the U.S. Department of Justice: (All statistics are taken from: Violenceagainst Women, Bureau of Justice Statistics, U.S. Dept. of Justice, 1994.)

One of every four rapes take place in a public area or in a parking garage.

31% of female victims reported that the offender was a stranger.

At least 45% of rapists were under the influence of alcohol or drugs.

In 29% of rapes, the offender used a weapon.

In 47% of rapes, the victim sustained injuries other than rape injuries.

75% of female rape victims require medical care after the attack.

NOT JUST A FAMILY MATTER :

Family violence and abuse are among the most prevalent forms of interpersonal violence against women and young children -- both boys and girls. The sexual abuse of a child should never be "just a family matter," but many children are afraid to report an incident to the police because the abusers are too often a family friend or relative.

About half of all rape victims are in the lowest third of income distribution; half are in the upper two-thirds. (Violence against Women, Bureau of Justice Statistics, U.S. Dept. of Justice, 1994.)

There were 71 forcible rapes per 100,000 females reported to United States law enforcement agencies in 1996. 2

Data from the National Women's Study, a longitudinal telephone survey of a national household probability sample of women at least 18 years of age, show 683,000 women forcibly raped each year and that 84% of rape victims did not report the offense to the police.3

Using Uniform Crime Report data for 1994 and 1995, the Bureau of Justice Statistics found that of rape victims who reported the offense to law enforcement, about 40% were under the age of 18, and 15% were younger than 12.4

The National Crime Victimization Survey indicates that for 1992-1993, 92% of rapes were committed by known assailants.1 About half of all rapes and sexual assaults against women are committed by friends and acquaintances, and 26% are by intimate partners.1

Non-forceful verbal resistance and lack of resistance are associated with rape completion.1,6

The adult pregnancy rate associated with rape is estimated to be 4.7%. This information, in conjunction with estimates based on the U.S. Census, suggest that there may be 32,101 annual rape-related pregnancies among American women over the age of 18.17

Non-genital physical injuries occur in approximately 40% of completed rape cases.18 As many as 3% of all rape cases have non-genital injuries requiring overnight hospitalization.19

Estimates of the occurrence of sexually transmitted diseases resulting from rape range from 3.6% to 30%.18,22 HIV transmission risk rate from rape is estimated at 1 in 500,22,25 although a few probable cases have been documented in Sweden and Great Britain. 26,27

Fatalities occur in about 0.1% of all rape cases.29,30 A study examining the use of health services over a five year period by female members of a health maintenance program found that the number of visits to physicians by rape victims increased 56% in the year following the crime, compared to a 2% utilization increase by non-victims.31

The National Public Services Research Institute estimates the lifetime cost for each rape with physical injuries which occurred in 1987 to be $60,000.32

(You certainly have been busy: all these comments!)