Sarah Palin's a Nazi: I Saw it on Television

I know: it's just a cartoon.

Sunday night's "Family Guy" episode included a scene where Brian (a talking dog, and arguably the only sane character on the show, apart from Lois) is in Poland while the the Nazis are invading.

He looks at a Nazi uniform and sees a McCain Palin campaign button. 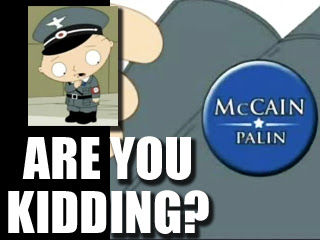 (From FOXNews, used without permission)

You'll have to look for the video on FOX. YouTube postings of an excerpt from last night's show aren't there any more. "This video is no longer available due to a copyright claim by FOX" is what YouTube says.

I sometimes feel that there should be signs like that around poling places this election. With a 'radical Muslim' and a 'Nazi' on the ticket, it's been raining nuts under the tree of liberty ("Monkey Pirates, Jews, and Zionists? Get a Grip!" (October 14, 2008)).

For the Americans who read this blog

However you vote this election, I hope you think about your choice. There's nothing wrong with feelings: I have them all the time. But they're lousy for making decisions. Decisions more important than, say, 'I'll read Garfield instead of Zits,' that is. (I read both, by the way.)

There's plenty of facts and stated positions to make an informed decision in the presidential election. One candidate threatens to continue the policies which are marginalizing Al Qaeda in Iraq, the other wants to "spread the wealth around," and both assure the electorate that they have the best interests of America at heart.

There's more to each candidate, and the party positions, of course.

But please, vote because of something that exists in the real world: not because somebody said Barack Obama is a radical Muslin, or that McCain is a Nazi.

In a way, I'm relieved to see that, so far, nobody seems to have realized that YouTube's acknowledgment of intellectual property rights could be packaged as part of the vast right wing conspiracy's attempt to cover up The Truth.