The terrorism business just isn't what it used to be.

A series of bombs go off, with the usual results: Back in the day, at least in the Middle East, terrorist groups and wannabes would be lining up to say 'we did it!'

These bombs went off today, and they killed people in India. The Assam state: Kamrup, Kokrajhar, Barpeta and Bongaigaon districts, to be more exact. 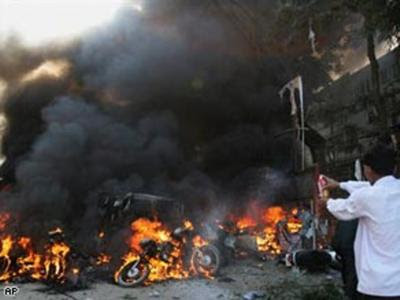 (From Associated Press, via CNN, used without permission)
That man, we're told, is trying to put out the fire. With a spritz can, apparently. Well, you use what you've got.

The state authorities seem to think that the United Liberation Front of Asom (ULFA) did it. They're a bunch who want to have their own little territory in India. I gather that it's as if a bunch of guys in Thorpe Township here in Minnesota decided that Hubbard County should be an independent country, named Thorpia, with Park Rapids as its capital.

ULFA says they didn't do it. Neither does anyone else.

From one (warped, sick) point of view, it's a sad day for terrorists, when they can't claim credit for their own work. 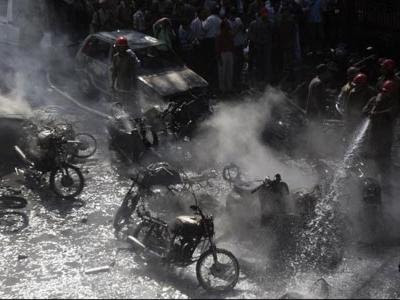 (Detail of a photo from Associated Press, via CNN, used without permission)
What a Mess. That weird-looking motorcycle was probably a rickshaw,1 before terrorists made one of their usual statements.

ULFA doesn't want much: just "an independent socialist sovereign Assam." This bunch of visionary revolutionaries apparently represents "not only the Assamese nation but also the entire independent minded struggling peoples, irrespective of different race-tribe-caste-religion and nationality of Assam." (GlobalSecurity.org")

Or, it may have been some hotheaded Bodos. Some people in the Bodo tribe haven't appreciated 'those foreigners' moving in. It this case, its Bangladeshi, who are mostly Muslim.

Remember: Not All Terrorists are Muslims

Come to think of it, today's bombing might be "Islamic terrorism," after all.

Or, it might be something else. Even if Muslims are involved, the motives may not be religious. Using that hypothetical "Thorpia" situation as an example, a struggle over fishing rights in Minnesota's 1st through 11th Crow Wing Lakes might not be religious, even if one side was mostly Lutheran.

I've said that before, but I think it bears repeating.

The part about 'not all terrorists are Muslims:' not the Thorpia and Lutherans bit.

In the news: 1 Rickshaw. Don't laugh. Looks like the motorized kind are still in use. About two years ago, Richshaws were banned in at least parts of India. Human-pulled ones, anyway.

This high-minded move was intended to end an inhumane and demeaning job. It also put a lot of rickshaw pullers out of business. Not to worry, though, they were going to be "rehabilitated." ("Rickshaws, ban highlight India's contradictions" (Chicago Tribune (October 18, 2008))

My opinion about this widely-acclaimed bit of hoity toity humanity is in "Rickshaw Ban: It Seemed Like Such a Nice Idea" (Starting a Small Business Without Losing My Mind (October 30, 2008)).