I don't blame the Fars news agency for getting it wrong. I get the impression that people who follow the party line in Iran believe that the Great Satan America is constantly attacking the Islamic Republic of Iran, and constantly being thwarted by the Lions of Islam.

So, when the Fars news agency heard that Iran had forced down a foreign aircraft in Iranian airspace, it was probably only natural to assume that it was an American military aircraft. Or, whoever told Fars may have believed that it was.

Aircraft, yes; American, no; military, no.

Fars is a semi-official news agency in Iran. It didn't take long for the state television channel, Al Alam, to announce that the plane "was not a military plane and did not belong to the United States." At least, that's what The New York Times wrote.

It sounds like the plane was forced down Sunday and allowed to go on to Afghanistan yesterday.

Apparently, Fars gave a fairly detailed account of the encounter. " 'The U.S. jet was flying at low altitude in a bid to remain unnoticed by Iranian radars, but it was made to touch down at an Iranian airport escorted by Air Force fighter jets,' " the Fars report said.

"It said the crew and passengers, identified as five members of the military and three civilians, were released 'after daylong interrogations revealed that they had violated Iranian airspace unintentionally as they were en route to Afghanistan.' " (The New York Times)

My guess is that the "Falcon" that Fars thought they had was a HU-25 Falcon Jet, made by Dassault-Breguet of France. Getting five military people into the jet would be no problem. The Falcon is around 55 feet long, and carries a crew of five, including the two pilots.

Just to make things more interesting, Dessault also makes a line of Falcon business jets, including a Falcon 20 - the civilian version of the HU-25 Falcon.

I'd say there's room for three civilians in an HU-25, on top of the crew: provided they didn't carry much equipment.

However many people were on the plane, Iran, America, and Multi-National Forces-Iraq are all on the same page now. It looks like it was a Hungarian business jet, making an unscheduled, unplanned, and probably very much unwanted layover in the Islamic Republic. 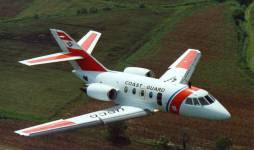 Or, maybe that's just what They want us to believe. (I've written about conspiracy theories before: and, no, I don't think this Falcon incident was some sort of Zionist conspiracy, and color television wasn't a commie plot.)

If this business with the Falcon jet sounds familiar, it should. Something like this happened in July of this year. I'm sure glad I don't have to do business in that area.

Meanwhile, in the Strait of Hormuz, the Revolutionary Guard keeps bumping into American warships: metaphorically speaking, that is.

It's not at all hard to suspect that Iran is hoping to provoke some sort of violent incident. But, I could be wrong.