Joe Wurzelbacher, now known around the world as "Joe the Plumber," was some plumber in Ohio who wanted to buy the business he'd worked for. He's saved, and he could do it.

Unless Barack Obama follows through on his promise to tax the "rich."

I keep saying that Another War on Terror isn't political, so I've got to draw the line somewhere. I've got more to say about Mr. Obama and his plan to "spread the wealth around," that's beyond the scope of this blog.

Which is why I posted my views in " Joe the Plumber' Wurzelbacher: American Taxpayer, Entrepreneur, and Voice of Reason in 2008 Election" (Starting a Small Business Without Losing My Mind (October 16, 2008)).

In case you missed it, a BBC profile includes a 1:55 video of Mr. Wuzelbacher's talk with Barack Obama.

'Those People' and 'This Guy:' There's a Difference

Mr. Obama said that thinks it's a good idea to "spread the wealth around," as he said to Mr. Wurzelbacher. However, talking to one of those rich people face-to-face, Mr. Obama also said that Joe wouldn't have to worry, personally. 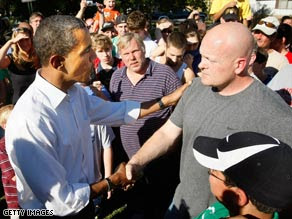 (From CNN, used without permission)
Barack Obama and one of those rich people

I think that we may be seeing what happens when 'those people' become 'this guy.' It's easy to think about people as a collection of relatively homogeneous groups. Particularly when they're 'those people:' commies, blacks, the rich, crackers, Jews, whatever.

I don't know what goes on inside Mr. Obama's head, but it's possible that he went through a tiny paradigm shift, when 'the rich' who deserved to be taxed became some bald guy who wanted to buy a plumbing business.

Mr. Obama, faced with a real person instead of 'the rich,' explained that his tax plan really wouldn't apply to that person: even if he owned a business that brought in too much money.

Or, maybe Obama's tax plan is just a campaign promise. I don't know, and it doesn't matter as far as this post is concerned.

What does matter is that, although groups of people really do exist, so do individuals within those groups. The world isn't just made up of masses of people. It's made up of people who are Euro-American, African, Chinese, Buddhist, Muslim, and who fit into all the other categories we've either noticed or created.

I've noticed, as the American presidential election gets closer, that people, sometimes people in responsible positions, are 'playing the race card,' warning us about the Jews, or calling their constituents racists (and you know what those people are like). I'm not at all comfortable about that.

Even when it isn't as obvious as calling Somalis "monkeys," thinking about other people as just being 'the rich,' or 'the Irish,' or 'the Hispanic,' isn't a good idea. It's too easy to forget that someone with more money, or who doesn't look like everyone else in your neighborhood is a person, not just 'one of those people.'

Enough. I've been on this topic for two days, now.

Related Posts: In the news: Related posts, on tolerance, bigotry, racism, and hatred.