Barack Osama?! A Whopper of a Typo, or Some Kind of Plot?

Mistakes happen. Putting "Barack Osama" on hundreds of absentee ballots was a lulu. 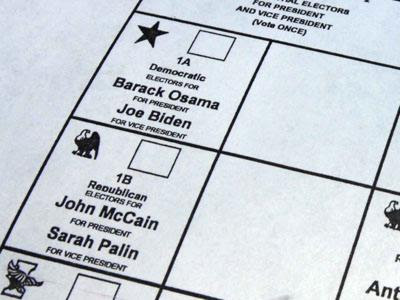 (From Times Union, Albany, NY, via CNN, used without permission)

Eight years after Florida became famous for hanging chads and other weird stories, a county in New York state made national news. Not they way they'd have preferred, though.

Identifying the Democratic presidential candidate as "Barack Osama" on absentee ballots is, at best, embarrassing. As Albany's Times Union put it, "Is it a Freudian slip, intentional act or a mistake? Voters are sure to have opinions, and one pol pointed out that the letters 's' and 'b' are not exactly keyboard neighbors...."

I'm inclined to think that something this wildly daft is a mistake. Yes, three different people proofed the ballot: but I still think it was probably a mistake. I was a copywriter for ten years, and a did clerical and writing work before that. Howlers can get past the best proofreaders and editors.

And, "Obama" and "Osama" sound an awful lot alike. That's not an excuse, but I think that the similarity in sound and appearance to these equally-non-Yankee names may have been a factor in this world-class error getting printed.

As far as it being some sort of plot: The county election commissioner, Edward McDonough, is a Democrat. There doesn't seem to be much of a motive for his trying to sabotage his own party's presidential candidate.

Arabs, Ayers, the Antichrist, ACORN: and Now This

Look Out! The Ay-rabs Are Coming!

McCain chiding a woman for calling Obama an Arab - and getting booed for his trouble. MPR repeated the exchange:

"McCain shook his head in disagreement, and said: 'No, ma'am. He's a decent, family man, citizen that I just happen to have disagreements with (him) on fundamental issues and that's what this campaign is all about.' "

I saw the "Arab" clip on televised coverage. The woman spoke clearly: too bad what she said was nonsense.

That's No Terrorist: That's My Neighbor

The Obama campaign has explained that Bill Ayers is a Chicago professor whose connection with Obama's stems from their living in the same area. The professor's earlier career as a domestic terrorist with the Weather Underground is pure coincidence.

They could be right.

The Antichrist is Running for President!

For full-bore weirdness, my favorite is the claim that Obama is the Antichrist. You know, the King of the South.

ACORN and Registrations from Beyond the Grave

I've already posted about ACORN registering dead people and at least one restaurant to vote.

Trying to, anyway. Lake Country, Indiana, set aside all 5,000 voter registration cards from ACORN, after the first 2,100 were bogus.

To be fair, ACORN brass have said that there's a problem. I agree.

Putting "Osama" on the ballot in a New York county could be some kind of a plot, but I seriously doubt it.

I suppose a story could be made about the election commissioner trying to drum up sympathy for his party's presidential candidate, by distributing an obviously wrong ballot.

Or, maybe someone is trying to sabotage votes for Obama, by printing the wrong name on the ballot.

I think it's much more likely that the people on the election commission did something very human. They made a huge, embarrassing, mistake: in public.