The West and Today's Somali President: The Enemy of Your Enemy is Your Friend? 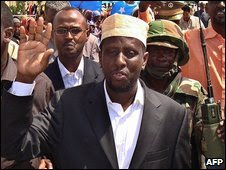 Radio Netherlands' headline reads, "Bin Laden attacks Arab leader." Their article starts with: "In a newly released video recording, Osama bin Laden has lashed out at an Arab leader. In the recording, the fugitive head of the al-Qaeda network called on his supporters to depose the new Somali president Sheikh Sharif Sheikh Ahmad...."

I don't know Sheikh Sharif Sheikh Ahmad's biography all that well: his name and title certainly sound Arabic, and he's a Muslim, but, and I hope nobody will be offended by this: he doesn't look like most Arabs we see.

It's easy to assume that Radio Netherlands saw the name, read that he's a Muslim, and made an assumption. It's possible that "Arab" is a mistranslation in Radio Netherlands' English version. Or, maybe he is an Arab. It any case, once again: Bin Laden is not pleased with the new Somali president. Sheikh Sharif has had control of Somalia's Islamic courts, but " 'as a result of inducements and offers from the American envoy in Kenya, he changed and turned back on his heels' and agreed to partner with the 'infidel' to form a government of national unity...." (CNN)

Don't Read the News: Study it

Or, if you stop at reading: don't assume that you've gotten the whole story. Or even, sometimes, accurate information.

The Curious Case of the Caption Caper

Sharia law's reputation has been taking a beating over the last few years, thanks to the lashings, beatings, and the odd stoning here there that Sharia law calls for. According to supporters of Sharia law, anyway.

Other supporters say that Sharia law is very nice, and not at all incompatible with Western values.

They could all be right. I've gotten the impression that there are considerably more varieties of 'genuine' Islam, than flavors of ice cream in a Baskin-Robins.

Here's what two different captions to photos of the new Somali president said: For the same of girls like Aisha Ibrahim Duhulow, I hope the CNN caption is a better match with reality. Somali courts listed her age as 23, before someone did a little checking. The young teenager had been raped.

Which, according to Sharia law - Somali style - meant that she was guilty of adultery. So, the court had her buried up to her neck and stoned to death. While about a thousand good Muslims watched. One of them explained that they were doing the will of Allah.

Yes, I know: America is Not Perfect

Some decades back, some screwball American judges had trouble telling the difference between a rape victim and an adulteress: but even they didn't pass death sentences, as far as I know. And, that application of warped cultural values to American law made quite a stink.

Yes, I know: Not All Muslims Stone Girls For Being Raped

As I said before, there is quite a smorgasbord of 'Islams' available, around the world. Whether a rape victim is stoned for the 'crime' she committed seems to depend on where she was raped.

I sincerely hope that CNN hit closer to the mark. Quite aside from humanitarian concerns, Somali doesn't need more bad press - pirates in the north fighting Islamic fanatics in the south are doing a fine job of that right now. There's no need to go around, stoning young teens for being raped, and saying 'Allah told me to.'

In Somalia, it looks like no matter what a leader does: it's wrong. Support Sharia, and look like you're out to stone teenage girls; acknowledge the last thousand or so years of developments in human rights, and be called a "surrogate" of infidel America.

No matter what he does, the current president of Somalia is in for a rough time. My hope is that he doesn't do anything particularly stupid or evil, and escapes with his life.

The new president of Somalia has "vowed to introduce Sharia." Osama bin Laden says he wants Sharia established and defended. So, what's the problem? Sounds like Bin Laden has one of his guys in Somalia.

Not so. Apparently Sheikh Sharif isn't establishing Sharia the right way. According to bin Laden.

As the new Osama bin Laden says, "...'beware of the initiatives which wear the dress of Islam and the religious institutions even as they contradict the rules of Islamic shariah, like the initiative attributed to some of the scholars of Somalia which gives Sheikh Sharif six months to implement Islamic shariah. They are asking him for something he was installed to demolish, so how can he possibly erect it?'..." (CNN) Sounds logical enough, given bin Laden's starting assumptions.

Osama bin Laden warned Somali Muslims who have been killing for Allah to beware. They shouldn't, bin Laden said, stop fighting and negotiate with the new Somali president. Sheikh Sharif, you see, is just the "new surrogate" - and he's under American control. According to Osama bin Laden.

" 'All intelligent people are aware of America's combating of Islam, and its past rejection of its establishment in Somalia, as well as in Iraq and Afghanistan,' " bin Laden said in his message. (CNN)

I've heard that "the enemy of your enemy is your friend" is a bit of wisdom that originated in the Middle East. Since that's an ancient center of civilization, I thank that's likely enough.

And, I think it may apply to relations between Somalia's current president, bin Laden, and the Obama administration.

Whatever preferences today's Somali president may have had, now that bin Laden has put the word out that Sheikh Sharif is persona non grata, I think that Sheikh Sharif should seriously consider not antagonizing America and other Western countries. With bin Laden and company gunning for you, a man can't have too man friends.

It goes both ways. If Sheikh Sharif wasn't a "surrogate" before, I think that the Obama administration should seriously consider giving limited and conditional support to the current Somali president.

In a way, the view that many "intelligent" people in America is rather accurate. Despite decades of multicultural studies and the best efforts of America's self-described best and brightest, many American's remain extremely intolerant of some cherished customs of other cultures.