Palestinian Plays Bocce Ball With Bulldozer and Police Car: Blast from the Past

Meanwhile, in Jerusalem, it's the same old thing: Palestinian The Palestinian died on the way to the hospital. The bus he attacked was empty.

This 'lion of Islam' doesn't get points for originality. Using heavy machinery instead of the traditional suicide belt or Katyusha rocket is old-hat by now.

In a touching tribute to the late Palestinian's faith in Islam, an open copy of the Quran seems to have been in the bulldozer. The news hasn't reported what pages it was open to: that might have been interesting. (Before someone has a fit: there's reason to think that this inefficient assassin, Hamas, Al Qaeda, and the House of Saud aren't what Islam is all about.)

Palestinian Attacks Jews with Bulldozer, Backhoe, Tractor, or Something Like That

BBC called the construction machine a front-end loader. I don't think this shows confusion so much as the bewildering diversity of the English language.

The yellow fuzzmobile-whacker has been called a 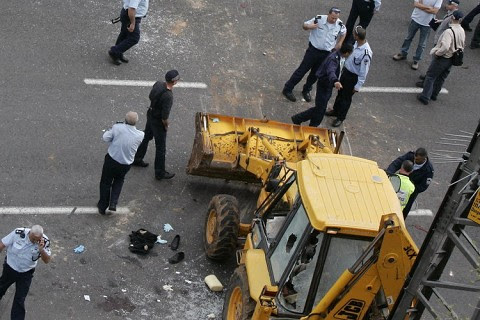 (from AFP, via Welt Online, used w/o permission)

I'll settle for showing a photo, and letting you sort out what to call it.

And it's the Fault of the Jews

"...Hamas described the attack as a 'natural response' to the demolition of Palestinian homes in East Jerusalem and to the recent offensive in the Gaza Strip...." (guardian.co.uk)

Meanwhile, Hamas Calls for End of Violence: Sort of

Not so much a call for peace, as a turf dispute, and a very real desire to re-arm before pushing Israel too far, again, I'd say.

Attack on Fuzzmobile: A Trip Down Memory Lane

I grew up in the sixties, was in college in the seventies, and remember the 'good old days.'

It was a period of groovy art, cool music, daft ideas, and rock-throwing peaceniks. To be fair, there were non-violent peace-lovers, too: some acting out of a sincerely-held set of beliefs; some too stoned to do much of anything.

Those glory days of anti-war activism were also when all right-thinking people (left-thinking, actually - another oddity of English) hated authority and the police. And, generally called law enforcement personnel 'the fuzz.'

So, reading that a Palestinian (no doubt driven to social awareness and action by The Man) had played bocce ball with a fuzzmobile was a sort of trip down memory lane for this survivor of the sixties.

I've wondered if one reason that some of the better sort in America support the Palestinian Cause is a sort of nostalgia: a yearning for the good old days, when "My Lai" was on everyone's lips, the military was hated, and the fuzz despised.

God knew what he was doing from the very beginning. He decided from the outset to shape the lives of those who love him along the same lines as the life of his Son. The Son stands first in the line of humanity restored. We see the original and intended shape of our lives in him. ROMANS 8:29

On the off-chance that your comment has something to do with this post, I'm leaving it stet.