I live in Minnesota, where there's a chance that legal wrangling over whose ballots get counted, and whose vote won't count, will get sorted out before the next Senatorial election.

Real-world democracy isn't an ideal system, and America isn't a perfect country. But it could be worse.

I mentioned Guinea's politics last December. Guinea-Bissau is smaller than Guinea: It's a bit of swamp and lowland between Guinea and Senegal.

Yesterday, the country's military leader was blown up. Today, Guinea-Bissau's president was assassinated.

In a way, it doesn't matter who did what to who: Guinea-Bissau is going to be somewhat more messed up than usual for months. Maybe years, depending on how successful one side is at massacring the opposition. Literally, not figuratively.

Judging by the history of places like that, after the bodies are collected there will be a period of comparative peace, until someone gets enough muscle together to try taking over.

What, if Anything, Does This Have to do with the War on Terror?!

I think it's useful to remember what the world is like.

There are nations like America, China, Russia, and India: large, relatively stable, comparatively prosperous. If your country isn't in this list, sorry about that: I wanted a short list, with a diverse a mix of geography and culture, and was in a hurry. No offense intended. Also: I think that America isn't, strictly speaking, a nation, by some standards - but that's an entirely different topic.

These comparatively large, powerful, nations are not perfect. But their leaders have a tendency to stay alive for extended periods of time after getting the job, and often display moderately average levels of good sense while on duty.

Then, there are nations like Guinea-Bissau, Swaziland, Comoros, and Burkina Faso. The well-intentioned (I trust) 20th-century practice of European nations, to grant or acknowledge their colonies' independence, hasn't been an unmitigated success.

It Seemed Like a Good Idea, at the Time

I think part of the problem is that carving up colonial territories in the Treaty of Versailles didn't take economic viability, languages, culture, and regional history into account.

Then the colonies became independent nations. With colonial authorities gone, there wasn't anything to stop the tribes, families, or other factions whose old territory hadn't been recognized by the Versailles treaty from trying to kill their rivals.

The way I explained it to my kids was to imagine Europe being colonized, run by alien overlords for generations, then split up into new 'nations:' like Francany, made from parts of France and Germany; and Iberitain, composed of the Iberian peninsula and those islands to the north.

The bratwurst-and-beer bunch in Francany might get along just fine with the wine-and-escargot factions. Then again, they might not.

Diplomacy and international relations would be easier, if countries were more uniform. But, they're not.

I think it's vital for representatives of a country like America to treat local and regional leaders with courtesy and respect. After finding out what they regard as "courtesy" and "respect," of course. That's not the same as assuming that whoever is running a place like Guinea-Bissau at the moment is equivalent to, say, the President of France.

Guinea-Bissau? Never Heard of It 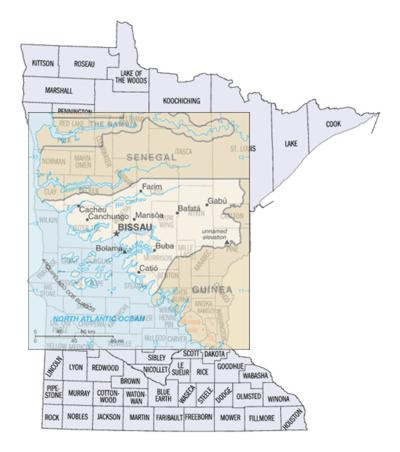 Guinea-Bissau's population is about 1,500,000, compared to Minnesota's 5,200,000 or so. The country is known for its bacterial and protozoal diarrhea, hepatitis A, typhoid fever, malaria, yellow fever, schistosomiasis, meningococcal meningitis, unstable politics, and grinding poverty: It's one of the five poorest countries in the world.

With all that coastline, and a winter-free climate, I think Guinea-Bissau has potential for becoming a vacation destination, and regional port facility. Eventually.

(I guessed at Minnesota's current population by taking the state's 2007 estimate and assuming that we've had around the same growth as 2000-2007.)

interesting to hear about news from smaller countries. shows the direct middle east (Main nations like Iran, Israel, Egypt,Iraq ETC.) is not the only spot facing a battle with terrorism.
perhaps we will be seeing more of this small nation in the news in the coming weeks. I hope we as Americans can learn to know our facts about the war on terror and not only focus on the groups in the middle east.

Thanks. You might find "Terrorism East of Lahore" of interest. It's a list of links to (most of) this blog's collection of "Posts about terrorism east of Pakistan, and south of Egypt:"

This week's transition of leadership in Guinea Bissau may be more a matter of 'politics as usual than terrorism. But, since the African Union is interested in Guinea Bissau - and that country is not predominantly Muslim, like many of its neighbors, it doesn't hurt to keep an eye out for developments.

And - yes, terrorism, and other issues, aren't limited to the Middle East. By any means.