A car bomb went off in a Middle Eastern country. This time it was in Yemen, outside an American embassy in Sanaa. Over a dozen people were killed.

A group calling itself Islamic Jihad in Yemen says they did it.

The Yemeni government rounded up about two dozen suspects: pretty standard procedure over there, after a bombing. Yemen, or rather Yemen's national government, is said to be a strong ally of America in the war on terror. I've read that before. Last year I didn't believe it, following the release of Al Qaeda leader Jamal Badawi, who planned the 2000 Cole attack.

Changing My Mind About Yemen

Since then, I've had to revise my opinion. From what I've read, I think it would be more accurate to say that the Yemeni national government is an ally of America in the war on terror.

The tribesmen of Yemen, who haven't gotten used to the idea of nation-states yet, don't seem to pay much attention to what the national government wants. My guess is that it's more important for them that Osama bin Laden's family came from Yemen. Besides, Al Qaeda says that they're protecting Islam from unbelieving foreigners: and America is just simply crawling with foreigners.

All of which may give Al Qaeda a sort of home-town advantage in those parts of Yemen that haven't quite caught up with the 18th century.

Winning Friends and Influencing People in the Islamic World

One of the people killed in that embassy bombing was Susan El-Baneh, 18, of Lackawanna, New York. She and her husband had married less than a month ago. It must have been quite an event. Her brother said that the whole village turned out. 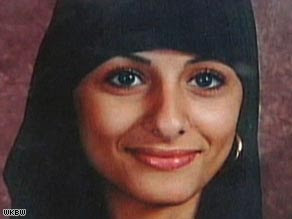 The two of them were in the process of sorting out paperwork so that they could both go to America, where she planned to finish high school, and become a nurse. As her brother, Ahmed El-Baneh, put it, "... she was taking advantage of the times now when a Muslim lady can go to work, doing what they want, not just being housewives. She was going to get her education and be successful."

That's not going to happen now, of course.

Judging from Ahmed El-Baneh's reaction to her death, I'd say that whoever ordered that hit didn't make many friends in Sanaa. As Ahmed put it, "... if you die in the month of Ramadan, you go straight to heaven, and that is where my sister will be," Ahmed El-Baneh said. "But anyone that did this cowardly act, they will go straight to hell."...

"...Muslims are supposed to be peaceful, he said, and those who committed the attack on the embassy in Yemen only smear that view.

"... 'They say they do this for a cause, but there is no cause,' he said. 'A cause is when you sit down and talk, not when you kill millions and millions of people, now including my sister among them. What is the cause for that?' ..."

Jaber El-Baneh, accused of being the seventh member of the Lackawanna Six, is on the FBI's most-wanted list. The other six were convicted of helping Al Qaeda. (The Liberty City Seven are an entirely different bunch.)

The El-Banheh name is no coincidence: He's one of Susan El-Baneh's relatives. Remember, though: the bin Laden family went to rather great lengths to distance themselves "the" Osama bin Laden. Odds are pretty good that not all El-Banehs are on the same page as Jaber.

Arranged Marriage! The Horror! The Shame!

Say "arranged marriage," and many Americans will probably think of some lurid melodrama, a tale of love and intrigue in feudal times, the latest honor killing in the news, or some combination of these. America and, as far as I know, all western countries, let people decide for themselves who they're going to marry.

Not all cultures work that way. People in some parts of the world depend more on reason, tradition, and experience than on endocrine systems for making life-changing decisions. Susan El-Baneh's marriage was arranged.

That, and her age, seems to have impressed some bloggers ("Arranged Death," for example). The part of the world the cited blogger comes from regards 18 as a bit young to get married. In some parts of the world, that 18-year-old would be an old maid, getting seriously long in the tooth.

The point is, not everybody is a Valley Girl, or from a proper Boston family. We'd all better start getting used to that.

When Susan El-Baneh's uncle went to the hospital to see what was left of his niece and her husband, the bodies were still holding hands.