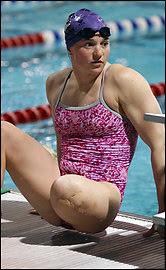 In an MTV News article, Melissa Stockwell says that she's represented American before, in uniform as an Army lieutenant. She's representing America again, in the 2008 Paralympic Games.

Three things jumped out at me when I heard what Melissa Stockwell had to say, and read up on her. I like her attitude. It's not the only way someone could approach losing a leg.

A young man I ran into at college, a few decades back, had hurt a leg in a motorcycle accident. He was rather tightly focused on how disgustingly bad his condition was.

That young man had it rough. He was born with functional legs, and had to adjust to working with defective equipment. Happily, I was born with gimpy hips. That gave me opportunities to give my arms and shoulders a workout, when most people are learning to crawl.

Which explains why I understand about swimming and upper body strength. Swimming was the only part of physical education where I got good grades.

Back to Melissa Stockwell. With about 1¼ legs and a prosthetic, she's not going to be running the Boston Marathon: not very well, anyway. On the other hand, compared to the way most of us thrash around, she's a very good swimmer.

Melissa Stockwell and her husband live in Chicago now, but she came from Minneapolis, Minnesota. That's the state where I live, and I rather like to see a fellow-Minnesotan do well.

I get the impression that traditional news media, with their preoccupation with body counts, ruined lives, and alleged atrocities, often misses an important point. A country's armed forces represent that country, as a forceful diplomatic tool.

The American armed forces were rather rough on parts of Iraq when the coalition removed Saddam Hussein from power, and later when the Surge made it possible for the new Iraqi government to start sorting itself out.

That got quite thorough coverage. The American military's undoing decades of neglect in Iraq's infrastructure, not so much.

That reticence may be understandable. It's hard to imagine a journalist getting a Pulitzer Prize for reporting on some boring project, like repairing a sewage plant. It's exciting stuff, like a horribly unforgivable atrocity or an 8-year-old heroin addict, that gets attention and gets the prize. Besides, My Lai's Seymour Hersh and Jimmy's Janet Cooke were educating the public about relevant social issues: not reporting boring facts about the American military.

On the other hand, John Burns, winner of two Pulitzer Prizes, learned that journalists don't get much attention when they let facts get in the way of a story ("Top Newspaper's Journalists Praised: Blackout Imposed on Praise" (October 15, 2007)).

I've wondered how much American war coverage over the last 40 years has been affected by journalists' choosing between going with the flow and getting adulation, or reporting unwanted facts and getting ignored.

I hope - and think - that there are many Melissa Stockwells out there, representing the America I know: an imperfect country that offers its citizens freedom and opportunity.

More: Related posts, on Individuals and the War on Terror.