Nancy Pelosi's 757: Security, Common Sense, and Getting the Facts Straight

'Everybody knows' that Speaker of the House demanded - and got - a 757 to fly her back and forth to her home in San Francisco. With a $5,000,000-plus annual cost that taxpayers pick up.

This flagrant lack of fiscal responsibility and disregard for the perils of global warming and the disappearing spotted owl is:

It's a fact: Speaker of the House Pelosi does use a C-32 for traveling from Washington, D.C., and back. And, it's at taxpayer expense.

But, I think it's reasonable - and responsible.

Besides, I did some simple math, and found that, as an American taxpayer, and assuming that the expense is distributed evenly, Pelosi's jet costs me about two cents a year. That's $0.02 USD.

Even these days, I can afford that. 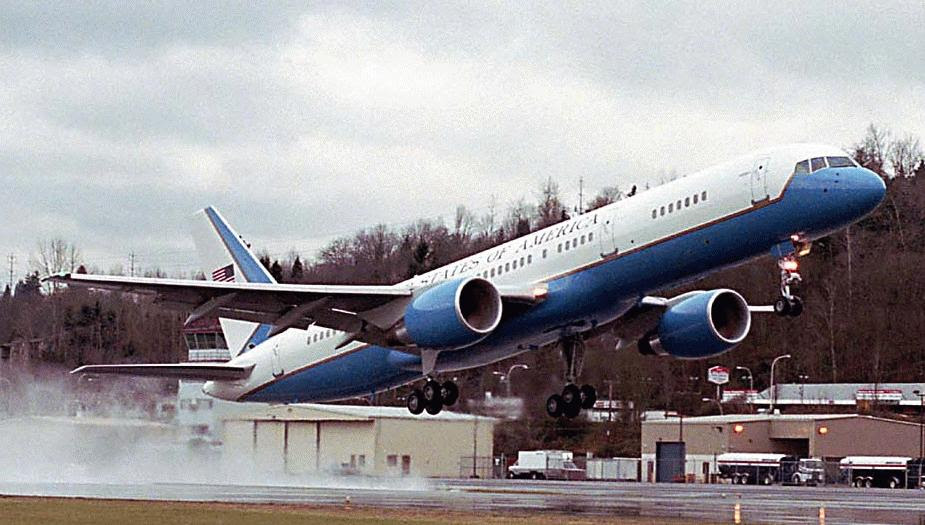 (from FAS, used without permission)
I don't get to use a jet like that: Why should Nancy Pelosi?

The first Boeing C-32A, intended for the presidential airlift fleet, rolled off the assembly line in 1998. They look a bit like the commercial 757-200, but they are not the same airplane:
(Sources: FAS, Boeing)

After 9/11 made the American Congress a bit more personally aware of security issues, the House Sergeant at Arms, Bill Livingood, seems to have been the one who recommended the C-32A. 1

Whoever the Speaker of the House is, that person becomes president if something very bad happens to the president and the vice president. Having someone in that position take commercial flights across the North America continent might save a few bucks, but it wouldn't be particularly safe: Not for the Speaker, and not for anyone riding on the same airliner.

Like it or not, America is at war: and high-level officials are targets.

So yes: it makes good sense to put the Speaker of the House on a military transport that's equipped with specialized information technology. And, that can fly from Washington, D.C. to San Francisco without landing.

The reason for the house speaker getting special treatment has been public knowledge since February, 2007: The problem is, members of the public have to read about it.

I don't know how the House Sergeant at Arms and the Pentagon worked out the details, but the bottom line is this: the Speaker of the House is the American president if someone manages to take out the president and the vice president. I'd just as soon go a little overboard in keeping the speaker safe.

I do know that the story of Pelosi and the 757 is still around. Parts of it, at least.

I've been over this before: assumptions aren't facts. Rumors, or what you heard from some guy, may be true: but they may not be, too.

This story about Nancy Pelosi's 757 came up this month, in a 'letter to the editor.' It read, in part, "...I agree that these companies do not need one corporate jet, much less nine. But how can Ms. Pelosi tell these executives to fly commercial when she has a 757 to travel back and forth to California at taxpayers' expense?" (ReviewJournal.com (December 5, 2008)).

I'm no fan of Pelosi's political views, but the car company executives aren't the speaker of the house. As important as the auto industry is, if an airliner they were on blew up it wouldn't have quite as big an impact on America. And, it's not as likely that Al Qaeda or terrorist wannabes would try to take out some CEO.

So, that's how Ms. Pelose can tell these executives to fly commercial while she (sometimes) flies in a 757.

Sometimes, when I read about, or hear, someone whose connection to this space-time continuum is shaky, I wonder if that person will vote.

A resource I put on the blogroll wrote: "Everyone is entitled to their own opinion, but not their own facts...." (globalsecurity.org) Sometimes, I tell myself that the crackpots who really believe that the CIA blew up New York's World Trade center, and the ones who think a secret cabal of liberals, Catholics, Masons, and Jesuit assassins are behind America's problems, cancel each other out.

News and views: Background: 1 An interview aired on Fox News this morning got me started on this post. The interviewee said, among other things, that the recommendation for using a C-32A came from the House Sergeant at Arms. News published at the time seems to back that up.

Nancy Pelosi: I just received an email about Nancy Pelosi and the 757 and as a Democrat, was floored.Now that I've read the true story,I understand.I hope she doesn't run back and forth every week like the email suggested!If you accept a job in Washington,then you should live there most of the time.Don't take advantage of the tax ppyers!

I'm afraid you'll be getting emails about Nanci Pelosi and the 757 for quite a while.

I'm not sure I agree, though: I live in Minnesota, and would just as soon that Minnesota senators come back to the land of shovel and swat at not-infrequent intervals, to get reminded of why we sent them inside the Beltway.

Just a point that everyone should be aware of:
A Gulfstream could easily be used instead of
a 757 if it's range that is the issue.

Saying that they needed the 757 since it is the
only thing with enough range is absurd. A G5, or
military version c37a can not only make it DC from
San Francisco non-stop- it could make it there and
back without landing WITH fuel reserves!