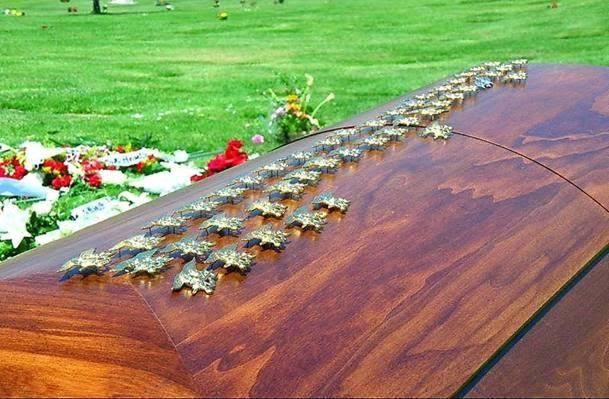 There's a story going around that the photo, at least, of Michael A. Monsoor's trident-studded coffin is a fake. That's because "You can't get such alignment by slapping badges on a coffin as it passes by."

I did a little checking into the story, and wrote an update to "Golden Tridents on Petty Officer Michael A. Monsoor's Coffin" (July 5, 2008).

The bottom line is this: the video (embedded in the original July 5, 2008, post) shows SEALs approaching an essentially stationary coffin, and carefully placing each trident, before pounding it in place.

A lesson here may be to take a closer look at available evidence, before declaring something to be a hoax. Update, of a sort:

Folks are loathe to do research, don't you know? It's rather indicative of our unique American apathy towards all things. Knee-jerk reactions are quite a bit easier. I enjoy the depth and respect you apply to your postings.

Thanks for the good words. I think respect is important: although some things warrant more than others.

About Americans and apathy, I don't know. I've run into what might be termed knee-jerk reactions from all over: "Nero Was Working for the Christians: Who Knew?" (March 22, 2008), for example.

No disrespect, but if you'll look in the video (8min 45 sec)at the coffin they are pounding the tridents on, it is far too short, narrow, and small to be an adult male's coffin. It looks to be a replica that is approximately 3 feet long, and if you really look, there is no seam for the lid which is used for viewing. this coffin appears to be a child sized coffin, mostly used for babies. Maybe the trident pounding is symbolic, and they retrieved their tridents after the ceremony?