It's a cool photo: Four missiles rising into the sky at a dramatic diagonal, demonstrating the armed might of Iran.

Just one problem: There were really only three in the air. The fourth one was a copy of one of the other missiles, combined with smoke on the ground from another.

(from The Lede/The New York Times, used w/o permission)
Wow! Impressive, isn't it?

(from The Lede/The New York Times, used w/o permission)
Oops! One's still on the ground.

The official Iranian photo was on the front page of The Los Angeles Times, The Financial Times, and The Chicago Tribune, before the Associated Press got a copy of the pre-enhanced photo. Newspapers weren't the only ones embarrassed: online news services like BBC News, MSNBC, Yahoo! News, and NYTimes.com were displaying the doctored photo, too.

The Associated Press found the original photo, and distributed it: and there's a pretty good discussion - with photos - of what happened at The New York Times blog, "In an Iranian Image, a Missile Too Many"
(The Lede/The New York Times (July 10, 2008)).

I think I understand why Sepah News, Iran's Revolutionary Guard's media section, improved the look of their original photo. Showing a test-firing of four mighty missiles, where one is just sitting on the ground, just doesn't have the impact of showing a test firing where all four worked.

And, I'll have to admit that Iran's retouching was much better done than Adnan Hajj's, back in 2006. You may not remember him: He's the Reuter's freelance photographer whose sub-amateurish work on a photo showed extra smoke - and a duplicated building - in a Beirut, Lebanon, suburb. 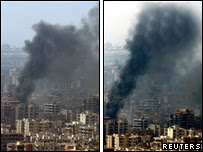 (from BBC, used w/o permission)

Even untouched photos can tell a story that isn't true. Here's how: Really tugs at your heartstrings, doesn't it?

I haven't found any reliable discussion of what I'll call The Strange Case of the Clean Toys. My speculation that those Pathetic Reminders of War's Destruction of Innocent Victims were about as real as the space aliens I'd see on tabloid covers is just that - speculation.

An important lesson to be drawn by this week's fake photos is that reasoned skepticism is a good idea. Even when it looks like there's photographic proof.

According to an American source, today's 'full round of tests' was more a matter of getting yesterday's dud off the ground.

As is often the case, it's a matter of who you're going to believe: "a senior U.S. military source" or the people who did such a good job of retouching yesterday's publicity still?