The Holy Father, Pope Benedict XVI, hasn't landed at Andrews Air Force Base yet, but he's on his way. American news media has been on the story for a day or so already. Here's a sampling of today's headlines and articles. Well, one of those had a report from the Papal plane.

For me, this is a flashback to the "...former alter boy" reporting that succeeded "...Vietnam veteran" as a required descriptor for any malefactor who had grown up in a Catholic neighborhood - or been drafted during the Vietnam war. 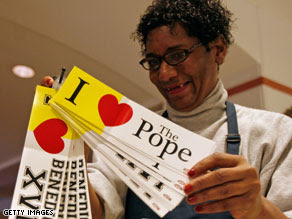 CNN's face of Catholicism in America:
"Terri Harland shows off bumper stickers on sale at
Catholic University in advance of a
visit by Pope Benedict XVI."
I've found that one of the more effective ways for a news service to make a point, yet maintain plausible deniability, is to display a carefully-chosen photograph. Pictures don't lie, right? Back in the sixties, I learned that members of the VFW American Legion were, almost without exception: I can't help but think that the lady in that photograph, who is only slightly more likely to be the next Miss Universe than I am, was selected in part for her similarity to the sophisticated New Yorker's image of a rustic Catholic. (Please, don't accuse me of sexism, racism, lookism, or whatever-ism: Terri Harland isn't the issue here; CNN's use of her image is.)

I suppose we will be hearing a great deal about the pedophilic mess in the American Catholic Church. And, I think we'll hear that the Pope said something like 'out now' or 'no blood for oil.' It's even possible that the Pope actually will make a statement like that: more formally, Benedict XVI's style being what it is. I've posted about this before ("The Pope Comes to America: A Prediction in a Very Catholic Post" (April 13, 2008)).

American news media is good at covering sports events, grass fires in suburban Los Angeles, and other topics that their editors and reporters understand.

I strongly recommend that anyone who is interested in what the Pope actually says, not what an editor thinks he really meant, follow the Papal visit on "Pope Benedict XVI Apostolic Journey to the United States" (April 15 - 20, 2008), on EWTN.com. The people at EWTN do understand Catholicism, and have an established track record of high production values.

Whether or not China "as a lot more to offer than the Pope," depends on what aspect of existence is considered.

It's true that the Vatican has virtually no capacity for manufacturing large quantities, lead-tainted or otherwise, of inexpensive toys, and has limited software production facilities.

However, there's more to life than consumer products. Although I have not researched the topic thoroughly, I suspect that the comparative record the Vatican and the Chinese government, regarding human rights violations, might have something to do with the dining arrangements.

If I were to advise the current leaders of China, I would suggest that they would gain greater respect by: following the British example of granting independence to conquered territories; and treating their Muslim minority as something other than alleged perpetrators of terroristic acts inside China. ("Report: China thwarts terrorist attacks" CNN (March 9, 2008))