There's a specialty T-shirt with a message that I really liked: haven't seen it in years. The front looked something like this: 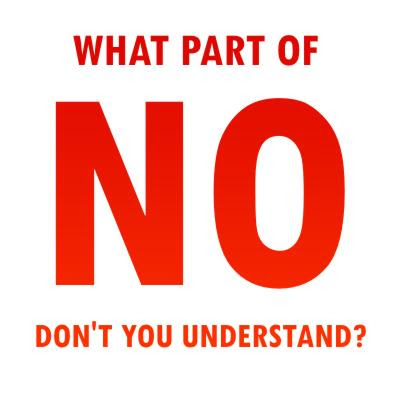 Today's news reminded me of that shirt:

Excerpts: "In an interview with NPR, Carter said the State Department did not warn him off the trip. A State Department spokesman in Washington took issue with that on Monday, and Rice was more blunt in her account Tuesday."

"Attending a regional meeting on Iraq's security and future Tuesday, Rice contradicted Carter's assertions that he never got a clear signal from the State Department. Rice told reporters that the United States thought the visit could confuse the message that the country will not deal with Hamas.

" 'I just don't want there to be any confusion,' Rice said. 'The United States is not going to deal with Hamas and we had certainly told President Carter that we did not think meeting with Hamas was going to help' further a political settlement between Israel and the Palestinians."

In terms of diplomacy, the trip wasn't a complete wash: "Carter says top Hamas leaders told him during seven hours of talks in Damascus over the weekend that they are willing to live next to Israel, but a top Hamas official said the group would never outright recognize the Jewish state."

Maybe we should be more understanding of Former President Jimmy Carter's position, in light of his statement on NPR.

Mr Carter really wanted to go on that trip, and meet with Hamas leaders. And, he's a man.

Most women will recognize that there are men who, once they decide that they want something, either can't or won't listen to any verbal communication.

That's why they carry Tasers and cans of Mace, and learn martial arts. A previous post, which touched on what the State Department and Congress did, trying to get Mr. Carter's attention: "Former President Carter, Hamas, Khalid Meshaal: Definitely Not Routine" (April 17, 2008).

Related posts, on Individuals and the War on Terror.

what is your opinion on,

news never revealed inside the US one wonders why?

My opinion on the Reuters article and video is that Reuters, once again, did a pretty good job of reporting.

As for "news never revealed inside the US one wonders why?" -

That presupposes that this news was never revealed inside the US.

A newer post, "News Never Revealed Inside the US!
Reality Check, Please" (April 23, 2008) shows what a few minutes with Google can turn up.

Older posts on Mr. Carter's trip are listed in "Individuals and the War on Terror" - They make good reading, if I do say so myself.