"Hasidic Newspaper Apologizes for Editing Clinton Out of Situation Room Photo"
FoxNews.com (May 9, 2011)

"The photo of the White House Situation Room was widely published after it was released by the Obama administration a week ago. Perhaps the most enduring image in that photo was that of Clinton with her hand over her mouth....

"...In a statement obtained by The Washington Post, Der Zeitung apologized for the alteration and said it has 'conveyed our regrets and apologies' to the White House and State Department.

"The newspaper explained that the editor who made the change had not seen the White House conditions for publication, which stipulated that the photo 'may not be manipulated in any way.'..."


I'm inclined to believe the paper's account - and think the apology was prudent, at least.

As for their motivation in reporting a sort of alternate-reality version of the White House photo? Here's the paper's story:


"...The statement went on to say that while Clinton has served 'with great distinction,' the newspaper does not publish images of women 'in accord with our religious beliefs.'

" 'Publishing a newspaper is a big responsibility, and our policies are guided by a Rabbinical Board. Because of laws of modesty, we are not allowed to publish pictures of women, and we regret if this gives an impression of disparaging to women, which is certainly never our intention,' the statement said."
(FoxNews.com)

For what it's worth, I'm inclined to believe the editorial explanation for faking that photo.

If the editors want to live in a make-believe world where women are invisible - well, that can be done in fantasy role playing games. If they want to let their readers know what's going on in the world we all share: It would, in my opinion, have been more prudent to deal with the presence of women in text, and omit the photo entirely.

What interests me most about Der Zeitung's (or Der Tzitung's) decision to edit Hillary Clinton and another woman out of a picture - and publish the doctored photo - is why they thought they could get away with it. I'll get back to that.

Here's a better look at the altered photo looks like: 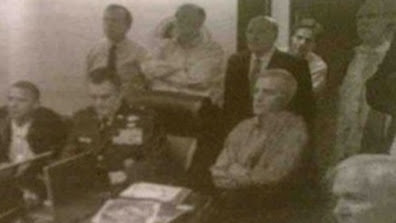 And here's what that picture looked like, as released by the White House: 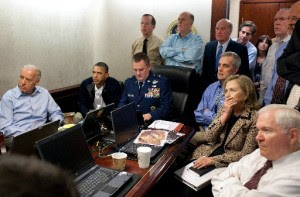 Before getting to my take on the situation, two excerpts from today's news and views.

First, from a source that seems quite certain about why the Brooklyn paper edited the two women out:

"An ultra-Hasidic newspaper in Brooklyn stirred up outrage after digitally removing Secretary of State Hillary Clinton (and National Security team member Audrey Tomason) from the iconic photo of President Obama and others watching the raid on Osama Bin Laden's compound.

"The paper, Der Tzitung, has a policy against showing photos of women, considering them 'sexually suggestive.' Sure, that's the first thing readers would have thought when Golda Meir was Israeli prime minister...."

Where did the San Francisco Chronicle's blog learn that the Brooklyn paper considered photos of women 'sexually suggestive?' That's a good question - and one that's not answered in the post.

Another piece, written with a somewhat less certain point of view:

"A Hasidic newspaper apparently edited Secretary of State Hillary Clinton and one other female adviser out of the iconic photo showing President Obama and his security team watching the raid on Usama bin Laden's compound last weekend....

"...But the version of the photo that appeared in the Brooklyn newspaper Der Zeitung, an Orthodox Jewish publication, did not show Clinton, or Audrey Tomason, director for counterterrorism, who also was in the room.

"The Jerusalem Post, which published an article on the alteration, suggested that the Brooklyn newspaper edited the women out because of concerns about women in positions of power. Others suggested that claims of modesty barred the newspaper from showing images of women.

"The newspaper may also have violated the White House conditions for publication, which stipulates that the photo 'may not be manipulated in any way.'..."

Editing Women Out: My Take

I don't know why the Tzitung/Zeitung editors decided to remove the women from that photo. Their motive may be important - at least to the newspaper's readers - but I'm pretty sure that I'd have a difficult time sorting it out from a welter of claims and assumptions. I'm also pretty sure that the effort wouldn't be a good use of my time.

I am, on the other hand, fairly confident that:
All of the above are 'in my opinion,' of course.

That said, it's my opinion that if the Brooklyn paper's editors had a problem with publishing a photo which included a woman - it would have been more prudent to exclude the photo entirely.

What really astounds me is what appears to be an assumption that doctoring a photo like that would go unnoticed. Brooklyn isn't all that isolated from the rest of America - and even folks who can't read Hebrew can recognized an obviously-faked photo.

I think that response to this blatantly-altered photo should serve as a wake-up call to folks in any of America's subcultures that we all live in a big, diverse world.

I also think that it's a good idea, whatever values a person or subculture has, to deal with the real world - not try to live a fantasy-land built around personal or traditional preferences. But that's just my opinion.

Somewhat-related posts:
News and views:
1 I'm a practicing Catholic, which makes a difference in how I see the world. I've discussed points relevant to this post, in another blog:

It still bothers me that they did such a good job of editing out the women and yet they disregarded the aspect ratio when resizing it. Maybe it's because of my graphic arts training, but the stretched heads are rather obvious. And annoying.

I see what you mean - literally and figuratively. I still think it was an ill-advised effort to simulate a subtle light 'flare' in the original photo. Or maybe a result of deadline pressure.

The big question, though, in my opinion, is why the newspaper staff thought they had to run the doctored photo - and why they thought nobody would notice.