Barack Obama's Birth Certificate, and Getting a Grip

As I've said before, this isn't a political blog. Not in the sense that I say one person or party is always right, and everybody who doesn't agree is stupid. I can't ignore politics, either, since this blog's topic is the war on terror - and politics affects decision-making.

I didn't vote for President Obama in the 2008 election, and I do not agree with many of his policies. But I am not "against" him as an individual. I think America could have a better president - and that's another topic.

Some reactions to candidate Obama and President Obama remind me of the way another set of folks reacted to George W. Bush. And that's not another topic.

There's been a sort of conspiracy theory going around that Barack Hussein Obama isn't a 'real' American. My guess is that the notion will be as firmly-planted in popular culture as the idea that the CIA blew up New York City's World Trade Center. Or that Elvis lives - although the latter seems to be fading.

Today's news is, in my opinion, interesting: but hardly a surprise; and almost certainly not the end of 'Obama ain't no reg'lr American.'

A selection of news about Obama's birth certificate:


"This is the document the 'birthers' have clamored for -- President Obama's long-form certificate generated at the time of birth, with more details than the short-form summary the president previously had produced.

"His failure to make this document public is what the birther movement has used to argue Mr. Obama is not a U.S. citizen. They say the short-form (even though certified by the state of Hawaii) could be a phony document created well after the fact...."
(CBS News)
"The White House has released President Obama's long-form birth certificate, saying the document is 'proof positive' the president was born in Hawaii.

"The release marked an unexpected turn in the long-simmering, though widely discredited, controversy over Obama's origin. Obama's advisers have for the better part of three years dismissed questions about the president's birth, directing skeptics to the short-term document released during the 2008 campaign. But as the issue gained more attention at the state level and particularly in the 2012 presidential race, Obama said Wednesday that it was starting to distract attention from pressing challenges like the budget...."
(FoxNews.com)
"President Barack Obama released his long-form birth certificate, saying he wanted to end the "silliness" of false claims he was born outside U.S. that were distracting from urgent debates over the nation's future.

"Renewed questions about his birth have dominated the news in recent weeks even as the country is in the middle of a debate about the federal budget and how to cut the nation's debt, Obama, 49, said at the White House. He said the issue should have been settled during the 2008 campaign and that he wouldn't normally engage critics who are raising the issue...."
(The San Francisco Chronicle) 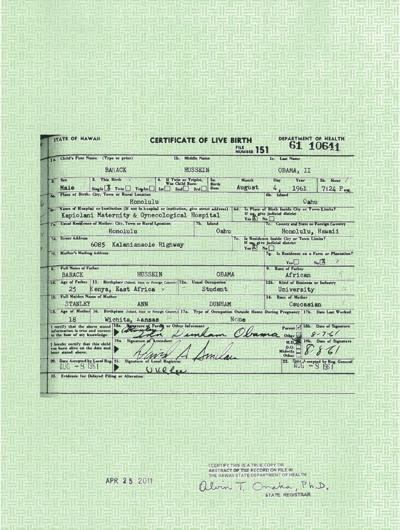 (FoxNews.com, via Snopes.com, used w/o permission)

Could it be a forgery? Is this part of a massive conspiracy? Are space-alien, shape-shifting, lizard-men involved?

Could be, but I doubt it.


"...All public knowledge of Barack Obama indicates - strongly - that he was born about 10 years after I was, in the State of Hawaii. And it turns out that he may not have a 'long-form, hospital-generated birth certificate ... within the vital records maintained by the Hawaii Department of Health.'1

"Does this mean he's not 'really' an American? Or that 'the truth is out there,' and some vast conspiracy is keeping 'regular Americans' from knowing it?

"At this point, I don't think so. Or, rather, I don't think there's reason to assume that Barack Obama isn't, legally, an American citizen, born in one of the 50 states.

Although just barely. Hawaii became a state in 1959. Oddly, I haven't run into anybody claiming that Hawaii isn't really a state in this country. And that's almost another topic...."
(January 29, 2011)

I think that most folks, if they've tried dealing with government bureaucracies, would agree that a state office taking a year or so to dredge up a particular record - isn't really all that surprising.

In my considered opinion, I think that President Barack Obama:
I also think that the CIA did not blow up New York City's World Trade Center.

Conspiracy theories can make entertaining stories. But the notion that Barack Obama isn't 'really' an American? I think that's as plausible as the screenplay for Plan 9 From Outer Space.


Why Release the Birth Certificate Now?

As I said, this isn't a political blog - but who wins the 2012 presidential election will make a difference in how America reacts to folks who want to kill Americans.

I ran into this opinion on televised news: that Obama released his birth certificate now, because Donald Trump has been making an issue of it. I think that's a plausible bit of speculation.

Something missing: "I ran into opinion on televised news"

Wrong word: "The argument is that Obama wants to with the 2012 presidential election"

And I really hope Mr. Trump doesn't get the nomination for Republican candidate. *shudder*