Missile Launched Near Los Angeles: Prelude to Attack, or the Next Bond Movie?

There's a really good chance that this was the contrail of a jet - seen from a modestly unusual angle. I've discussed this in another post:At this moment, I'm assuming that the "substantial missile" spotted by a KCBS news helicopter was launched by:It's the 'somebody else' option that has me - a little concerned. It would be a major coup for one of the outfits whose leaders have decided that America is the reason for their problems. In the "counting coup" sense of the word. 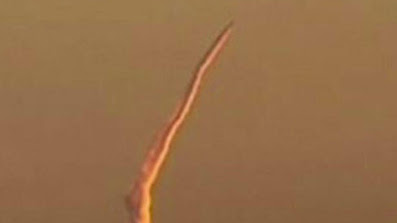 (KCBS, via FOXNews, used w/o permission)
"Nov. 8: An unexplained missile is shot off the California coast."

I'm pretty sure it's not the work of:I was going to put 'the commies' in that list - but that's actually a remote possibility.

North Korea might be able to at least borrow a launch platform - maybe a submarine or an innocuous-looking surface vessel.

China has the capability for a launch of this sort. But their thing lately seems to be hack attacks on computer networks and toxic Snickers Peanut Funsize and baby formula. (March 20, 2010, February 19, 2010, May 25, 2009, October 4, 2008, September 29, 2008) I'll admit that the toxic candy and baby formula might not have been intended as an attack. China seems to be having trouble adjusting to the idea that folks not under their control really don't like melamine in their food. And won't keep quiet when it shows up. Which is another topic.

"THE Pentagon said a missile launch off the southern coast of California remained "unexplained" and that its mysterious origins meant that it was not possible to rule out any threat to the homeland.

"However, Pentagon Spokesman Colonel Dave Lapan would not confirm that because the military does not know what the missile was or where it came from.

"Col Lapan added that the incident did not appear to be a regularly scheduled test, as no warnings to mariners or airmen appeared to be issued ahead of its launch.

"The contrail was caught on camera by a KCBS news helicopter at around sunset Monday evening, approximately 50km out to sea and west of Los Angeles.

"The missile appeared to be launched from the water, and not from US soil, Col Lapan added.

"The military was trying to solve the mystery using the video from KCBS as there was no indication that NORAD and NORTHCOM were able to detect it independently....""Pentagon Has 'No Clue' Who Launched SoCal Missile"
News | Breaking, NBC San Diego (November 9, 2010)

"Someone launched a missile near Los Angeles Monday night and as of Tuesday morning, the Pentagon still doesn't know who.

"A local television station showed video of the launch spotted around 5 p.m. captured by a traffic helicopter around sunset. The location was reported to be west of Los Angeles, north of Catalina Island and approximately 35 miles out to sea, KFMB reported.

"It does appear a substantial missile was launched into the skies over Southern California Monday evening but no one in the military is owning up to it yet, according to NBC Pentagon correspondent Jim Miklaszewski...."

Time to Panic? Probably Not

I suppose I could emulate red-white-and-blue-blooded 'real' Americans, go into full panic mode and start ranting about how people I don't agree with are to blame for letting the commies wipe motherhood, apple pie and America from the face of the earth.

Or, if my point of view was closer to that of America's current dominant culture, I could rant about how this is what happens when people don't believe in global warming, won't recognize a person's right to marry his pillow, and aren't afraid of acid rain. Wait a minute. Acid rain's sort of démodé by now.

Back to that mystery missile:

My guess - and hope - is that the missile was fired off by a film company that didn't let folks know what they were going to do. Or hoped for the sort of publicity they'll get if this was a private launch. Another strong possibility, in my opinion, is that someone in the American military either didn't file the right paperwork to let the chain of command know what was happening - or pushed the wrong button.

In the latter case, my sympathy is with whoever goofed. Considering how much it'll cost to find out what happened - it isn't the sort of thing that can be called a 'little' mistake.

Or, maybe someone's finding out what happens when a missile is launched within a few dozen miles of one of America's biggest cities.

That's the possibility that's got my attention.