That contrail that hit the news this morning wasn't from a missile launch - it was from a jet. An expert said so.

That makes sense - or is that what They want us to believe?! Or am I one of Them?! I don't mean a giant man-eating ant. You know: one of the Illuminati/Knights Templar/space aliens who 'really' rule the world. Does that 1954 man-eating atomic ants movie still run on television? That's another topic.

If you get the impression that I don't take experts, conspiracy theories, or movies about atomic tests spawning a Godzilla-size ant problem for Los Angeles very seriously - you're right.

Wait a minute! Them showed mega-ants in the drains of Los Angeles. Today's mysterious contrail was sited over the Pacific near Los Angeles - IT ALL FITS TOGETHER!!!!!!!!

I've collected a few photos and news excerpts. The photos have been altered. By me. I used my graphics software to resample them to a width of 400 pixels - so that they'd fit in this blog's format. Apart from that, they're the way they came from KCBS - via two different national news networks. 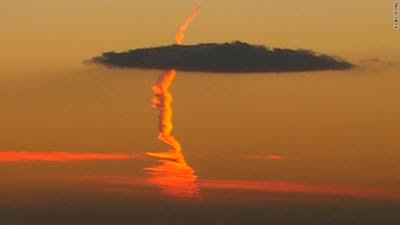 (KCBS/KCAL, via CNN, used w/o permission)
"Video shot by a news helicopter operated by KCBS/KCAL shows a contrail ascending high into the atmosphere" 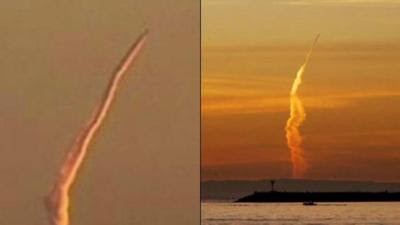 (KCBS, via FOXNews, used w/o permission)
"A mysterious vapor trail caught on camera has the military scrambling for answers -- but is it just a jet? On the left, a still image from KCBS video of the launch. On the right, a very similar event from Dec. 31, 2009 commonly believed to be an airplane."

The captions are from CNN and FOXNews. Excerpts from the articles:

"The Pentagon is unable to explain images of what witnesses took to be a high-altitude rocket launched off the coast of southern California at sunset Monday, officials said.

"But John Pike, a defense expert who is director of GlobalSecurity.org, said he believes he has solved the mystery.

" 'It's clearly an airplane contrail,' Pike said Tuesday afternoon. 'It's an optical illusion that looks like it's going up, whereas in reality it's going towards the camera. The tip of the contrail is moving far too slowly to be a rocket. When it's illuminated by the sunset, you can see hundreds of miles of it ... all the way to the horizon.

Please bear in mind that this is CNN, quoting an expert who's not exactly ecstatic over the fed's handling of this situation.

I think there's little doubt that different news services have different points of view. I do not think that one 'always lies about our Dear Leader' or that another 'is the only one telling The Truth.' Moving on.

"A video that appears to show a missile launch off the coast of California is so far "unexplained" by anyone in the military, a Pentagon spokesman told reporters Tuesday -- but what seems mysterious could be nothing more than an airplane.

"Federal officials do not consider the event a threat. And they aren't the only ones.

"According to a post on ContrailScience.com, the visible exhaust from a jet engine, a trail of condensed water vapor called a contrail, resembles a missile trail when seen from some angles.

"The confusion between a missile launch and a jet plane launch is caused by several common misconceptions, the site notes, explaining that the angle of launch, the direction of flight, and even the shape of the Earth can lead to the illusion. And indeed, when you look at certain images of jet launches, they do look a fair bit like missiles.

"The site's author goes on to note other factors that could connect the unexplained launch to a jet engine. There's no no bright rocket flare, just a few flashes of sunlight, and a sunlit trail. Plus the unexplained craft is incredibly slow, the site notes, while rockets move incredibly fast.

"Meteorologist Kevin Martin of the Southern California Weather Authority is a believer in the airplane theory, too.

" 'We see this often when the flights come at the right time, however, some people are just out to witness it at the right time,' Martin told Examiner.com in Los Angeles. 'We had strong winds up there as well as really cold temperatures from a passing storm system. This also had an area of upper level moisture ... where airliners fly.'

"And a senior military official told Fox News late Tuesday that indications are that the contrail 'was more likely caused by an airplane than anything else because the other possibilities of rockets or missiles are turning up negative.' But officials still aren't 100 percent sure, so the military is taking steps to review its missile inventory and make sure they're all accounted for.

"A similar mystery event took place on Dec. 31, 2009, when a launch in the skies over Orange County mystified people. The Orange Country Register noted a few days later that the event was variously described as a rocket launch or jet contrails. ContrailScience.com argues that both events were simply planes -- seen from an unexpected angle, that is...."

I gave more space to the FOXNews article, because it seemed to me that they gave more interesting details. Much of the CNN article discussed which military people and agencies didn't known what. That's important - particularly for the commanders involved - but doesn't shed much light on the 'what's that contrail' question. In my opinion.

Remember, though: I could be a giant mutant ant in league with the Illuminati and Ron Paul supporters. I'm not: but I'd be hard-pressed to convince someone determined to believe otherwise.

I think Mr. Pike, as quoted in the CNN article, raised an important question:

"...'Why the government is so badly organized that they can't get somebody out there to explain it and make this story go away ... I think that's the real story,'...."
(CNN)

This post isn't, as I've written before, political. Not in the sense that I am committed to saying that one party is stupid and another is smart. I do bring up political matters from time to time, when they relate to the war on terror (which doesn't, officially, exist any more - apparently). (March 30, 2009)

For what it's worth, it's my opinion that the current administration hasn't done anywhere near as badly as I feared might be the case.

So: Do I think that America Is Doomed, or " 'The Army is Unraveling' - Just Like Vietnam!"? No. Not at all.

I also think it's important to draw a distinction between facts and speculation. The facts that we have, so far, is that video was taken of a contrail in the sky west of Los Angeles. Also that the American military hasn't announced a definite, demonstrable explanation for what made the contrail.

Finally, we've got a Federal government which seems - and I stress seems to have done a less-than-ideal job of handling public relations in this matter. That's actually getting very close to being speculation. The 'Federal government screwed up' approach is, I think, more of a value judgment than a fact.

I remember when I could count on seeing a few 'I was abducted by aliens' stories in the grocery checkout each month. At one point, the space aliens seemed inordinately obsessed with giving Earthlings pregnancy tests.

And that's very much another topic. Probably for a blog covering abnormal psychology and/or news media. Or maybe both.

I think this morning's contrail is - in a way - a situation like UFO sightings. It's well to remember that a UFO is an Object that was Flying, and wasn't identified: Unidentified Flying Object. What "UFO" does not mean, outside some fairly specialized literary genres, is "Alien Space Ship From Beyond the Stars" or "Flying Saucer."

So far, it looks like whatever made that contrail is (literally) a UFO. Thank goodness nobody picked up on that, or we'd be knee-deep in space alien stories. Or maybe that sort of thing has gone out of fashion.

Or, maybe that's the angle that editors will take with the next wave of stories on this incident.

Particularly if tomorrow is a slow news day.

For the sake of clarity: I do not think that giant mutant ants, space aliens, or the government are trying to cover up something.

This contrail could, I suppose, be part of somebody's nefarious plot. Or, it could be the contrail of a jet - seen from a dramatic angle.