There's common-sense security, and there's what Americans have to deal with from time to time. Like deciding whether they'd rather be subjected to debatably-safe X-ray screening, or get groped. (Apathetic Lemming of the North (November 13, 2010)) My guess is that the TSA would rather have what their new thing called a "pat down." They probably also wish that the Masses wouldn't fuss so much.

After all - getting their groins checked is 'for their own good.' (Aww, come on: you know you'll like it?)

Maybe there is a reason for the, ah, "pat-down" checks. Maybe.

Or maybe this is another instance of the sort of lunacy that comes up from time to time, when TSA and other government agencies forget that their subjects have cell phones - and aren't afraid to use them.

Not that Americans have as much trouble with crazies in government as, say, Iran does. ("Journalism in the Information Age, Or Nothing Says 'No' Like a Brightly Burning Motorcycle" (June 24, 2009))

So, yes: It could be worse.

I have some sympathy with competent, well-intentioned folks in the TSA and other organizations, who presumably are trying to keep air travelers safe in America. They're in a difficult position, caught betweenNipple rings?! As I said about two years ago: "I am not making this up." (March 27, 2008)

Maybe this week's attempted groin grope was an application of 'equal opportunity?' I doubt it: My guess is that what happened in San Diego was just more clueless (mis)use of authority.

"John Tyner won't be pheasant hunting in South Dakota with his father-in-law any time soon.

"Tyner was simultaneously thrown out of San Diego International Airport on Saturday morning for refusing to submit to a security check and threatened with a civil suit and $10,000 fine if he left.

"And he got the whole thing on his cell phone. Well, the audio at least.

"The 31-year-old Oceanside software programmer was supposed to leave from Lindbergh Field on Saturday morning and until a TSA agent directed him toward one of the recently installed full-body scanners, Tyner seemed to be on his way.

"He'd been reading about the scanners and didn't like them for a number of reasons, ranging from health concerns to 'a huge invasion of privacy.' He'd even checked the TSA website which indicated that San Diego did not have the machines, he said in a phone interview Saturday night....

"...He also did something that may seem odd to some, manipulative to others but fortuitous to plenty of others for whom Tyner is becoming something of a folk hero: Tyner turned on his cell phone's video camera and placed it atop the luggage he sent through the x-ray machine....

"He even told the guard, 'You touch my junk and I'm going to have you arrested.'...

Okay: maybe this air traveler was "asking for it." Maybe.

Leaving the cell phone camera on might suggest that Mr. Tyner was trying to provoke an incident. On the other hand - demanding $10,000 or a free grope? That seems - just a trifle unreasonable, given the information I've seen.

My son-in-law does quite a bit of traveling for his business: and bought an RV this week. We'd discussed the pros and cons before the purchase. He'll be spending a bit more time going from one place to another, but will be spending a great deal less money doing it.

Not everybody travels enough to justify buying an RV. On the other hand, in another blog I suggested that families might consider buying webcams and webconferencing for the holidays, as an alternative to being, ah, "searched" at the airports. (Apathetic Lemming of the North (November 13, 2010)

I can't say that I'd recommend this. Remember: I live in central Minnesota, and there are very practical reasons for wearing clothing here during the winter. On the other hand, Mr. Tyner's response to the TSA's "pat down" reminded me of this discussion of a really old science fiction magazine cover: 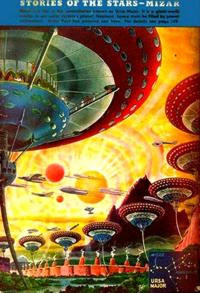 A few more outbreaks of bureaucratic nitwittery from the TSA, and Mr. Zondy's Mizaran scenario might start looking good to America's air travelers.

Here's an excerpt from what I wrote about this get-zapped-or-get-groped nonsense, in another blog:

There's Common-Sense Security: And There's Moonbat-Crazy Stuff Like This

"That said, I've opined about the TSA, security, and common sense in another blog. Before someone has a stroke, let the Lemming point out that, in the Lemming's opinion, the safety of the flying public is one thing - the sort of weirdness I've discussed is something else:"Like the fellow said, 'you can't make this stuff up, folks.'..."

"...As for the airlines and the TSA? Like I said: the Lemming doesn't envy folks in the TSA who are trying to do their jobs. As for airlines and everyone else who makes a living flying other folks from on place to another? I've been laid off, fired, let go, and lost jobs in a few other ways. I hope that the TSA and the air travel industry work out some way for folks to fly without risking their health - or getting groped."
(Apathetic Lemming of the North (November 13, 2010))

I have a feeling that two sentences may have become one at some point: "the TSA would rather have what their new thing called"