Iran's trying people who didn't think the recent presidential election over there was quite on the up-and-up. Obviously, since good Iranians would never consider waging war against God, or disputing the election results - same thing - protests must be the result of outside agitators.

And, sure enough: there's an outside agitator or two being tried. 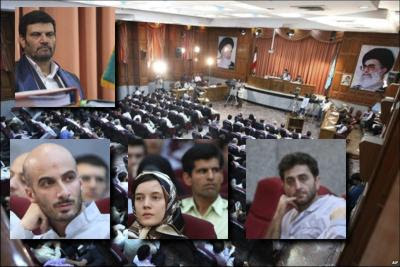 (from Fars, via BBC, used w/o permission: collage by Brian Gill)

The United Kingdom's government has called the trial of one of its embassy staff an "outrage." (Reuters) I'm not all that convinced, myself, that objecting to an election which was probably rigged - and clumsily, at that - is quite the same as waging war on the Almighty. I'm not even convinced that it's a criminal offense.

But then, I grew up in America: the land of the free.

I've said this before: This blog isn't a 'political' blog. I'm not a partisan for any political party. I do, however, care what happens in America, and other countries: if I didn't, I wouldn't be spending time, writing this.

I'm not at all happy about what's happening in Iran. Not just because some Europeans have been swept up in what looks like a sort of combination purge and demonstration of power. Iran isn't just the Ayatollahs and their followers. There are a great many people there, with a culture and history that go back thousands of years. (June 26, 2009)

I'm inclined to agree with an op-ed in The New York Times that called what's going on a "show trial." (NTY)

I'm also not at all happy about what's happening in America. We're nowhere near being in the pickle that Iranians are in: but some of the news this year has been more than a trifle disquieting.

It's been a while, happily, since Homeland Security or a government-sponsored think tank has defined a group or groups of Americans who don't hold the right (or left) views as potential terrorists.

The matter of outside agitators being blamed for opposition to our leaders' policies, on the other hand, came up just this week. Meetings intended to educate people about health care reform, and see what people think of the soon-to-be-established programs, didn't go over quite as expected.

"...'The insurance industry and … Republican activists are manufacturing a lot of these phony protests,' said [United States Representative (D-Tampa) Kathy] Castor, who has been closely involved in the health care debate and said she won't support any bill lacking a government-run insurance option...."

"... Thursday's forum/near riot was sponsored by state Rep. Betty Reed, D-Tampa, and the Service Employees International Union, who apparently had hoped to hold something of a pep rally for President Barack Obama's health care reform proposal.

"Instead, hundreds of vocal critics turned out, many of them saying they had been spurred on through the Tampa 912 activist group promoted by conservative radio and television personality Glenn Beck. Others had received e-mails from the Hillsborough Republican Party that urged people to speak out against the plan and offered talking points...."
(St. Petersburg Times)

That reminded me of the 'outside agitators' who didn't have the correct views about the President's appearance at Notre Dame University (May 17, 2009) This time around, at least one top American leader seems to be concerned about subversive elements infiltrating our national debate.

"...House Speaker Nancy Pelosi suggested that the protests at these events were illegitimate, in part because the protesters were carrying signs with 'swastikas and symbols like that to a town meeting on health care.'..."
(WSJ)

I'd like to believe that America is a thoroughly nice place, where nobody ever was put on a blacklist, and people who don't look right, or don't think right, weren't locked away for the good of the nation. That would be nice, but there have been rough patches in America's history.

I sincerely hope we're not coming up on one now.