Nine people, traveling together, got on an airliner in Washington, D.C., and discussed safety. Then they were ordered off the plane, along with everybody else. The other passengers were re-screened, and continued to Orlando, Florida.

Kashif and Atif Irfan, their families and friend, didn't. The airline, Airtran Airways, wouldn't let them book another flight. There was an obvious reason.

The FBI cleared them, no problem. It was obvious that the nine people were an anesthesiologist and a lawyer, brothers, their families, and a friend.

That wasn't good enough for Airtran Airways. Airtran wouldn't let the Irfans and their friend book another flight to Orlando. Kashif, Atif, and all, eventually arranged transportation through a less exclusive carrier: US Airways.

The FBI, the Irfan Party, and Airtran: Common Sense and Full-Bore Bias

What seems to have started the ball rolling was some of the Irfans talking about safety. As a Washington paper put it:

"Kashif Irfan, one of the removed passengers, said the incident began about 1 p.m. after his brother, Atif, and his brother's wife wondered aloud about the safest place to sit on an airplane.

" 'My brother and his wife were discussing some aspect of airport security,' Irfan said. 'The only thing my brother said was, "Wow, the jets are right next to my window." I think they were remarking about safety.' "

Somebody heard that, apparently thought it was "suspicious activity, and made a report.

Then the Irfan party was interviewed, and all the other passenger re-screened.

Aside from the annoyance and frustration, I don't see all that much of a problem up to this point. It does look like someone on the plane over-reacted, but the Threat Advisory Level was probably still "High," and "suspicious activity" is supposed to be reported. 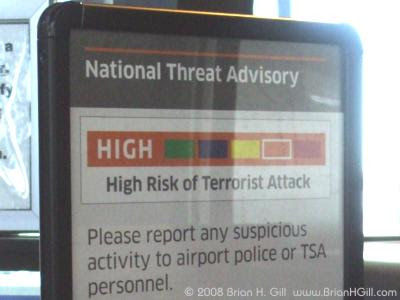 After the fact, we know that the Irfan's conversation was innocuous, but whoever heard it might not have been eavesdropping hard enough to tell. And, here in the real world, people do have a marked lack of enthusiasm for finding themselves soaring above the clouds, with pieces of airplane around them.

The FBI agents found that a concerned passenger had inconvenienced a doctor, a lawyer, their families, and a friend - and a planeload of other people.

So far, it's the sort of annoyance I ran into several years ago, flying to Atlanta. My daughter and I were given very personal, individual, attention - on both legs of the trip.

Getting cleared by the FBI wasn't good enough for Airtran Airways. Airtran wouldn't book the Irfans and their friend on another flight to Orlando.

If Airtran doesn't have a company policy of bigotry and a bias against non-Yankees, they're doing a good job of acting the part.

I don't always see eye-to-eye with CAIR, to put it mildly. This time, however, it looks like they've got a legitimate gripe. An Orlando television station carried CAIR's remarkably low-key statement - plus contact information (MyFox Orlando).

It might not be a company-wide policy: Some nincompoop at the Airtran Airways desk in Washington, D.C., may have simply had a snit over a flight getting delayed. Or maybe didn't like men with beards; or 'foreigners;' or women who don't wear correctly-revealing clothing.

Airtran's refusal of service is more than a matter of seriously inconveniencing and offending two families, and making an American air carrier look like the heavies from some 'relevant' seventies drama.

As I've said before, there's a war on. Quite a number of people are convinced that their god wants them to kill people: Americans, among others. By and large, their would-be victims would rather not be blown up or beheaded.

Not all terrorists, however, have beards and big noses.

And - this is very important - not all people with big noses and beards are terrorists. The same goes for women who don't wear mini-skirts and who do wear shawls.

If I lost a lot of weight and spent some time in the sun, I'd look a little like the man in that photo. And if I traveled on the same plane with you, the biggest risk I'd pose was the possibility that I'd engage you in conversation: I like to talk.

I hope that Airtran Airways reviews its policies, and decides to be a bit less exclusive: and that SNAFUs like this remain a comparatively rare event.

Wrapping this post up, I see these as the main points: Airtran Airways' incredible behavior isn't just a matter of 'civil rights.' There are very real threats to the safety of travelers, and making sensible precautions look like nonsense doesn't help anyone, except the terrorists.