News coverage of Iraq's election - largely free of violence - certainly is a change from the tone of most news from Iraq. Some of it's because there has been real improvement in that country: but I can't help wondering if January 20, 2009, having passed has something to do with it.

From what I've read, it took tight security: but Iraqis got to the polls - and weren't killed. That's an improvement over Iraq's first free election in fifty years, following Saddam Hussein's defeat. 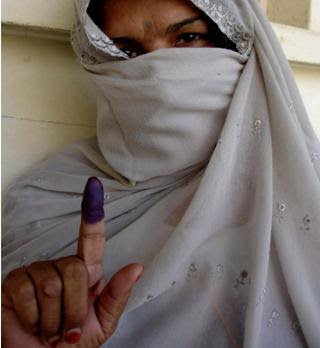 (CENTCOM Photo, from "On Point II," page 421, used w/o permission)
"Figure 106. Iraqi woman voter."
As I wrote the other day, Iraq isn't going to be a western democracy. Or a "western" anything else. But it looks like it's well on its way to being a stable country. And, considering the people and natural resources, I think it'll be a prosperous one. I hope so.

More-or-less related posts: In the news:

Muslims Against Sharia congratulate The Investigative Project on making this possible!

Muslims Against Sharia's comment appears to refer to "FBI, CAIR, and Hamas - This is Interesting, but Not News" (January 30, 2009).

BETTER
"It´s better to be tried by twelve
Than carried off by six,
All ethical remorse to shelve
For which there is no fix--

It was an accident perforce
But this is bloody war,
And violence proceeds on course
For that´s what we are for.

It is not the securement of
Some high idyllic vision,
For peace and brotherhood and love
Are not part of our mission.

If startled, if confused, however
These innocents go down,
As part and parcel to endeavor
As soldiers aye have known."

I don't remember getting a response in verse before.

Responding to what I think you were saying: War isn't nice. But, sometimes the alternative isn't nice, either. And, freeing people from someone like Saddam Hussein isn't necessarily naughty.

If I missed your point, sorry: I'm a bit rushed this afternoon.