After making sure that politicos and journalists from around the world were watching, North Korea's regime blew up the Yongbyon reactor's cooling tower. Whatever condition the reactor is in, it won't be used. Those things generate a lot of heat, and now the radiator's busted.

And, North Korea has said that they extracted plutonium to be used in nuclear weapons. Maybe around 110 pounds. That doesn't sound like much, but it's enough for 10 nuclear bombs: assuming that each has 5 kilograms of plutonium. That's enough for something shy of the 20 kiloton explosion (like the Trinity test, in 1945): if I did my math right. It's not as powerful as the bomb that devastated Nagasaki, but it's a serious weapon. 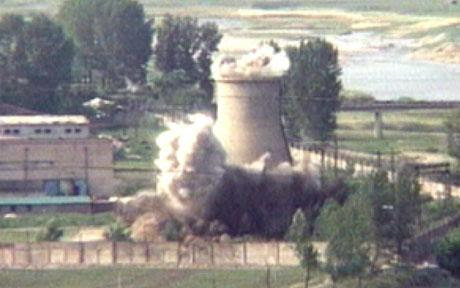 (from Telegraph.co.uk, used w/o permission)

There's a diversity of opinion on just what North Korea's media event means, including: I'm inclined to agree with Lee: today's implosion even made a great show, but probably has little practical effect on North Korea's nuclear weapons program.

On the other hand, blowing up that tower has done more good than boost ratings for some news networks. Is this news event an epochal event, heralding the dawn of a new age? Hardly.

I think that it's mildly hopeful, and may have positive results, down the road.