Yesterday's news told that Israel had conducted a large-scale exercise that might, or might not, be a practice run for attacking Iran's nuclear facilities.

Today's news says that the International Atomic Energy Agency head, Mohamed ElBaradei, is concerned about an attack on Iran. He colorfully compared the results in the Middle East to a "ball of fire."

And it would make Iran mad, too, he added.

I'd be surprised if someone hasn't already written or implied that leaving military action as an option is dangerous. It would be much wiser, (some) conventional wisdom has it, to assure the leaders of Iran, North Korea, and similar nations that under no circumstances would they be attacked.

It would make them feel better, you see. And that would let them calm down and be nice.

I think that deliberate, reasoned, diplomacy is a good idea. There should be an effort made to settle differences amicably, or at least peacefully. I also think that diplomacy which explicitly rejects military action as a starting point is not always a good idea.

Maybe I've studied too much history. I doubt that sort of diplomatic approach would have worked very well with Atilla the Hun. My Viking ancestors probably wouldn't have paid much attention to 'wisdom' like that either. In fact, I'm pretty sure that they wouldn't.

I don't think that human beings have changed all that much since the days when Leif Erickson was exiled from Iceland for unnecessary roughness.

There are still people around, in leadership positions, who don't play well with others, and have sublimated anger management issues. Stopping people who wanted control of other countries, and didn't mind killing people to get what they wanted, occupied quite a bit of the twentieth century. Much of the rest of the past century was spent, cleaning up the mess that followed.

Leaders who want what they want, and won't stop until they get it or are dead, present a problem to what I'll call parlor diplomacy.

Parlor diplomacy is the opposite of cowboy diplomacy. Parlor diplomacy is cautious, gentle, understanding, and above all peaceful. The idea behind parlor diplomacy is that deep down inside everybody is nice, and reasonable. All that is necessary to achieve a mutually acceptable settlement is to assure the other party that there is no danger whatsoever of military action, and everything will go smoothly.

To illustrate how parlor diplomacy works, I offer a hypothetical situation. The United States and a selection of other nations are dealing with Kraggothia. Kraggothia used to have another name, but when Kraggoth the Merciless took over, he re-named it.

Kraggothia has been building nuclear reactors, and has a missile development program which alarmists claim puts much of Europe and Africa in danger. These same alarmists claim that Kraggothia's reactors and centrifuges are intended to develop nuclear weapons.

It's possible: Kraggoth has gone to considerable expense to build his nuclear facilities underground.

Here's a flow chart, showing how parlor diplomacy works in a situation like this, to maintain peace through reason. 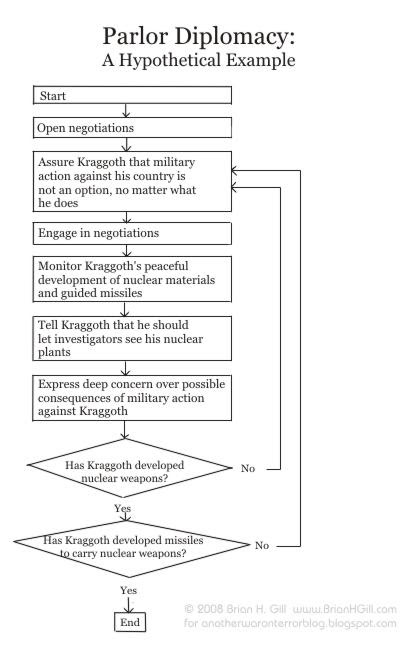 Looks good on paper, doesn't it? The top half, anyway.

Correction (June 22, 2008): I'd keyed in "Iraq" once, where I meant "Iran." Embarrassing. So, if you thought you'd read that I said that ElBaradei is concerned about an attack on Iraq, you were right.

Israel HAS nukes. They have them for a reason.Therefore UNLESS they are willing to dismantle them, their neighbours will try to make their own in self defence. Its simple logic. Fuck Israel and the USA if they are unwilling to deal with that fact.Don't want the threat? Get rid of YOU OWN arsenal, frigging hypocrites!Its simple logic.

A not-so-subtle distinction between Israel and Iran is that the Israeli leadership has not popularized a phrase like "death to Israel! Death to the great Satan America!"

I recognize the need for defense. However, I don't see Israel - or the 'great Satan America' as the problem here.

Laying the blame at the feet of the Jewish nation makes sense - assuming that there are no aggressive regimes in the world, with the exception of Israel and America.

Let's review the facts here: Iran has NEVER attacked a country in its recent history, as a matter of fact, the only war it has fought, was a coupe that toppled its own corrupt leader (The Shah), who was installed by the west in the 50's in the first place!

Israel, on the other hand, has attacked Syria, Lebanon, and Egypt, not to mention the daily incursions into Palestinian lands and the ongoing settlements built illegally by Israel in the West back and Gaza, and the fact that several high ranking Israeli officials have admitted to having Nuclear weapons!

So I find it an incredibly WEAK argument to ignore all these facts and focus on what one irrelevant and deeply unpopular Iranian President said! The fact is Iran will never attack Israel, not only because it has no reason to other than its criticism of Israel's handling of the Palestinians, and because it knows it will be fighting a war it cannot possibly win against the US, not just Israel. It took Iran a long time to get rid of US influence, they will NOT be willing to go through that again.

That is of course not to say that the regime that took over after the Shah was not a mistake that most Iranians wish they could reverse! They are now more confined and oppressed than they were under the Shah, but we all know how US and Israel fight wars: With bombs falling over innocent civilians rooftops! That is how the US is losing the war in Iraq now, they attacked the very same people whom they were trying to "Liberate". So in the end, its the people who suffer, once again!

Yup. I have met many Iranians and they were all very nice and well educated.If the USA/Israel attacks Iran (with the unavoidable civilian deaths) the USA/Israel will be finished in the court of world opinion and I will not care at that point if either get payback.

Lets not forget China. China could easily bleed the US dry economically if they mess with Iran, which is an ally with China.China will crush the USA as a result. What do you think the 50 year plan is for? The USA/Israel must be very careful here or they are toast.China will not stand for any attack on Iran and the USA isnt as powerful as they like to think.

For what it's worth, one of my most valued acquaintances in college was from Iran. I sincerely hope that he and his family survived the regime change.

I'm quite familiar with the Israel-the-aggressor model. I don't necessarily agree, but it's impossible to miss that set of assumptions.

As for Iran never attacking another country:

The Iran-Iraq war was started by Iraq - although an Iraqi chauvinist might blame Iran, based on something in a history of disputes going back to the days of Sumer.

Iranian arms going into Iraq can be explained. It:

I don't see any country as being above criticism.

And, I sincerely hope that talk, inspection teams, and time, will settle the question of what Iran is doing with its nuclear program peacefully.

Finally, I've written a couple of posts about assumptions: links are in "Who Knew? Assertions and Assumptions from All Over." It's not a central topic for this blog, but I'll be adding more posts as time and opportunity allow.