Burma / Myanmar / Myanma - Between Cyclones and Juntas, We Can't Ignore This

Whether you call it Burma, or Myanmar, or Myanma, people living in that country between India and Thailand are not having a good time right now. 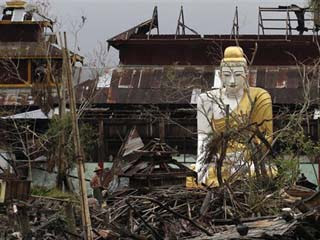 Photo from AP, via Fox News, used w/o permission

Around 100,000 people were killed there by cyclone Nagris a few days ago.

If something isn't done about the lack of food, drinkable water, and medical supplies - and the presence of dead bodies - 1,500,000 could be dead soon, according to Oxfam1 and the British government. (Guardian (UK) (May 11, 2008))

I've posted about the mess in Myanmar before ("United Nations Refuses Aid to Burma, or Myanmar, or Myanma" (May 9, 2008)). Today, a selection of headlines gives a pretty good idea of what's happening:

Cyclone Nagris, the SPDC, and the War on Terror:
We Can't Ignore People in Trouble

The "We" here may be taken as Americans, or, my preference, anyone who believes that people should not have to put up with tyrants. 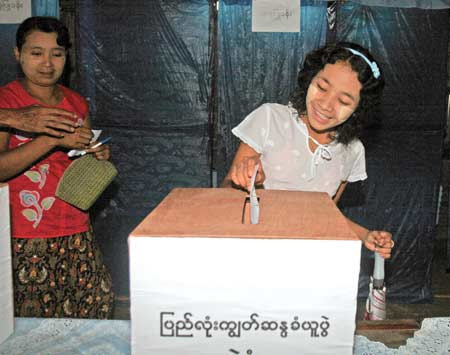 Everybody seems to want "democracy" these days, and the military junta running Burma / Myanmar is no exception. See the smiling people in that photo? We're told that they were participating in yesterday's election in Myanmar. And, in their position, with their sort of leaders, with a camera pointed at me, I'd probably smile, too.

The people there elected members for the People's Assembly or Pyithu Hluttaw:Chairman of the State Peace and Development Council (SPDC) Senior Geneneral Than Shwe and the rest of the junta hasn't let the People's Assembly convene yet, but they say they'll have another election for membership in 2010.

Burma / Myanmar has been getting along without a constitution. The junta suspended the old one in 1974. However, a national convention got together in 1988 to set up principles for drafting a new constitution. That convention didn't include representatives from major democratic or ethnic majority (not a typo: majority) groups.

The junta's constitutional drafting committee started work on a new and improved constitution in December, 2007.

Yesterday, people in Burma / Myanmar voted on the junta's new constitution. "Widespread rumors say the results have already been fixed to deliver an 84.6 percent vote in favor of the constitution." (CNN). I wasn't terribly surprised to read that "witnesses and local officials who watched the local counting of votes Saturday say the vote appeared to average 80 percent to 90 percent in favor of the draft charter." (The China Post)

The constitution that appears headed for a landslide victory "guarantees 25 percent of parliamentary seats to the military and allows the president to hand over all power to the military in a state of emergency." (CNN)

Perhaps I'm being too pessimistic, but my guess is that an "emergency" will happen a few days to a month after the 2010 elections.

Cyclone Nagris and the State Peace and Development Council don't make much of a difference in the small central Minnesota town that I call home. Not directly, anyway.

That vote may not have been "fixed:" not post-poll, anyway. The powers that be in Burma have seen to it that their subjects have a clear understanding of what's at stake. I agree with the poet: "No man is an island...."2 Hundreds of thousands of people dying because their rulers are either incompetent, depraved, or distracted is something I can't ignore. "I am involved in mankind". And, sooner or later, ripples from the lands around Pathein and Bago will reach my home, here by the Sauk River.

Right now, hundreds of thousands of people desperately need food, drinking water, medical supplies and clothing. Many will die if they don't get it.

Their need for assistance, in my opinion, outweighs the junta's need for maintaining power over their subjects.

Being ruled by tyrants didn't make people in Burma the target of Cyclone Nargis. But now that the storm is over, their government is very much part of their problem. Unhappily, Burma / Myanmar isn't the only country that needs a different sort of leadership.

I suggest that, when considering and debating the merits of military force, these ideas should be kept in mind: The point I'm making is that sometimes being involved in military action isn't the worst thing that can happen to people.

Donations for Burma / Myanmar Relief Being Taken:
Some of this Lot Might Help

Lists of agencies that accept donations, and might help people in Burma, have been published on Both news outlets got their information from InterAction, "the largest coalition of U.S.-based international nongovernmental organizations (NGOs) focused on the world’s poor and most vulnerable people."

1 ("Oxfam International is a confederation of 13 organizations working together with over 3,000 partners in more than 100 countries to find lasting solutions to poverty and injustice.")

2"No man is an island, entire of itself; every man is a piece of the continent, a part of the main. If a clod be washed away by the sea, Europe is the less, as well as if a promontory were, as well as if a manor of thy friend's or of thine own were: any man's death diminishes me, because I am involved in mankind, and therefore never send to know for whom the bells tolls; it tolls for thee."
excerpt from Devotions Upon Emergent Occasions: XVII. MEDITATION, John Donne (Project Gutenberg ebook)