I've read that the Pakistani Taliban says it's responsible for the dud bomb in New York City's Times Square this weekend. And, that police in New York City say there's no evidence to support that claim.

Mind, New York's Finest apparently didn't say that the Pakistani Taliban aren't responsible: just that there's no evidence that they are.

My opinion is that, quite definitely, someone wanted three tanks-worth of propane, and assorted fireworks, to explode near Times Square. Who, and why? Those are both very good questions.

By adopting the biases of one group or another, I could assume that 'obviously' this is the work of:Some of the more shrill of America's 'serious thinkers' notwithstanding, this country's police don't work that way. I think the idea of starting an investigation with evidence and ending in a conclusion is better than the reverse.

A Vietnam Vet is Involved

I remember the "good old days," when it seemed that just about every crime in America was committed by a "Vietnam Veteran." The reporters weren't lying, by the way: but they weren't explaining why this was the case, either. Demographics and the draft were involved. (A Catholic Citizen in America (April 2, 2010))

That was then, this is now: although some folks don't seem to have gotten the memo. ("All Those 'Poor, Uneducated, Minorities Being Drafted in America!' " (January 4, 2009))

Given my all-too-clear memories of "the good old days," I was very pleased to hear that a Vietnam vet was involved in this weekend's bomb incident. Keep reading:

The street vendor who spotted the smoking vehicle investigated, and reported to a mounted New York City police officer. Then "...he and two impact police officers on patrol in the area began to clear pedestrians from the vicinity while calling for assistance...." (Ray Kelly, NYPD Commissioner, via newsstoryoftheday)

Here's part of what the BBC had to say about the discovery of the smoking SUV:

"...Police acted on a tip-off from a street vendor - a Vietnam War veteran, who saw smoke coming from the SUV parked on 45th Street and Seventh Avenue at about 1830 (2230 GMT) on Saturday.

"The vehicle had its engine running and hazard lights flashing, officials said.

"Duane Jackson, a 58-year-old handbag vendor, said he had spotted the car parked illegally and when he examined it he saw keys in the ignition with about 20 keys on a ring...."
(BBC)

I'd recommend reading that BBC article, linked below, "In the news." I'll pull out a few highlights. Investigators areThe BBC article included this map of the Times Square area: 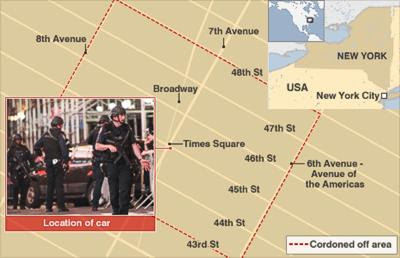 (From BBC, used w/o permission)

I Hope Congress Doesn't Get Involved

I suppose it's inevitable that some member of Congress will want to 'do something' about this investigation. We might even get a full-blown Congressional investigation panel out of it.

I rather hope not. Right now, competent professionals are working their way through an enormous amount of evidence: and I don't think that getting dragged to Washington and asked occasionally-sensible questions is going to help speed up the process.

Don't get me wrong: I think that many members of Congress are well-meaning. But I remember the aftermath of the Oklahoma City bombing of the Murrah building. That truck bomb involved an exotic-sounding chemical, ammonium nitrate. Some of America's leaders got the bright idea that we'd all be safer if this dangerous stuff was banned.

By the same token, we'd all be safer if electricity was banned. That stuff's dangerous!

So is ammonium nitrate. Global Security has a pretty good writeup on that substance: "Explosives - ANFO (Ammonium Nitrate - Fuel Oil)." Then there's anhydrous ammonia. It doesn't have to explode to kill. Farmers and folks in agribusiness follow specific procedures when handling that stuff. The U.S. Environmental Protection Agency has a pretty good definition of anhydrous ammonia, on their "Ag 101" page.

Happily, someone intervened - and Congress didn't cripple American agribusiness. For which I'm grateful.

This time around, I suppose we could get a nationwide ban of SUVs, propane (say goodbye to back yard grilling, unless you burn wood or charcoal), fireworks: or, if someone on Capitol Hill gets really inspired, clocks. And electricity: remember those wires? That bomb used electricity!!

"They say propane tanks, fireworks and a timing device were removed from a parked SUV.

"Part of the area has been cleared of pedestrians and blocked off.

" 'We are very lucky,' Mr Bloomberg told reporters. "We avoided what could have been a very deadly event.'

"The security alert was triggered when a street vendor saw smoke coming from a black Nissan Pathfinder parked on 45th Street and Seventh Avenue at about 1830 (2230 GMT) on Saturday.

"Correspondents say New York City police are on constant alert after a series of alleged terror plots in the wake of 9/11 attacks.

"Police shut down several blocks of New York's busiest tourist attractions, as well as subway lines, while a robotic arm broke windows of the vehicle.

" 'There were explosive elements, including powder, gasoline, propane and some kind of electrical wires attached to a clock," police spokesman Paul Browne told reporters early on Sunday.

" 'No motive has been identified,' he added.

"Mr Browne also said officers were investigating a report that someone had been seen running and they are reviewing security videotapes.

"The car's plates do not match the registration, he said.

"FBI agents have joined NYPD investigators at the scene.

"The White House said President Obama was being kept up to date on the investigation.

"The most recent terror alert in New York City involved a plot to set off suicide bombs in the subway system.

"Earlier this year an Afghan immigrant, Najibullah Zazi, and an associate, Zarein Ahmedzay, both pleaded guilty in connection with the attempt."
bbc.co.uk