"Police: News reports may have spurred Times Square suspect to flee"
CNN (May 11, 2010)

"...Shahzad had boarded a plane that was minutes away from takeoff when authorities arrived to arrest him.

"Kelly said the leaks were part of what he believes is an 'inordinate amount of information given out by somebody' in the case, despite the fact that the investigation is ongoing.

"He declined to answer questions about Shahzad's alleged ties to the Pakistani Taliban, a connection that's been mentioned previously by Attorney General Eric Holder.

"However, during a conference for private security executives Tuesday, members of the New York Police Department outlined common threads Shahzad shares with other recent homegrown terror suspects. The main points are that he grew up in a middle class family and is believed to have been radicalized while traveling overseas to a conflict zone.

"Another common thread discussed is that suspects have turned to the internet for religious guidance...."

You think the finger pointing over the British Petroleum Gulf spill is something? Wait until the next successful terrorist attack: when some hotshot reporter tells the perpetrators how to evade security. The reporter could win a Pulitzer Prize for journalistic excellence - but that's a rant for another day.

I think contemporary journalists shouldn't, perhaps, be judged too harshly. They're in the business of collecting information and repackaging it according to their employers' editorial policies. I think it's quite possible that any given reporter and editor might wonder, for a moment, whether publishing information might allow a terrorist to escape - or cost lives. But it looks like that sort of thing isn't as important as 'the people's right to know.' 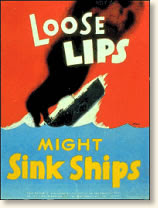 I've gotten the impression that American journalists during WWII had a somewhat firmer grip on who wanted to protect them, and who didn't. That wasn't a 'golden age,' but there does seem to have been a bit more enlightened self-interest floating around then.

Phrases like "loose lips sink ships" - or "...might sink ships" - may sound corny these days: anachronistic reminders of a time when people who wanted to kill Americans were simplistically regarded as "the enemy."

I don't want to go back to the none-too-thinly-veiled racism of some WWII propaganda. On the other hand: is it too much to ask, for journalists to show some common sense: even when some nincompoop in a responsible position doesn't?