American law, civil law, isn't the same as military law. There's a different set of rules: and, as I understand it, a different purpose.

The legal system I live in, again as I understand it, is intended to sort out what's true and what's not in disputes between people, and in situations where someone seems to have been hurt.

Like when there are two bodies on the floor.

That's why police Mirandize suspects, and there are rules about what the defendant in a case can do. Apparently, there are instances where someone isn't allowed to plead guilty.

On the whole, I like American civilian law. That "innocent until proven guilty" business - although it hasn't been perfectly observed - is a refreshing alternative to systems that see things the other way.

Then there are cases like the Arkansas recruiting center shootings.

"A Tennessee man accused in a fatal attack at a military recruiting center in Arkansas has written to the judge in the case, pleading guilty and claiming to have ties to al Qaeda in Yemen, his attorney said.

" 'He did send a letter to the judge, which is highly inappropriate,' Claiborne Ferguson said Thursday from Memphis, Tennessee. 'If my client had the intention of pleading guilty, it is misguided and misinformed as to Arkansas law. He can't plead guilty to a capital crime.'..."

It's anyone's guess what happens next: that mostly depends on the judge.

That "allegedly," by the way, comes from the American 'innocent until proven guilty' thing - and came into common use a few decades back, when someone noticed that news services had a habit of deciding who was guilty and who wasn't, well in advance of court decisions. There was a bit of a fuss, understandably. On the whole, annoying as it is sometimes, I think common use of "allegedly" is a good idea. It reminds us of what's been legally proven, and what hasn't.

Carlos Bledsoe / Abdulhakim Muhammad will have his case heard, and a verdict will be reached. Eventually.

Pleading the Fifth and Al Aqaeda

Abdulhakim Muhammad waived his Miranda rights, and said that he shot the soldiers because he was a good Muslim. Now he says that he's connected with Al Qaeda. (more, in an excerpt at the end of this post)

Like I said before, I like American civilian law. It's civilized - although it hasn't always been applied consistently. And there was that slavery thing. It took a major war to sort that out.

I like the protections for the individual that are built into American civilian law.

I also like to breathe, and would prefer to continue doing so.

Quite a few Americans probably feel the same way.

And, in my opinion, treating suspected terrorists with the same careful deference shown suspects in murder cases isn't helping to keep Americans alive.

The Carlos Bledsoe / Abdulhakim Muhammad case is, in my opinion, skimming the envelope when it comes to what is, and what is not, a matter of national concern.

Only two people were shot in that recruiting office, and one of them lived. Bledsoe / Myhammad may simply be a nut case who thinks he's working for Al Qaeda. Next work it could be Elvis or space aliens.

The problem is, Al Qaeda is real. And it's a threat.

Terrorists, Muggers, and Getting a Grip

An American airliner that landed safely this Christmas wouldn't have, if someone linked to Al Qaeda hadn't botched the job.

Throw in "alleged" and "allegedly" to suit your taste - there really doesn't seem to be much doubt about the general outline of Christmas attack. A whole lot of people could have been killed.

There is, like it or not, a war going on. Al Qaeda, the Taliban, and like-minded outfits are actively - and violently - trying to impose their version of Islam on the rest of the world.

There's a reason for American civilian law allowing people to 'plead the fifth' in trials, and remain silent after they've been arrested.

And, there's a reason that enemy combatants haven't been extended the same privilege.

Think about it. Some fellow was caught with invoices for two tons of ammonium nitrate; floor plans of the South Coast Plaza mall in Costa Mesa, California; and a hand-written letter - in Arabic - telling him to deliver the stuff to "Ali."

And wouldn't say who "Ali" was; if the delivery had been made, and if so, where; or anything else.

As I understand it, Americans have a right to remain silent if they are arrested - and may ask for an attorney. In general, I think that's okay.

Not that 'remaining silent' is my style. The times I've been stopped by the police, I was only too happy to talk: but then, I hadn't done anything illegal. Well, not very. Never mind.

For someone who's held up a convenience store, or mugged someone - I suppose the 'right to remain silent' has a reasonable purpose. Which is another topic, for another blog.

In the case of the hypothetical fellow with the invoice, application of Miranda rights might have unpleasant consequences. 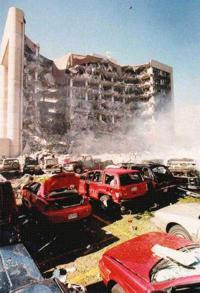 I don't know how much of the South Coast Plaza's 2,700,000 square feet / 251,000 square meters would be affected by tons of the explosives you could make from a ton of ammonium nitrate. Judging from what happened to the Alfred Murrah Federal Building in Oklahoma, though: I think the results would make the evening news. ("Explosives - ANFO (Ammonium Nitrate - Fuel Oil)," GlobalSecurity.org)

Let's say that the fellow with the invoices had, on advice of his lawyer, remained silent. Then, a few weeks later, the South Coast Plaza was subjected to instant urban renewal. With people inside. And, there was good reason to believe that more explosions were planned.

Would the right to remain silent still make sense?

Don't bother asking the folks who were shopping at South Coast Plaza: Many are dead, and the rest might be biased.

Don't get me wrong: I think that protections of my freedom that are built into the American Constitution, and American law, are a good idea. I also think that, in the unlikely event that there was evidence for my having information about a threat to this country: allowing or encouraging me to keep quiet about the threat wouldn't be a good idea. At all.

He claims to be connected with Al Qaeda.

With so many nations involved, I'm not sure who should get first crack at Umar Farouk Abdulmutallab. Offhand, since he tried to take out one of our airliners, I think that American investigators should be allowed to find out what they can from him.

Pretending that Umar Farouk Abdulmutallab is just one more individual who allegedly engaged in illegal activities doesn't, I think, make sense. Particularly since he claims to have connections with Al Qaeda - and there's reason to believe he's right.

Giving him the right to remain silent might make civil rights advocates feel good. But it could allow the next attack to succeed.

I'm about as sure that there will be another attack, as I can be sure about anything:

"...I suppose I should be glad that our representatives in Washington are working hard to protect our rights. But in cases like this, I'm concerned that many of them don't know what's been happening during the last few years ((From Newsmax.com and BBC.)): "I'm no accredited expert in international affairs, but I see a pattern here...."
("Congress Must Decide Who to Protect Americans From," (August 5, 2007))

It would be - nice - if everybody would agree to be nice.

That hasn't happened, apart from a few brief cease-fires, in the last 5,000 years. I don't think it's gonna happen now.

It may not be "nice," by some standards: but I think that investigators should be allowed to ask people questions, if there's reasonable cause to think that they know about plans to kill other people.

"He 'stated that he was a practicing Muslim ... that he was mad at the U.S. military because of what they had done to Muslims in the past,' detective Tommy Hudson wrote in a police report at the time.

"Muhammad told police "he fired several rounds at the soldiers with the intent of killing them," according to Hudson's report.

"In his letter to the judge, Muhammad claimed he had links to al Qaeda in the Arabian Peninsula in Yemen, a group that has claimed responsibility for the attempting bombing of a U.S.-bound airliner on Christmas...."