However, I think it's prudent to remember that Americans aren't the only ones terrorists kill. 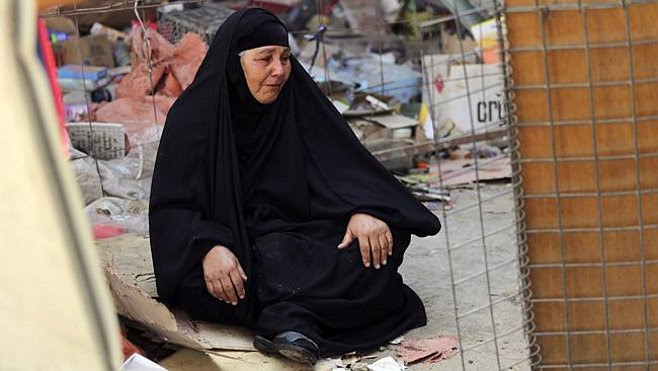 (From AP, via The Australian, used w/o permission.)
(" A woman grieves at the site of the bombing in Khan Beni Saad, about 30km northeast of Baghdad."
The Australian (July 20, 2015))

"The suicide attack by Islamic State, which ripped through a busy market north of Baghdad, came as the country marked Eid ul-Fitr, the feast that ends the Muslim fasting month of Ramadan....

"...Muthanna Saadoun, 25, a ­municipal employee who drives a street sweeper, used his truck to help put out the fires that the blast caused in the market area.

" 'People were burning in their cars because no ambulances or fire engines were able to reach them,' he said yesterday....

"...'What we witnessed yesterday cannot be described. Fire, bodies, wounded, women and children screaming ... Khan is now a disaster zone,' said Salem Abu Moqtada, 34, who sells vegetables in the market....

"...'Every year (during Ramadan) there’s a bombing. We are guilty of being Shia,' Mr Saleh said. 'This is the biggest in Diyala since 2003.'

Another spelling of Khan Beni Saad in my language is Khan Bani Saad.

Either way, the known death toll is about 130 now: 15 of them children. Apparently the attacker drove an ice truck to the market, announced that he was selling ice at a discount because of the Eid al-Fitr holiday, waited for a crowd to gather, and set off the explosion. I suppose the attack was justified — sort of — since there's a claim that the Islamic State of Iraq and the Levant (ISIL) was getting even for the killing of Sunni Muslims in Hawija. (Wikipedia)

I don't see it that way, but I come from a different culture: and have very different beliefs.

Don't expect a rant about 'those Muslims.' If all followers of Islam were this enthusiastic about killing folks who disagreed with them, or had killed someone who shared their particular flavor of Islam — the self-extermination would have been over centuries ago.

There is, I think, hope that folks in the Middle East will learn to restrain their less-reasonable citizens.

Saudi Arabia's government, for example, apparently has decided that arresting folks who plan to kill Saudis is a good idea. That's a start.

In the long run, I think changing the status quo will take a very serious review of what they believe: and hard decisions about what's necessary, and what's causing the bloodshed. Change won't be easy — as my native culture has learned on many occasions. But change happens, and change can be good.

I've said this before: