Egypt, America: Change, Freedom, and Other Threats to the Status Quo

Egypt's president says:
That's a simplified version of what I found in the news.1

Most of the new Egyptian decree sounds okay: being safe is nice; folks seem to like freedom; and democracy is supposed to be a good idea, too. I think part of the trouble folks have is that the president says that nobody can change the new rules, except him.

I can see their point: but not because President Mursi is an "Islamist."

Freedom doesn't, or shouldn't, mean "free to agree with the boss," or "free to support 'proper' opinions." Like I've said before, I remember the trailing edge of McCarthyism, and endured political correctness while doing time in American academia.

Although their vocabulary was different, supporters of both said they were defending freedom. I think they believed it; and probably couldn't understand that another person might disagree without being pinko, homophobic, or whatever.


What 'Everybody Knows, That Just Ain't So'

Today's 'real Americans,' and those who graduated from campus activism to successful career tracks, have an odd sort of common belief: Muslims are evil, or at least dupes of Islam. An oversimplification? Yes: but I think it's good enough for a quick sketch of the attitude toward 'those people.'

What sets today's establishment apart is that all religion is supposed to be dangerous, or at least 'intolerant.'

"The establishment" isn't what it used to be, and that's almost another topic:
As the name of that blog suggests, I'm one of 'those religious people.' Worse, I'm a Catholic: which doesn't mean what you may have heard.

By the way, I discuss political issues, but this isn't a "political" post, and there's a reason why it's hard to pigeonhole my views as liberal or conservative:
I'm getting seriously off-topic. Sort of.


'Kill a Commie for Christ,' and Assumptions 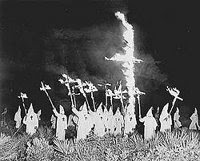 Let's say that the more violent iterations of the Ku Klux Klan were the only sort of 'Christianity' a person heard about. Assuming that folks who 'protected' their America from foreigners, blacks, and other 'anti-Christian' influences, were typical Christians wouldn't be hard.

Equally rabid patriots who inspired the 'kill a commie for Christ' slogan didn't help, in my opinion.

My reaction to ranting radio preachers and their secular counterparts eventually led to my becoming a Catholic, and that's definitely another topic. 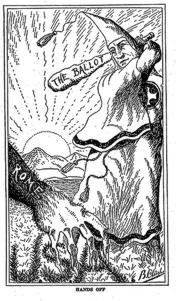 In a way, I'm not half as concerned about foreign threats, as I am about some of the folks determined to 'protect' my country.

These days, I don't see a 'vast right-wing conspiracy' as a serious threat to America's freedom. Too many folks remember various red scares, or were told about them in the government schools. Yet another topic.2

That's another over-simplification. I've written about tolerance, real and imagined, fairly often: and put links under "Tolerance," below.


Egypt and a Changing World

Maybe the Egyptian president really will bring freedom, democracy, and stability, to Egypt: and then let someone else have a say in how his country is managed. I'm dubious about that: but it's possible.

I think it's more likely that Mr. Morsi wants Egypt to be a nice, orderly, "stable" country: like North Korea, Burma/Myanmar; and 20th century Latin American rulers whose title was "president," since American support depended on a show of "democracy." Cynical? Maybe.

I don't mind stability, or freedom. But I think there are different sorts of "stability:"
I realize that change is unsettling, sometimes painful. But change happens, change can be good, and resisting change can create new problems: and even more unsettling, painful change. My opinion.

Getting a grip about:
In the news:
1From the news:

"President Mohammed Mursi has appeared before supporters in Cairo to defend a new decree that grants him sweeping powers.

"He told them he was leading Egypt on a path to 'freedom and democracy' and was the guardian of stability.

"He was speaking as thousands of opponents gathered in Cairo's Tahrir Square and offices of the president's party were attacked in several cities.

"The decree says presidential decisions cannot be revoked by any authority...."
"Egypt's President Expands His Own Powers"
Sam Dagher in Cairo and Jay Solomon in Washington, The Wall Street Journal (November 22, 2012)

"Egyptian President Mohammed Morsi, coming off a heady week of high-stakes diplomacy that thrust his government onto the international stage, pushed to consolidate his power at home with a set of decrees aimed at sidelining a judiciary that has been one of the last institutions challenging the Islamist government.

"The declarations, which appeared to stun the Obama administration, brought into the open a long-simmering confrontation between Mr. Morsi's Islamist government and a judiciary that is populated with many secular-leaning judges appointed by the former regime of Hosni Mubarak.

"U.S. officials on Thursday said there was no indication that Mr. Morsi was going to make this move when Secretary of State Hillary Clinton visited Cairo Wednesday, and the administration widely praised the Egyptian president for brokering the cease-fire between the militant group Hamas and Israel that also involved the U.S. and a host of regional powers. The agreement ended more than a week of Hamas rocket attacks on Israel and repeated bombardment of Gaza by the Israeli military.

"A senior U.S. State Department official said Mr. Morsi's actions 'have raised some concerns' and that officials are watching the developments closely....

"...The set of decrees exempt the president's decisions from all judicial review and bars the courts from dissolving a constitutional-drafting committee that has increasingly come under the sway of Mr. Morsi's allies in the Muslim Brotherhood.

"Several prominent Egyptian liberal political leaders, including some who ran in this year's presidential election, met in Cairo on Thursday, with most expressing their shock at Mr. Morsi's moves.

" 'Morsi today usurped all state powers and appointed himself Egypt's new pharaoh. A major blow to the revolution that could have dire consequences,' wrote Mohammed ElBaradei, a former candidate and former head of the International Atomic Energy Agency, on his official Twitter account.

"The negotiations over Gaza, whose conclusion was announced by Egyptian Foreign Minister Mohammed Kamel Amr with Mrs. Clinton at his side, elicited praise for Egypt's new leader, who came to power this year in the wake of the revolution that overthrew Mr. Mubarak. The Obama administration talked with cautious optimism of teaming up with Mr. Morsi to attempt to make progress on regional issues that have been stalled for decades....

"...U.S. officials have urged Mr. Morsi to pursue changes that include gender and religious rights in Egypt. 'We encourage all parties to work together and we call for Egyptian leaders to resolve these issues through democratic dialogue,' the official said....

"...While the immediate impact of the declarations remains unclear, observers said they could help further strengthen the Muslim Brotherhood's dominance of the constitutional-drafting process and perhaps open the door to retrials of former regime officials and connected businessmen who were found not guilty in corruption trials.

"They insisted that the extraordinary powers bestowed by the decrees will disappear once a new constitution is drafted and goes into effect....

"Yet the declarations also sealed Mr. Morsi's position as the dominant figure over Egypt's transition to a system many hope will be more democratic—and raised new concerns that Mr. Morsi and the Muslim Brotherhood are eliminating all checks on their authority...."


2 Some Americans who home school their kids may be intellectually-challenged sociopaths with strong anti-science beliefs. I think that stereotype is seriously flawed, but what would I know? I'm one of those home-schooling parents: and 'everybody knows' what they're like.

I've harangued about education, science, and religion, a bit in another blog: