The Colonel's name gets spelled Qadhafi, Qaddafi, or Gaddafi: depending on who's deciding how to transliterate his name into the Latin alphabet.

First, the good news:
Now, the bad news:
As I've said before, so much depends on a person's point of view.

Me? I think most Libyans are much better off with the Colonel somewhere else. I also think that Libyans who supported the Colonel stand a much better chance of survival under the new regime, than their counterparts when Qaddafi dealt with opposition the old fashioned way.

I haven't run into the 'bad news' angle yet, and don't necessarily expect to. The Colonel managed to make too many crazy statements, and ticked off too many other national leaders: my opinion. Besides, I suspect that the 'victim of capitalist oppression' thing is starting to wear thin, even in the more isolated subcultures.

The folks who got help running the Colonel out of their country may succeed in working out a way to rebuild Libya. I hope they do. I also think that they've got a huge job on their hands: and won't get it right the first time. The United States Constitution wasn't this country's first attempt, and that's almost another topic.1

Now that they've got an old-school autocrat out, along with at least some of his supporters, Libyans like Libya's interim prime minister Mahmoud Jibril have decades of mismanagement to fix. Plus disagreements about what Libya should be like, now that the Colonel is gone.


Interpol, the International Criminal Court at The Hague, and Getting a Grip

I'm no great fan of the United Nations. Too many of the earnest folks there seem determined to 'protect' us from technology. Considering what happened to the Libyan Colonel, I can see why so many at the U.N. don't want ordinary folks to have easy access to small arms: and that's almost another topic.

I don't hate the U.N., either, or live in fear that foreigners will plant 'spider flag of the United Nations' under the red, white, and blue skies of America.

But my less-than-sunny view of our recent attempt to get a "Parliament of man" keeps me from cheering about the International Court at The Hague asking Interpol to arrest a national leader.

I suspect that Colonel Qadhafi's ouster and arrest warrant have as much to do with his scaring the neighbors and insulting the wrong folks, as it does with what he's actually done. Which doesn't mean that I'd want him back in power.

What I think about international law, the U.N., and Libya's troubles, is determined in large part by my religious beliefs. Which may not mean what you think it does.2

I put excerpts from recent news and views about Libya at the end of this post.3

Related posts:
News and views:
1The Articles of Confederation looked good on paper. More:
2 I take my religious beliefs very seriously. Which doesn't mean what quite a few folks feel it does. No matter what you've read, these are not typical American religious people: 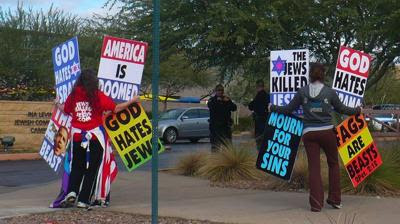 I'm not a 'regular American,' when it comes to belief, either. I'm a practicing Catholic. Which also doesn't mean what you may have read in the papers.

Because I'm a practicing Catholic, and learned what that means, I have to be a good citizen, get involved in public affairs, and think of everybody as people: not 'foreigners,' 'commies,' 'oppressors,' or whatever.

In principle, I have nothing against Tennyson's "Parliament of man, the Federation of the world." I think the United Nations was - and is - a good idea, but it's nowhere near being the sort of 'competent international authority' we may eventually develop:


"We're a very long way from having an "international authority with the necessary competence and power" to simply arrest someone like Saddam Hussein. (Catechism of the Catholic Church, 2308)"
(A Catholic Citizen in America (June 16, 2011))

I'm also no great fan of the United Nations.

Which isn't the same as seeing it as a bunch of foreigners out to 'get' America.

Finally, and off-topic for this blog, as a Catholic I also have the option to learn as much as I can, about how things work: (The Pontifical Academy of Sciences, used w/o permission)

3 Excerpts from news and views:

"As Interpol issued arrest warrants for the fugitive Libyan autocrat Col. Muammar Qaddafi and two others on Friday, reports came from Niger of a new convoy of high-ranking Libyan officials arriving across the desert.

"In Lyon, France, Interpol said in a statement that it had issued so-called red notices calling for the arrests of Colonel Qaddafi, his son, Seif al-Islam, and Abdullah al-Senussi, the head of the former leader's intelligence agency.

"The red notices, which were requested by the International Criminal Court at The Hague for alleged war crimes committed by the three men, require any of Interpol's 188 member nations to arrest the suspects and turn them over to that court.

"Among the member nations is Niger, which borders Libya on the south and has received a number of convoys of loyalist officials fleeing overland. So far, no high-ranking regime figures were confirmed to be accompanying them...."
"Libya conflict: Gaddafi general 'flees to Niger' "
BBC News (September 9, 2011)

"A senior general in Libyan ex-leader Col Muammar Gaddafi's forces has fled to Niger, according to local sources.

"Officials in the Niger town of Agadez named the commander as General Ali Kana, a Tuareg in charge of Col Gaddafi's southern troops.

"Interpol has issued an arrest warrant for Col Gaddafi, his son Saif al-Islam and spy chief Abdullah al-Sanussi, whose whereabouts are still unknown.

The National Transitional Council (NTC) has been trying to negotiate a peaceful resolution to stand-offs in a handful of areas - including Bani Walid, Jufra, Sabha and Col Gaddafi's birthplace of Sirte.

""There are tensions. But no problems."

"That was the neat but rather elusive conclusion of a senior military official here in Tripoli, when I asked him about reports of growing friction between Libya's transitional civil administration - which is moving surprisingly slowly to fill a power vacuum in the capital - and the patchwork of rebel military units - some with hints of a pronounced Islamist agenda - that seized the city from Col Muammar Gaddafi's forces and now seem reluctant to abandon control.

"I put the same question to Mahmoud Jibril, Libya's interim prime minister, who spent much of a rather tetchy news conference in Tripoli begging his countrymen not to squabble and play political games - and accusing unnamed forces of 'jeopardising' stability and of forgetting that the battle against Col Gaddafi's forces was not yet over.

"Earlier, one of his exhausted aides shook his head in wordless despair when I asked him how things were going inside the National Transitional Council.

"But having raised the alarm, Mr Jibril then insisted that the situation was actually fine and that 'dialogue is taking place in a wise fashion' despite the absence of a new constitution to guide them...."
"Libya's Central Bank Will Honour All Bank Agreements"
The Tripoli Post (September 9, 2011)

"Libya's transitional prime minister, Mahmoud Jibril, called for national reconciliation and unity, saying they may be 'more difficult' to achieve than the fight that toppled Muammar Qaddafi's regime.

" 'There are two battles,' Jibril said after arriving in Tripoli two and a half weeks after opposition fighters entered the capital. Achieving unity will be 'our biggest challenge,' he said.

" 'The first battle is against Qaddafi and his regime,' Jibril said at a news conference yesterday. 'This will end by the capturing or the elimination of Qaddafi. However, the battle that is more difficult is against ourselves. How can we achieve reconciliation and achieve peace and security and agree on a constitution? We must not attack each other or push each other away.'

"While Libya has been able to export little oil during the conflict, a 600,000-barrel crude shipment is being offered from the western port of Mellitah, according to three people with direct knowledge of the transaction...."
"Libyan Leaders Face 'Biggest Challenge' Seeking Unity After Qaddafi Ouster"
Chris Stephen and Massoud A. Derhally , Bloomberg (September 8, 2011)

"Libya's central bank, on Thursday sought to reassure 'all foreign partners of Libyan banks who are operating in Libya, the agreements will be honoured.'

"Now under the control of the new leaders, the central bank also said it was having no liquidity issues, thanks to a delivery of bank notes from Britain, and that none of its assets had been stolen.

" 'No assets of the Libyan Central Bank have been stolen, gold or otherwise,' the bank's new governor Gassem Azzoz told reporters in Tripoli, adding that if, as reported, fallen leader Muammar Al Qathafi had taken gold, it was not from central bank coffers.

"Another assurance from the central bank concerns Italy's UniCredit SpA, the first overseas bank to get a licence in Libya, winning permission in August 2010.

"It announced to foreign investors that it would not change the country's stake in UniCredit and will honour banking licences granted by the ousted Al Qathafi regime...."

It makes less sense in context.

The word "ouster" is a noun meaning "a person who ousts or supplants someone else...a wrongful dispossession...the act of ejecting someone or forcing them out." ( http://wordnetweb.princeton.edu/perl/webwn?s=ouster ).

Given the second and third definitions, "ouster" is appropriate in this context - and used by at least one of the resources I sited.

I found and fixed a verb agreement error, which didn't help make the sentence clear.