Historically, China has been the home of a great civilization. For most of America's history, though, China was a place where leaders had trouble with their subjects, famines, and foreign occupation. Then Chairman Mao had a shot (literally, in some cases) at making China another 'workers paradise.'1

Mao and his successors were about as successful, in my opinion, as anybody else at making a system that looks good on paper work in the real world.

More recently, China's leaders have apparently decided that catching up with countries that use market-oriented economies is more important than ideological purity. That, I think, is good news. Particularly for folks living in China.

What doesn't seem to have changed so much is a parochial set of assumptions about China and foreigners.2 In my opinion.

Which brings me to something I read in the news this morning:

Chinese leaders are under the impression that they own the South China Sea, as far south as Brunei. That doesn't include a narrow line of water on the western shores of the Philippines, or a somewhat wider strip off the Vietnamese shore.

Most of the rest of the world - including the United States - recognize national economic boundaries as a strip of ocean 200 nautical miles wide. That boundary was set by the United Nations Conference on the Law of the Sea (UNCLOS). Maybe you heard that the running dog capitalist oppressors hadn't ratified UNCLOS. Ratified, no: recognize, yes.3

Vietnam seems to think it's okay to operate within its UNCLOS boundaries.

Which brings me to something I read this morning:

"Vietnam has said it will hold live-fire exercises in the South China Sea amid escalating tensions with China over disputed waters.

"Vietnam warned vessels to stay out of the area off its central coast when it conducts the drills on Monday.

"It follows a verbal clash with China over sovereignty in the area.

"Beijing said Chinese fishing boats were chased away by armed Vietnamese ships in the incident on Thursday...."

From that point on, the BBC News piece gives detail about what may be a sort of 'he said/she said' snit on an international scale. China claims that one of their poor, helpless fishing boats was cruelly dragged for an hour by the uncaring Vietnamese. Not in quite those terms - but I gather that China's claiming to be the victim here.

I'm no greater fan of Vietnam's current leadership, than I am of China's. Although Vietnam's bosses also seem to have realized that their old-school economic policies simply weren't working.4 And that's another topic.


Vietnam and China in a Snit: So What?

The South China Sea isn't quite as far away from Minnesota as you can get from Minnesota, and still be on Earth - but it's close. In the 'good old days,' I might never have heard of the altercation between Vietnam and China.

This isn't the 'good old days.' And even then it might have made a difference to folks here in central North America. Particularly if the folks running China and Vietnam decide to let what happened grow into a shooting war.

I don't know how likely an armed confrontation is - but I am pretty sure that China's leadership has decided to get China back to the top of the heap in world affairs.

I don't have a problem with China returning to the prosperity and cultural achievements of its past - with upgrades. From my point of view, that means more markets for American producers - and maybe more tourists in Minnesota's lake country.

What I am concerned about is the possibility that China's leaders may not quite realize what century they're at - and that quite a few folks now think it's impolite to march an army into somebody else's territory and say that you've 'liberated' it.

There are some who think getting a little empire to call your own is still okay, of course. And that's yet another topic.5

2 I've discussed what China seems to believe, before:
3 "United States non-ratification of the UNCLOS," Wikipedia (last modified 24 May 2011)

5 Yankee imperialism, real or imagined, still seems to be anathema in American academia. There seems to be a little sympathy for the 'right sort' wanting little empires to call their own, though:
Maps: 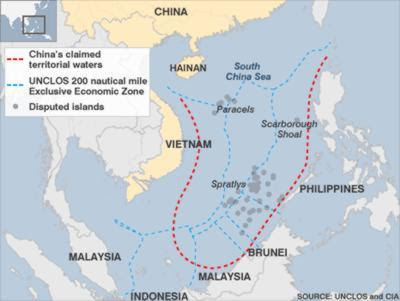 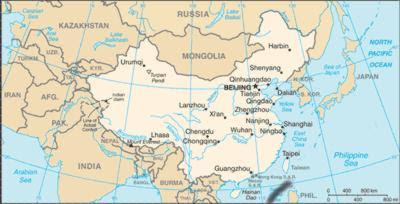 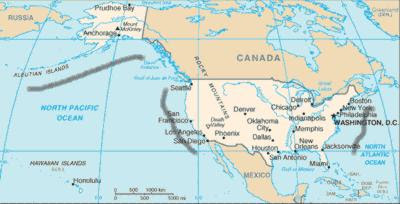 For comparison, I added the approximate UNCLOS boundary to this map of the United States. America is in the happy position of having two of the planet's largest oceans on its two major coasts. The east and west coasts both face other nations: but they're thousands of miles away. 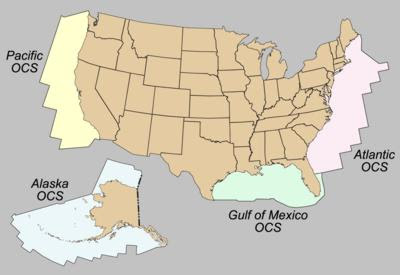 This map is an illustration of another sort of politico-economic boundary involving the United States. It's part of a standard-issue piece on the 'global warming gonna kill us all' theme - but I think the map is a useful illustration for comparing American boundary issues and China's.