I think tolerance is a good idea. As a half-Irish Roman Catholic living in a traditionally Protestant former English colony: I would. It's in my best interests to see to it that the rights, property, and lives of folks who aren't in the majority are safe.

There are also more theoretical grounds for promoting tolerance.

Note, please: In this context, I mean "tolerance" as:

The last time I did time in American academia was in the eighties: so I'm all too aware that "tolerance" can mean a strident support of politically correct views - while shouting down anybody who disagrees. I didn't think that "tolerance" should mean agreeing with the professor then - and I still don't.

Last Sunday, somebody apparently tried to burn down a mosque in Oregon.

That could be used as "proof" that Americans are hate-filled arsonists. Never mind what happened in Tennessee:It looks like, in the Oregon case, the Islamic center/mosque (I've seen it described both ways) wasn't picked randomly:

"Authorities have identified a "person of interest" in the alleged arson of a mosque....

"...The mosque was burned November 28th. Police believe the fire is arson and an act of retaliation for the failed bomb plot during Portland's Christmas Tree Lighting Ceremony...."
(KDRV.com)

This Islamic center probably wasn't chosen randomly. Mohamed Osman Mohamud, the fellow who seems to have had a shot at killing folks at a tree-lighting ceremony (November 27, 2010), attended the Salman Alfarisi Islamic Center.

Mohamed Osam Mohamud is a Somali, a college student, an Oregonian, a Muslim, and a lot younger than I am. As I pointed out at the time, depending on a person's biases, that failed bombing could be 'proof' that you just can't trust:Or, taking my weird and wild eighties experiences as a guide, the bombing attempt might be 'proof' of how you just can't trust those male chauvinist pigs and their authoritarian oppression.

Then there are the space-alien, shape-shifting lizard people: and that's another topic.

Or maybe not so much. I think it's a mistake to start thinking about people as primarily members of a group - not as individuals.

I also think that it is a huge mistake to hate people. Any people. That's not the same as thinking that whatever another person does is okay. I realize this is a rather counter-cultural notion: but I can't help that. I've discussed hate, anger, love, and other aspects of the human experience in another blog. (A Catholic Citizen in America (May 26, 2010))

Back to the matter of a fellow who wanted to kill people at a Christmas tree lighting, and someone else who had a shot at torching the Islamic center the first chap went to.

I'm not a Muslim. I'm part of another religious minority in America. I'd like to think that I'd want to protect the rights, property, and lives of folks who aren't WASPs and/or in the majority even if it weren't in my own best interests. And that is another topic.

Maybe - and this doesn't seem to have been demonstrated - the Salman Al-Farisi Islamic center is an Islamic equivalent of the Westoboro Baptist Church (Topeka). (November 26, 2007)

If someone at the Salman Al-Farisi Islamic center had a hand in the Christmas tree bombing that didn't happen - that's a matter for law enforcement and the courts.

Not a free-lance arsonist.

Remember: I don't hate the Christmas tree bomber, or the arsonist. I also think we'll all be a lot safer if they're confined and under observation somewhere.

"In Corvallis, Oregon, sits the Salman Al-Farisi Islamic center, occasionally attended by Portland's 19-year-old suspect held on charges of attempting a car-bombing, during a recent tree-lighting ceremony. Mohamud was set up in a sting operation, executed by law enforcement investigators.

"Arsonists torch Islamic center because of one mmember.[!]
"According to Yahoo News the mosque where Mohamed Osman Mohamud sometimes attended was the target of a malicious arson. Both attendees and neighbors in the community denounce the act of hatred against an entire church, for the thoughtless actions of just one member...."
(Donald Pennington, Associated Content)

Collecting and analyzing evidence, and interviewing people, may not be as emotionally satisfying as marching down main street with torches, pitchforks, and rope - but a by-the-numbers police investigation has been known to produce results, too.

More reliable ones, in my opinion.

"Police in Oregon are investigating a man who lived near a mosque that was set ablaze days after a worshipper[!] there allegedly planned to blow up a car at a Christmas tree lighting ceremony.

"Authorities this week searched a home near the Salman Alfarisi Islamic Center in Corvallis, confiscated a variety of goods and took DNA swabs from 24-year-old Cody Crawford, who lived at the home with his mother, according to official documents.

"The house was searched Monday, a day after someone tried to burn the center 200 feet away, according to an affidavit. An officer asked Crawford why someone might burn the mosque. 'Because they don't like Muslims,' he's quoted as saying...."
(AP, via FOXNews)"...U.S. Attorney Dwight Holton said late Friday that no arrest has been made in the case.

" 'The investigation is continuing,' Holton said. 'We're firmly committed to figuring out who did this and why, and bringing the perpetrator to justice.'

"The investigation includes whether the arson was linked to the arrest of Mohamed Osman Mohamud, 19, a former Oregon State University student, in an alleged terrorist plot in Portland...."
(The Oregonian, via OregonLive.com) 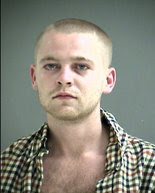 "...Cody Seth Crawford, 24, whose mother’s house at 2014 N.W. Polk Ave. is around the corner from the mosque, was questioned the afternoon of the fire by law enforcement officers canvassing the neighborhood. The information from an affidavit and four search warrants was released on Friday by Benton County District Attorney John Haroldson.

"Haroldson would not comment about why Crawford has been identified as a person of interest — his residence searched and items seized — but Crawford hadn’t been arrested as of Friday night.

"The documents indicated police homed in on Crawford after he identified a small blue flashlight found on a walkway at the Salman Alfarisi Islamic Center at 610 N.W. Kings Blvd. as one that looked like one he claimed was stolen Saturday night, hours before the 2 a.m. Sunday fire was set at the mosque...."
(Gazette-Times)"...Crawford has a criminal past, including accusations of criminal mischief, assault, and spitting food at a deputy while in jail...."
(KDRV.com)

That's a photo of Mr. Crawford. Let's remember that he hasn't been charged - and the investigation may go in another direction. Still, it's possible that he tried to torch that mosque. Islamic center. Whatever.

Which might lead one to say 'that's funny, he doesn't look like a terrorist.' Well, maybe he won't be charged with terrorism. The crime seems to fit in the old 'arson' category.

Either way, though: setting fire to a building that belongs to someone else isn't nice, and we shouldn't do it. Even if we feel like it.

As for Mr. Crawford's appearance - he looks sort of like the late Timothy McVeigh: he's got that same lack of melanin in his skin. Which, given some biases, 'proves' that all white people are arsonists/racists/whatever.

Oh, boy: that was an 'eighties' flashback.

Bottom line in this mess in Oregon?

I'm glad that nobody got hurt or killed - either at the Christmas tree lighting, or at the mosque/Islamic center.

I think it's a good thing that the person who's primarily responsible for the tree bombing has - 'allegedly' as we say - been identified and caught.

I'm also glad that quite a few folks in Corvallis don't, apparently, approve of arson.

And I'm glad that law enforcement seems to be going through a methodical, careful investigation of the arson.

Related posts:More related posts, about getting a grip:News and views:

I thought it was 'freelance:' "Not a free-lance arsonist."

Thank you, for not only an excellent bog post, but also for the link.

Good point - but the AP Stylebook I use as a standard says free-lance - hyphenated.

And the missing word? Fixed. Thanks!

Thank you for the kind words. And the link? My pleasure.