By this time, nine years ago today, what was left of New York City's World Trade Center had been evacuated, a crater was all that was left of Flight 93, and the Pentagon had a hole in one wall.

Today, there's a new World Trade Center going up where the old one was, and one family has learned a little more about someone they lost:

"Judson Box has never known exactly how his son, Gary, died on September 11, 2001. But an unexpected find nine years later has given him a glimpse into his son's final hours.

"Gary, then 35, had been working as a firefighter in Brooklyn for roughly five years when the terrorists attacked. He did not speak to his father the day of the attack and his body was never recovered, leaving the circumstances of his death a mystery.

"On September 11, 2009, Gary's sister, Christine, was visiting the Tribute Center when an employee asked her if she was looking for someone specifically. She mentioned her brother Gary, and the employee showed her to a picture of a firefighter in the Brooklyn Battery Tunnel that had a caption bearing Gary's name.

"But it was not Gary. It was a photo of Brian Bilcher, another member of Gary's fire squad who also perished on 9/11...."

A photo of Gary Box did show up. CNN did a pretty good job of telling part of that family's story. 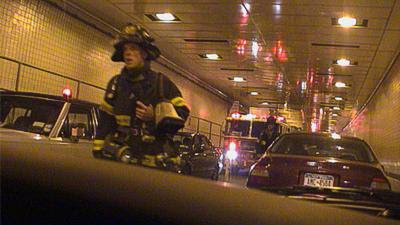 (Erik Troelson, via the National 9/11 Museum & CNN, used w/o permission)
"A Danish businessman took this photo of Gary Box as he rushed toward the attacks on the World Trade Center."