'Everybody Knows' That Americans are Arrogant

Is this help-wanted ad really so surprising? 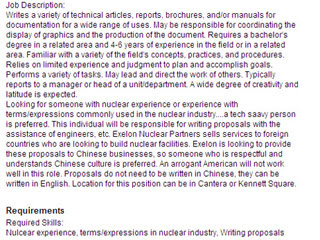 " Looking for a job? Well, if you're an "arrogant American,' you had better search elsewhere.

"An information technology staffing firm based in Rolling Meadows, Ill., posted an advertisement for a technical writer that warned that an 'arrogant American' would not flourish in the position.

" 'Exelon is looking to provide these proposals to Chinese businesses, so someone who is respectful and understands Chinese culture is preferred. An arrogant American will not work well in this role,' the listing read.

"The ad, posted by Viva USA, an information technology consulting firm, has since been removed. Varuna Singh, the company's development manager, told FoxNews.com it received the language from its client, Exelon Nuclear Partners, and the wording somehow got past a 'junior recruiter' who posted the advertisement on CareerBuilder.com...."

Now that they've been caught, the recruiting outfit is taking down the ad. Commendable.

You don't have to believe this, by the way. The story ran on the FOX News website: and 'everybody knows' that FOX News lies. They're arrogant Americans, remember.

America isn't Perfect: But The Anti-American Fad is Seriously Dated

Back in the sixties, being anti-American was kind of now, kind of wow. You know, like, groovy.

Oh, well: I'm an American, myself. And 'everybody knows' what we're like.

How Divisive of an Upstart News Service

I've written about information gatekeepers before. ("What is an Information Gatekeeper?" (August 14, 2009))

And, I'm rather glad that we live in a time when "divisive" news items like this can get published. Even if old-school editors at The New York Times and broadcast networks' news departments don't feel like letting 'the masses' know about items like this.