I've run into assertions like these quite often over the last few years. You probably have, too: I know: There's a bit of redundancy in that list. But you get the idea.

I can see why quite a few people think that those assumptions are true. Sudan and Saudi Arabia, for example, seem to be in a race for first place at displaying Islam as a hopelessly anachronistic cluster of beliefs, run by men with - to be polite about it - weird sexual hangups.

New Law Proposed in Indonesia: A Woman Accused of Adultery Should be Stoned

I've read enough about Islam, and corresponded with enough Muslims and Muslimas, to suspect - quite strongly - that the House of Saud and the bunch running Sudan don't represent all Islam.

Men who think Islam holds men and women to different standards don't just live in and near the Middle East. Here's some political news from Indonesia:

"The law also dismisses a rape victim's claims unless she can provide four male witnesses to the assault."(CNN)

In a way, no surprises here. That's the Islam most westerners see, the version of Sudan and Saudi Arabia, and - to a greater extent - Al Qaeda and the Taliban.

Just on thing. This law went through a provincial parliament in Indonesia. And it's not likely to get implemented.

The law was railroaded through the provincial parliament in Aceh, a semi-autonomous Indonesian province. The lawmakers responsible are the outgoing MPs of the "Prosperous Justice Party" - a bunch of Islamic "hardliners," as CNN put it.

"...'It is very unlikely the law will be implemented,' foreign ministry spokesman Teuku Faizasyah said Tuesday. 'The governor has already made it clear he won't support the legislation.'..."
(CNN)

Aceh has been a problem for Indonesia: and was given a measure of independence in exchange for a measure of peace.

The governor of Aceh, Irwandi Yusuf, is a former rebel who is in an unenviable position. On the one hand, he's got the "deeply devout" (or wildly wacky, depending on your point of view) religious leaders who have influence in the province.

On the other hand, the governor has foreign donors whose investments could help pull Aceh out of the mess left by his insurgency and a 2004 tsunami.

The problem, as nearly as I can see it, is that many of the foreign donors aren't all that keen on supporting an outfit that stones rape victims.

And lets get real: if a man in Aceh forces a woman to have sex with him, and they get caught, he isn't likely to say, 'I'm a rapist.' He'll say it was consensual sex, and that she's an adulteress. Unless four men break the 'good old boy' code and fess up to what happened, the dude's problems will soon be a bloody mess on the pavement.

"... Women are required to wear headscarves. Men caught gambling or drinking alcohol are whipped. Muslims are mandated to pray five times a day....

I'd be surprised if I was on the same page with Ms. Pearson: more about that later. But I do think that the new Aceh law, as reported, is good news for male rapists/seducers, and really bad news for women.

On the other hand, the imposition of Islamic culture on British swimming pools has most likely been a big disappointment to ogling men, but might not be all that bad for women, in the long run.

News from the United Kingdom:

'Under the rules, swimmers – including non-Muslims – ... must comply with the 'modest' code of dress required by Islamic custom, with women covered from the neck to the ankles and men, who swim separately, covered from the navel to the knees. [emphasis mine]

'The phenomenon runs counter to developments in France, where last week a woman was evicted from a public pool for wearing a burkini – the headscarf, tunic and trouser outfit which allows Muslim women to preserve their modesty in the water. [emphasis mine]

'The 35-year-old, named only as Carole, is threatening legal action after she was told by pool officials in Emerainville, east of Paris, that she could not wear the outfit on hygiene grounds....'
(telegraph.co.uk)

"I think the Labor Members of Parliament have a point: this is a 'divisive' point. Men in western countries have learned to expect the titillation of watching nubile young women bouncing in their bikinis on the beach. Depriving them of this (right?) certainly could be a 'divisive' issue.

"On the other hand, I'm not at all sure that something being done in France makes it sophisticated and/or a good idea.

"Sure: right now, after decades of bikinis, hot pants and nipple rings, it's hard to imagine that anyone would be mean-spirited enough to deprive hot-blooded men of their jollies. Or women of the opportunity to be regarded as 3D living color moving centerfolds...."
A Catholic Citizen in America (August 16, 2009)

Yes, This Does Connect With the War on Terror

I think the war on terror has at least as much to do with a conflict of cultures as it does with the religious beliefs of some Muslims and the increasingly secularized hodgepodge of fashionable notions in the West.

One of the most obvious and visible aspects of a culture is what people chose to wear - or are forced to wear.

A Disclaimer: I'm One of Those People

I'm a practicing Catholic: which puts me at odds with a great deal of Western culture. I am convinced that: And yeah: that makes me really counter-cultural. Which is a topic for another blog.

But They Don't Do It That Way in France!

I have long been of the opinion that Versailles is a wonderful example of architecture and landscape design; that the Louvre is a great museum, and that Charlemagne was a great leader. But I do not think that an idea is worthwhile simply because it's French.

I've discussed how the French government believes that women should be free to decide how they dress. Provided that they choose according to French standards. (Ooh! La! La!) (July 11, 2008)

Are Bikinis the Only Thing Holding Up Western Civilization?

I'd like to think that flashing flesh on the beach or in the swimming pool isn't the only thing Western civilization has left.

And, I think it's important to note that at least some flavors of Islam have a dress code that applies to men and women:

Swimmers "...must comply with the "modest" code of dress required by Islamic custom, with women covered from the neck to the ankles and men, who swim separately, covered from the navel to the knees...."
(Telegraph.co.uk)

Men in the West have gotten used to women putting themselves on display. It's a sort of tradition.

This may be a good time for people in the West to decide what they really think women are, and whether the culturally-normative floor show is really respectful and appropriate.

And, I think that an idea that "runs counter to developments in France" can still be an idea worth considering.

Related posts: In the news: Background: 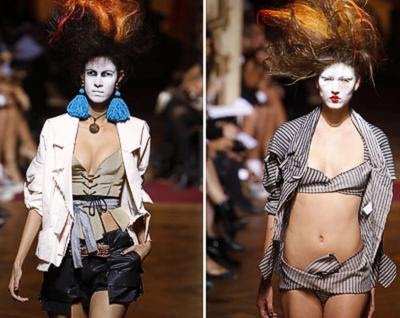 Hallo Brian,
I've just stumbled upon you. I am glad I have. This is going to take a while to absord but absorb I will. I live in Indonesia, just north of Yogyakarta on the volcano Merapi.

I have been here a long time and have a massive extended family who all tell me they are Muslims but if so why do they want Christmas presents? I tell them, yearly, I am not a Christain, but I am white you see so I must be not only rich I must be Christian.

Life where I live is similar in its relaxed atmosphere to life in Europe; too similar sometimes and I don't want to see it go much farther but who am I to stop what people want?

My website is http://duckham.tk please take a look and good luck with all your endeavours, the online versions which I will slowly have a look at!