And who says crime doesn't pay - for the right people?

Of course, there's the possibility that the Swiss government will decide to go along with an American request for extradition. Or, not. 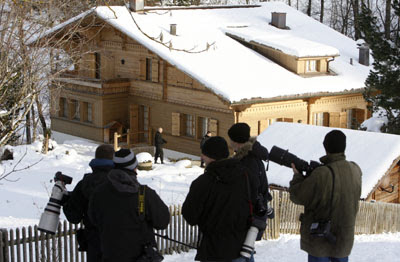 (Arnd Wiegmann, via Reuters, used w/o permission)I've made the point that, in my view, the war on terror isn't so much about religion as it is about culture. In the west, we've gotten used to the idea of not killing our wives and daughters when we're in a snit, letting them drive cars, and even letting them have jobs.1

Social upheavals after the 14th century's Black Death and the 18th century's revolutions helped establish that state of affairs.

I also think people like Queen Boudicca may have left as a deep impression on northern European cultures, as she did on the Romans. But that's another story.

Islam Isn't Monolithic - Neither is the West

An example popped up in today's news.

Roman Polanski is, no reasonable question about it, a skilled - even talented - motion picture director. I respect skill and talent in people. Part of that is probably from the set of American cultural values I learned as I grew up.

I don't approve of rape. Particularly of young teens, by men in positions of importance. That's also in part from the cultural values I picked up. What can I say? Americans, as a group, are just plain intolerant of rape.

"...The French culture and communications minister, Frederic Mitterrand, said he 'learned with astonishment' of Polanski's arrest. He expressed solidarity with Polanski's family and said 'he wants to remind everyone that Roman Polanski benefits from great general esteem' and has 'exceptional artistic creation and human qualities.'..."
(CNN)

That's very broad-minded of them: and a tribute to the cultural values of France. I don't think it's any accident that one of the greatest museums in the world, the Lourvre, is in France.

What upset the French government, and brought it to the defense of this exception artist and child rapist ("alleged," of course) was Italy's arrest of Roman Polanski: a shocking display of insensitivity.

Apparently Italy doesn't consider great artists to be "beyond good and evil."

I'd have a little more respect for the French position, if the argument had been one of legal jurisdiction, or a perception that Mr. Polanski wouldn't get a fair trial in America. I might not agree: but either argument could be based on principles that I can respect.

But no. France seems to regard Roman Polanski as immune by reason of his "exceptional artistic creation and human qualities."

But I don't assume that rapists are dirty, smelly people who are not of my ethnic group(s) and/or below me in economic status. And, that 'great artists' or 'the right sort' don't rape, unless the victim is also of 'the right sort:' but instead that they 'get mixed up' with the lower classes from time to time.

Yeah: the west has its cultural differences, too.

Related posts: In the news: Background: 1 "Letting"?! my forebears are from Ireland and Norway, for the most part - two European enclaves which didn't "let" women do what they willed, any more than they "let" men act. To a great extent.

I'll grant that they got downright "civilized" from time to time: but nobody's perfect.

2 Don't get me wrong: I have great respect for French achievements. France has been one of the great cultural hubs of Europe.