Professor Ward Churchill is Back: A Glorious Victory for Academic Freedom, Tenure, and the American Academic Way

Wherever would we be, without academic freedom, American style?

Professor Ward Churchill wasn't fired for writing and saying that people in New York City's World Trade Center deserved to die, because they were "little Eichmanns" - that's the sort of thing that's covered by academic freedom and tenure. He lost his job because he plagiarized - and got caught - in circumstances that would have made ignoring the intellectual theft embarrassing.

Professor Ward Churchill's vindication in the courts, and his return to the hallowed halls of academia, mark a victory for academic freedom and freedom of expression.

Like this piece of art, created by associate professor Paul Myers, University of Minnesota, Morris: 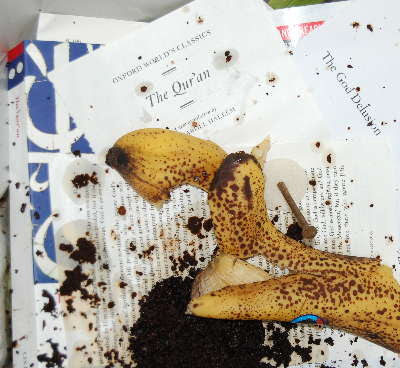 (from pharyngula, scienceblogs.com, used w/o permission)

It's what professors do. The freedom to write and do outrageous things is very important to the academic community.

Deeply buried under contemporary American academia's value system is an extremely important issue: freedom of expression. I've written posts on that before.

I've written about professor Ward Churchill before, too. Including this excerpt:

Professor Ward Churchill achieved national fame in September of 2001, when he wrote an essay titled "Some People Push Back: On the Justice of Roosting Chickens" in which he compared "technocratic corps at the very heart of America's global financial empire" working in the World Trade Center as "little Eichmanns," a professorial quote taken from a Wikipedia article.

In 2003, Professor Churchill wrote a prize-winning book entitled "On the Justice of Roosting Chickens: reflections on the consequences of U.S. imperial arrogance and criminality" (ISBN 1-902593-79-0). (Again, thanks to Wikipedia for bringing this information together.)
(July 24, 2007)

The Keetoowah Tribe's leadership is free to bestow honorary membership on anyone they like: I have no problem with that. I wouldn't seek it out myself: my ethnic background is eclectic enough as it is.

Professor Churchill says the Keetoowah Tribe's lying. He could be right: they could be part of a vast conspiracy to keep people from knowing that the CIA blew up the World Trade Center. It's even remotely possible that all members of the Keetoowah Tribe are shape-shifting space alien lizard people. (Possible, but wildly improbable.) (January 14, 2009)

There is freedom of expression on the Internet - for now. A few years ago there was a well-intentioned (I trust) effort to 'save the children' from online pornography. The issue is a serious one.

I'm a devout Catholic, so you'd think that I'd be all for clamping down on those nasty pornographers. I am. But I don't think that creating government agencies to decide what nice people are allowed to see, and not allowed to see, is a good idea. At all.

When outfits like the Christian Coalition and the Feminist Majority became allies to 'save the children,' and both want Big Brother to look out for the common people: I get very concerned. Maybe it's my sixties roots.

So far, the Internet is free. People, including myself, can express ideas whether or not they're popular, or conform to the ideals of a journal's review board, or satisfy a government agent's idea of what's naughty and what's nice. I trust an open marketplace if ideas a great deal more than I do experts, picked for their proper views.

Academic Freedom - For All?

I'd be a little more impressed with "academic freedom," if I hadn't been in universities and colleges for much of the seventies and eighties, and didn't study the news. Professor Ward Churchill and associate professor Paul Meyers enjoy academic freedom. They also just happen to have views which are accepted by most American academics. Sometimes heartily accepted, sometimes not: but 'everybody knows' that the right to repeat rumors about how nasty America and capitalism and related topics is important.

As far as they go, they're right.

I'd be much more impressed with American academia, if a meteorologist with a national audience - and heretical views on Global Warming - hadn't been yanked from public view. (April 29, 2008) The institution of higher education that pulled the plug on Dr. Gray's hurricane coverage says it was budget considerations, not heresy. Dr. Gray insists that they're right I don't blame him. He's got his career to think of. And, the budget might have something to do with the decision. (March 31, 2009)

If Dr. Gray's was an isolated case, I'd assume that the official explanation was accurate. As it may be: as far as it goes. But there are quite a few 'Dr. Grays' out there - and I think they're starting to be heard. (December 16, 2008)

A thorough re-examination of American academia's culture, assumptions, and rules is decades-past overdue. I doubt, very much, that any fuss by "unsavory Ward Churchill online critics" (Not My Tribe)

Until academic reform happens, American citizens will continue to pay taxes which go, in part, to supporting people like professor Ward Churchill and associate professor Meyers. People with approved views will continue having their right to be outrageous: and enjoy the assurance that opposing views will be afforded equal - but separate - protection.

Man, your posts are so long and thought out. They always make me think. Academic freedom, in my opinion as an educator, should be within the academic standards the state has articulated democratically. Freedom to use tools and methods to teach them effectively is what it's about for me (teacher gr 4). When you get up to the college levels, many lose that definition. They see it as the right for one person to define and/or redefine those standards. That's when it can get bad for people. Fortunately for me, I ran across a few professors like that in my college years and I know how to pass their classes: "Say what you want them to say" LOL. I've taken your post afield I'm afraid. :)

Thank you for the comment - and the good words. You're in an exciting part of the educating field.

About "Say what you want..." - the family saying, two generations old now, is "learn it for the test."

And, I'm not at all sure that you've gone very far from this post's topic. I keep coming back, in this blog, to the use, misuse, and control of information.

Use the blog's search function and search the word

and you may see what I mean.