Russia and Georgia is America and Iraq: Everybody Knows That!

I heard one of the talking heads on a business show say, in passing, that America couldn't complain about Russia's invasion of Georgia, because America invaded Iraq.

He even paraphrased "everybody knows."

His assumption isn't as crazy as it seems. At least, quite a few people agree with him. Their line of reasoning seems to be this: You can't argue with logic like that.

My guess is that what's stirred up this month's 'invasion of Iraq was based on lies' enthusiasm is the upcoming American presidential election, exacerbated by a new book. I know: That last item is almost five years old. The point is, this assumption of faked intelligence is nothing new. It may even, to some extent, be true.

Or, we could be looking at Monday morning quarterbacking on a massive scale.

Why the Coalition Invaded Iraq

It's easy now, years after a brutal tyrant has been deposed, to say that the invasion of Iraq was a mistake. Particularly since no weapons of mass destruction have been found. So far.

However, back then, leaders from a significant fraction of the world's nations saw credible evidence that Saddam Hussein was developing, or already had, biological weapons: and was developing nuclear weapons. Quite a number of Kurds had found out, the hard way, that Hussein had chemical weapons: and a willingness to use them.

Those leaders had choices: America, and the rest of the coalition, decided to take option 2.

The intelligence may have been wrong.

We See No WMD, So There Are No WMD?

Or, it may have been correct. Iraq is a big country: much larger than Massachusetts or Maryland. A lot of it is desert. A comparison may be useful:

I grew up on the edge of North Dakota, a state which has miles and miles of miles and miles. Trucks and snowmobiles stranded between towns generally get found: but the drivers want to be found. 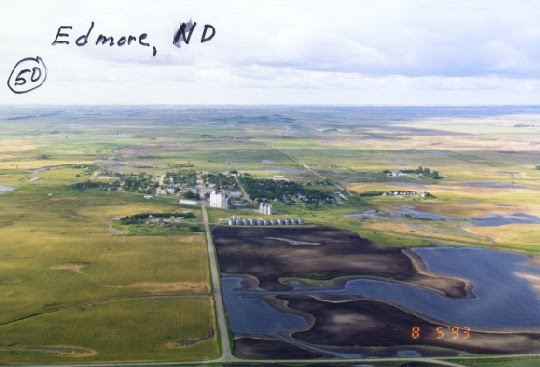 (from U.S. Geological Survey, North Dakota Water Science Center, used without permission)
That photo is of Edmore, a town in one of the cozier parts of North Dakota. Most of the state isn't that densely populated.

The next photo shows a very large petroleum terminal in Iraq. I'm quite sure that if railroad-car-size containers with weapons of mass destruction inside were hidden inside that terminal, coalition forces would have found them by now. 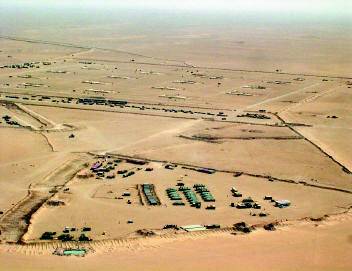 (from U.S. Army Quartermaster Center and School, used without permission)
'Okay, men: there are a dozen cargo containers buried out there. Go find them!'

Whether containers buried somewhere in the lands beyond the horizon would have been found by now is another question.

Russia had a pretty good reason for invading Georgia. Russia, naturally, rolled troops and tanks in, destroyed Georgian military supplies, sank or took much of the Georgian navy, took over a major highway, and the Georgian city of Gori.

An Expert Wrote a Book

As I said earlier, some of this month's 'Bush Lied' talk seems to stem from a recently-publicized book: "The Way of the World: A Story of Truth and Hope in an Age of Extremism" by Ron Suskind.

Suskind could be right, "that in 2003 the White House ordered the CIA to forge and disseminate false intelligence documents linking al-Qaeda and Iraq." (Democracy Now!)

It's possible that America has been embroiled in a web of lies and deceit, and that "America's" invasion of Iraq was just like Russia's invasion of Georgia. But I don't think it's likely.

Any more than I think it's likely that the Ames strain of anthrax was really developed in a secret slave-labor lab under Crawford, Texas.

To me the big problem with the "WMD's may still be hidden somewhere" idea is "what's the point of having them if you're not going to use them when there's an existential threat to your country, as well as an even more existential threat to the country's leader?" In other words, when the United States invaded Iraq, what did Saddam have to lose? He knew his military couldn't repel the invaders with conventional weapons, and he knew his life was as good as over. Why not at least make things as unpleasant as possible, and take out as many Americans as he could, before the inevitable came to pass?

Hubris. Maybe he did think his army could repel the Americans and their allies. Or maybe he was counting on the UN stepping in and saving his sorry butt.

Brigid beat me to it, with many of my points.

She left out the possibility of broken communication links as the invasion progressed.

Also, it wasn't just the UN that Saddam Hussein may have been counting on. As I recall, some European countries didn't approve of the coalition's actions: and Hussein may have assumed that old Europe was as powerful as the traditional colonial powers think they are.

for one thing there was no creditable evence linking saddam to WMD. top CIA anylists resigned in protest before USA invaded iraq over this matter.israel tricked USA in that one with american jewish accomplices like douglas fieth .and the USA didn't give a dam about saddam using chemical weapons. firstly it was USA which supplied iraq will chemical weapons to help win the war against iran.and after the first gulf war it gave permission for the iraqis to fly over certain areas so they could gas the kurds and the people of basra who rose up against saddam at the request of USA.and USA didn't lift a finger to help the kurd or people of basra even thou USA had hundreds of thousand of troop nearby.they basicly just watched saddam saughter thousands.george bush 1 and don rumfield should have been charged with war crimes with saddam for that one.and the funny thing is bush 2 used it to convict saddam even when he knew the truth about his father.

I thought this would attract one of the Anonymous community.

For you, no: there is no credible evidence. It looks like you have decided that Saddam is innocent of any links to WMD, and so any evidence of such a connection is not credible.

And, of course, there is evidence for your position: "israel tricked USA in that one with american jewish accomplices like douglas fieth ...."

I'm none too happy about how the Kurds fared after the Kuwait war, but I don't think blaming the Jews is reasonable.